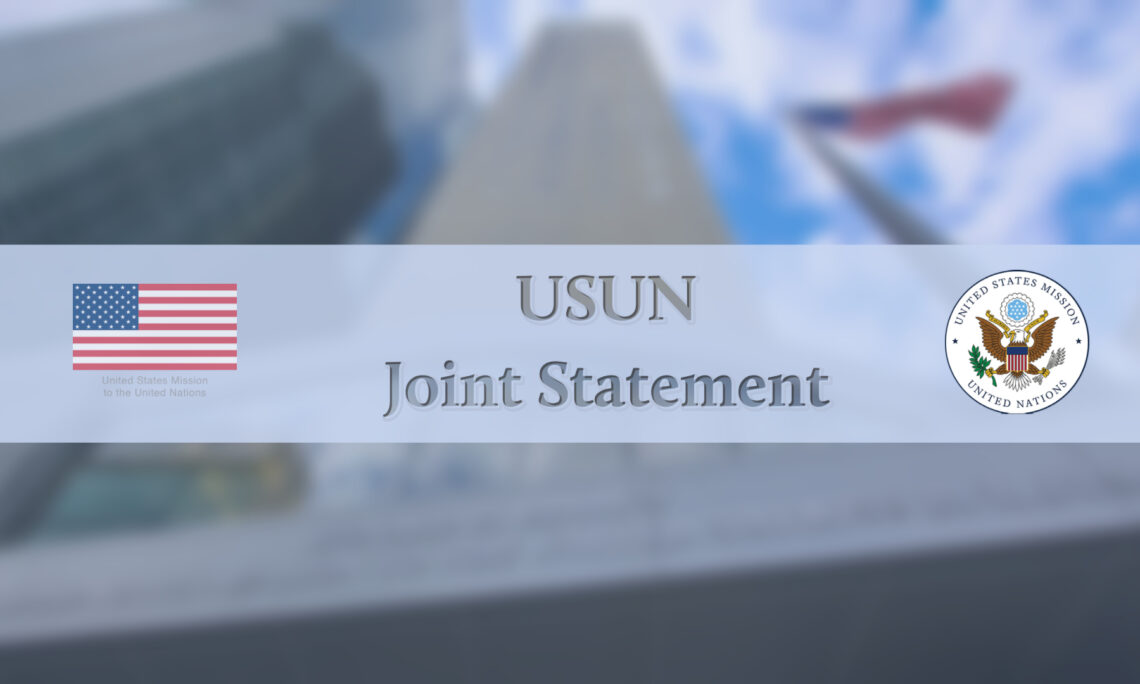 Joint Statement on the Human Rights Situation in the Democratic People’s Republic of Korea
(The following is a joint statement delivered by the Ambassador Christoph Heusgen, Permanent Representative of the German Mission to the United Nations, on behalf of Belgium, the Dominican Republic, Estonia, France, Germany, Japan, the United Kingdom, and the United States.)

The egregious human rights situation in the Democratic People’s Republic of Korea (DPRK) is well known to the international community and has been documented, inter alia, by reports of the Office of the High Commissioner of Human Rights (OHCHR), the Commission of Inquiry on Human Rights in the DPRK (COI) as well as the Special Rapporteur on the situation of human rights in the DPRK. The COI determined that the DPRK commits crimes against humanity and that “the gravity, scale and nature of [the DPRK’s] violations reveal a state that does not have any parallel in the contemporary world” and that those crimes are committed “pursuant to policies established at the highest level of the State.”

An estimated 100,000 persons, including children, are imprisoned in political prison camps, where they are subjected to torture, forced labor, summary executions, starvation, sexual and gender-based violence, and other forms of inhumane treatment. Many are detained in these camps because of the DPRK’s system of guilt-by-association, which allows for up to three generations of family members, including children, to be imprisoned along with the accused. Women in particular are subjected to multiple and serious human rights violations by State security and police. Indeed, OHCHR highlighted in a recent report, published in July 2020, that many women who are forced to return to the DPRK are subjected to human rights violations, including those involving torture, ill treatment, and sexual abuse.

The DPRK government seeks and, in many ways, has achieved total control over the lives of the North Korean people. Defectors have reported that everyone age 12 and older is required to attend public executions, which serve to remind citizens of the consequences of opposing the government. Universal human rights, as enshrined in the Universal Declaration of Human Rights, including the freedoms of expression, peaceful assembly, association, movement, and religion or belief, are so severely restricted that they are in practice non-existent. Foreign media are banned, and radio and television are fixed to state media channels.

Tens of thousands of North Koreans have fled the country. Governments along the way often detain and forcibly repatriate asylum seekers. When they are forcibly returned, would-be defectors are reported to be subjected to torture, sexual violence, imprisonment, forced abortions, and in some instances execution.

The DPRK is using the global pandemic to crack down further on the human rights of its own people. We are deeply disturbed by a reported uptick in executions related to COVID-19, as well as strict controls on movement in and around the capital. The government’s decision to prioritize its weapons programs over the needs of its people and their isolation from the international community, is inevitably worsening the impacts of the pandemic on the North Korean population.

Today, Belgium, the Dominican Republic, Estonia, France, Germany, Japan, the UK and the US reemphasize the importance of a discussion of this topic in the Security Council as the DPRK’s human rights violations pose an imminent threat to international peace and security. The DPRK government diverts resources away from its people to its illicit ballistic missile and nuclear programs. Indeed, the DPRK’s human rights violations, including forced labor, underwrite these programs. In order to ensure international peace and security, it is imperative that the DPRK shall abandon all nuclear weapons, its ballistic missile programs and its existing nuclear and other weapons of mass destruction programs in a complete, verifiable and irreversible manner in accordance with relevant Security Council resolutions. The failure to respect human rights is also part and parcel to the DPRK’s hostile policies towards its neighbors, including the issue of international abductions of Japanese and other citizens. We strongly urge the DPRK to resolve all issues related to these abductees at the earliest possible date, in particular their immediate return.

One day after we celebrated International Human Rights Day, we also express our gratitude for the work of the UN Special Rapporteur on the situation of human rights in the DPRK and the Office of the UN High Commissioner for Human Rights, and ongoing reporting by non-governmental organizations, to bring to light the DPRK’s malign actions. To conclude, we urge the DPRK to end its human rights violations, engage credibly with the international community on its human rights record and to allow the UN human rights mechanisms free and unhindered access to the country.