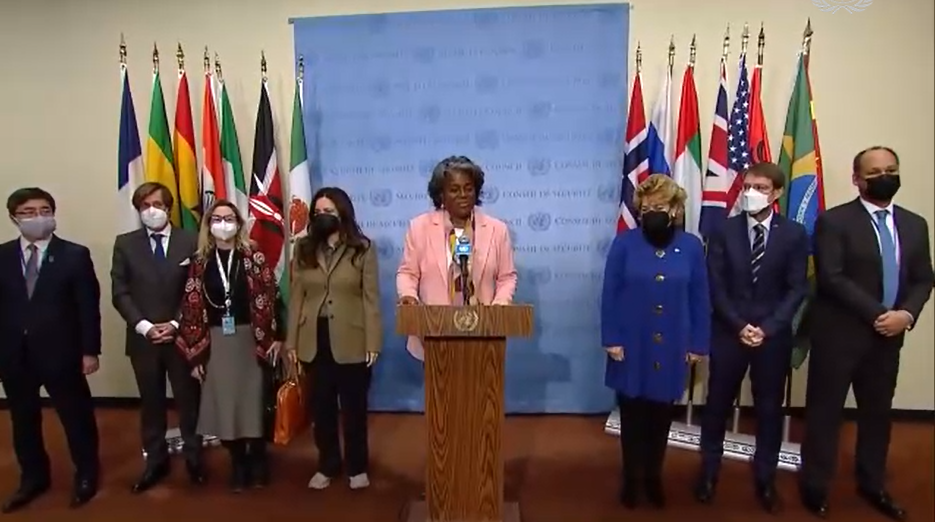 The following is a joint statement as delivered by Ambassador Linda Thomas-Greenfield, U.S. Representative to the United Nations, on behalf of Albania, Brazil, France, Ireland, Japan, the United Arab Emirates, the United Kingdom, and the United States.

The DPRK has announced that it conducted the launches on four occasions in the last two weeks. The DPRK itself published photos that confirm the launch of ballistic missiles following all four launch events. And we know that DPRK missile launches that use ballistic missile technology violate Security Council resolutions.

These facts should not be in dispute. The DPRK’s unlawful behavior is a threat to international peace and security. These launches demonstrate the regime’s determination to pursue weapons of mass destruction and ballistic missile programs at all costs, including at the expense of its own people.

Albania, Brazil, France, Ireland, Japan, United Arab Emirates, the United Kingdom, and the United States call on our fellow Council members to be unified in condemning the DPRK for its acts in violation of UN Security Council resolutions. It is this unity, in speech and action, that has helped in the past bring the DPRK to the negotiating table and could advance stability for the region and international community.

We urge the 1718 Committee to proactively support implementation of the Security Council resolutions addressing the DPRK. This includes sanctions designations for those contributing to the DPRK’s unlawful weapons programs, like those the United States proposed last week.

We also call on all Member States to implement Security Council resolutions, to which the Security Council unanimously agreed, and which calls on the DPRK to abandon its weapons of mass destruction and ballistic missile programs in a complete, verifiable, and irreversible manner. It is extremely important that Member States take the necessary steps to implement the sanctions in their jurisdictions, or risk providing a blank check for the DPRK regime to advance its weapons program.

We will continue to speak out against the DPRK’s destabilizing actions as affronts to regional and international peace and stability. We call on the DPRK to cease these unlawful actions and return to dialogue. We stand ready to support a meaningful return to engagement and diplomacy without preconditions. And we reaffirm our commitment to achieving lasting peace and stability in the region, and to the complete denuclearization of the Korean Peninsula, in accordance with relevant Security Council resolutions.