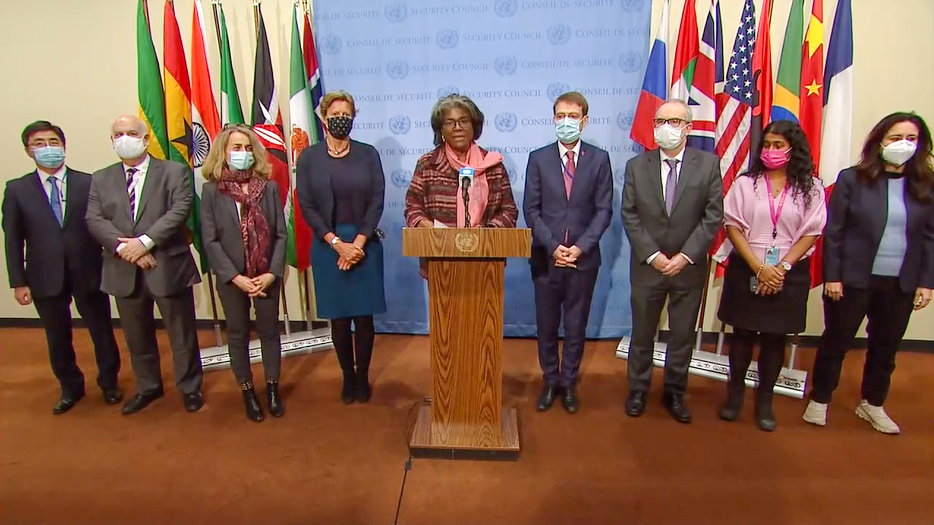 The following is a joint statement as delivered by Ambassador Linda Thomas-Greenfield, U.S. Representative to the United Nations, on behalf of Albania, Brazil, France, Ireland, Japan, Norway, the United Arab Emirates, the United Kingdom, and the United States.

The DPRK’s January 30 (local time) launch of an intermediate-range ballistic missile (IRBM) is a significant escalation in the DPRK’s recent violations of multiple Security Council resolutions and seeks to further destabilize the region. We condemn this unlawful action in the strongest terms.

This IRBM marks the regime’s longest-range test since late 2017. It also marks a new and troubling record – the nine ballistic missiles launched in January is the largest number of launches the DPRK has conducted in a single month in the history of its WMD and ballistic missile programs.

We also welcome the Secretary General’s statement on Tuesday, which condemned the DPRK’s IRBM launch as a clear violation of Security Council resolutions.

We call on all Council members to speak with one voice in condemning these dangerous and unlawful acts. Albania, Brazil, France, Ireland, Japan, Norway, the United Arab Emirates, the United Kingdom, and the United States have been clear and unequivocal in expressing concern over the DPRK’s continued Security Council violations and its alarming behavior.

The cost of the Council’s ongoing silence is too high. It will embolden the DPRK to further defy the international community; to normalize its violations of Security Council resolutions; to further destabilize the region; and to continue to threaten international peace and security. This is an outcome that we should not accept.

We urge all Member States, and particularly our fellow Council Members, to play a constructive role in the implementation of Security Council resolutions addressing the DPRK, which obligate the DPRK to abandon its weapons of mass destruction and ballistic missile programs in a complete, verifiable, and irreversible manner. The international sanctions regime is an important tool for addressing the threat posed by the DPRK’s unlawful WMD and ballistic missile programs.

We reiterate our call for the DPRK to cease its destabilizing actions and return to dialogue. We remain committed to seeking serious and sustained diplomacy. The DPRK must make this same commitment in order to ease regional tensions and to ensure international peace and security.

We continue to urge the DPRK to respond positively to the offers from the United States and others to meet without preconditions. We stand ready to engage in dialogue, and we will not waver in our pursuit of regional peace and stability and the complete denuclearization of the Korean Peninsula consistent with relevant Security Council resolutions.