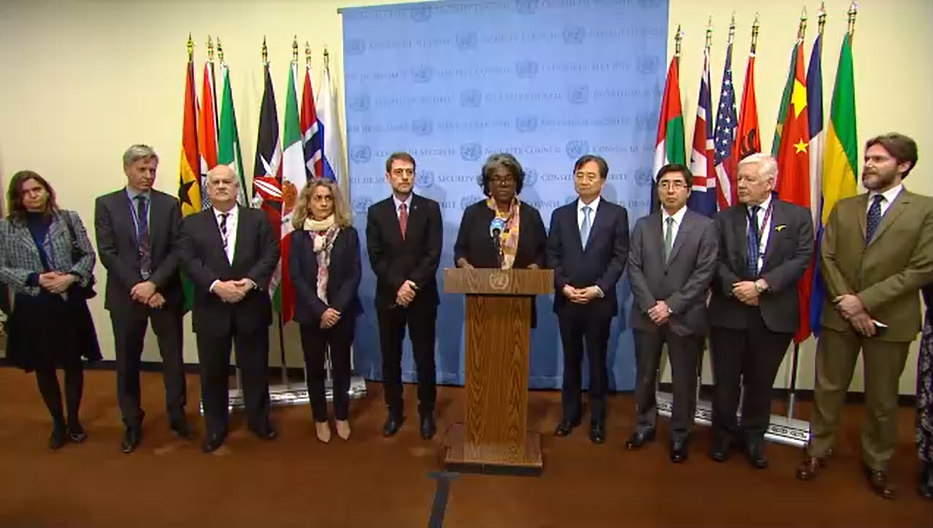 The following is a joint statement delivered by Ambassador Linda Thomas-Greenfield, U.S. Representative to the United Nations, on behalf of Albania, Australia, Brazil, Canada, France, Germany, Ireland, Italy, Japan, New Zealand, Norway, the Republic of Korea, the United Arab Emirates (in its national capacity), the United Kingdom, and the United States.

Albania, Australia, Brazil, Canada, France, Germany, Ireland, Italy, Japan, New Zealand, Norway, the Republic of Korea, the United Arab Emirates (in their national capacity), the United Kingdom, and the United States, condemn, in the strongest terms, the DPRK intercontinental ballistic missile (ICBM) launch on the morning of March 24. This launch violated multiple Security Council resolutions and poses a threat to not only the region, but to the entire international community.

Instead of returning to dialogue after repeated offers from the United States and others, the DPRK has returned to long-range weapons testing, which seeks to undermine the global non-proliferation regime and international peace and security.

This is the DPRK’s 13th ballistic missile launch this year and it is only March. We also note with alarm media reports that the DPRK may be reconstructing a nuclear testing site that had been closed in 2018, suggesting the DPRK could be preparing for a nuclear test.

The DPRK is demonstrating its determination to continue advancing its weapons programs as it escalates its provocative behavior – and yet the Council has remained silent. As the DPRK continues to progress its nuclear and missile programs, we share the importance of addressing concerns related to DPRK proliferation activities.

We call on all UN Member States, especially Council members, to join us in condemning this behavior and in urging the DPRK to abandon its weapons of mass destruction and ballistic missile programs and engage in diplomacy toward denuclearization.

We also call on Member States to fully implement the relevant Security Council resolutions. We are mindful that Security Council Resolution 2397 refers to further Security Council action in response to a DPRK ICBM launch. Let us also reaffirm that full implementation of the 1718 regime is a necessary part of effectively slowing down and restricting the DPRK’s weapons advancements.

We must act decisively, and we must act now to send a message to the DPRK and all nuclear proliferators that the Security Council will fulfill its primary responsibility to maintain international peace and security.