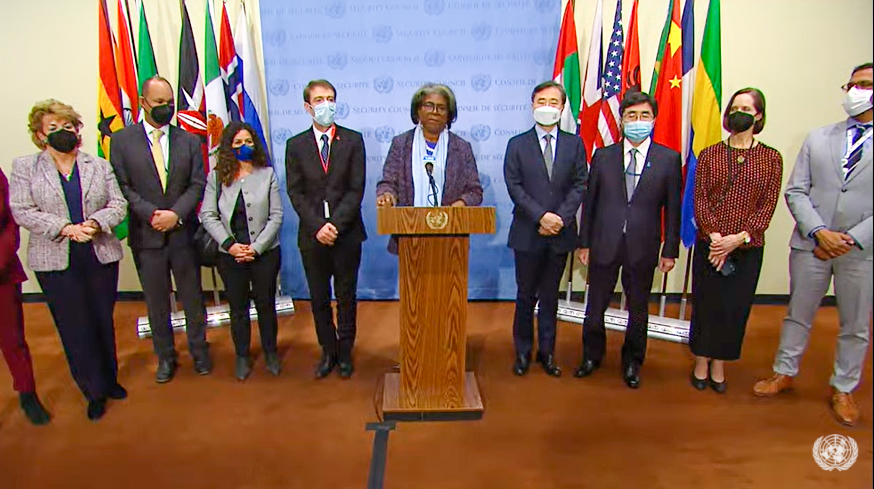 (The following is a joint statement delivered by Ambassador Linda Thomas-Greenfield, U.S. Representative to the United Nations, on behalf of Albania, Australia, Brazil, France, Ireland, Japan, New Zealand, Norway, the Republic of Korea, the United Kingdom, and the United States.)

We stand united today in condemning the DPRK’s March 5 (local time) launch of a ballistic missile. Like the 10 other ballistic missile launches since the beginning of the year, this act by the DPRK violated multiple Security Council resolutions.

While the DPRK escalates its destabilizing actions, the Security Council continues to remain silent. Each ballistic missile launch that results in inaction by the Council erodes the credibility of the UN Security Council itself in addressing the DPRK and undermines the global non-proliferation regime.

We remain committed to seeking serious and sustained diplomacy with the DPRK. The United States and others repeatedly have offered dialogue without preconditions, but the DPRK has failed to respond. Instead of embarking on a path of diplomacy and de-escalation, the DPRK has chosen to carry out an increasingly escalatory series of ballistic missile launches in violation of international law.

We stand ready to collaborate and determine a mutually agreeable approach with other Council Members to address the DPRK’s provocations. But let us start with the basic premise that the Council has a responsibility to speak publicly about clear and repeated violations of Security Council resolutions.

We call on all Council members to speak with one voice in condemning these dangerous and unlawful acts. Albania, Australia, Brazil, France, Ireland, Japan, New Zealand, Norway, the Republic of Korea, the United Kingdom, and the United States have previously expressed our concerns clearly and unequivocally.

We urge all Member States to implement fully all Security Council resolutions relating to the DPRK. These Security Council resolutions also obligate the DPRK to abandon its weapons of mass destruction and ballistic missile programs in a complete, verifiable, and irreversible manner. The international sanctions regime is an important tool for addressing this threat to international peace and security.

We reaffirm our commitment to diplomacy as the means for achieving the complete denuclearization of the Korean Peninsula. We urge Pyongyang to respond positively to outreach from the United States and others. We continue to call on the DPRK to choose the path of dialogue over instability and to prioritize the basic needs and human rights of its own people over its unlawful WMD and ballistic missile programs.