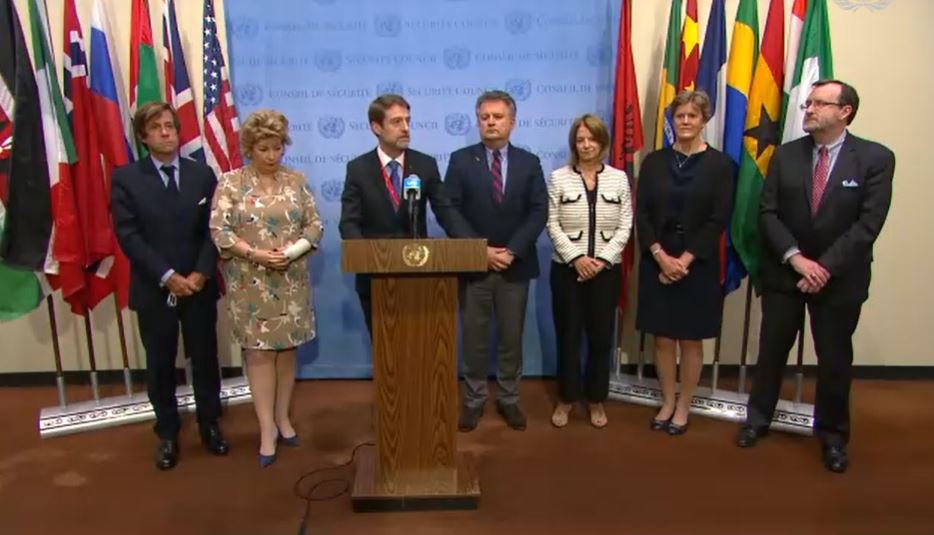 Joint Statement on the Recent Developments in Ukraine

The following is a joint statement as delivered by the Permanent Representative of Albania on behalf of Albania, France, Ireland, Norway, the United Kingdom, the United States, and Ukraine.

Today the Security Council convenes under the agenda item Maintenance of Peace and Security of Ukraine an urgent meeting to discuss the latest developments in Ukraine following the most recent strikes on civilians by Russian forces in Kremenchuk.

We, members of the Security Council namely France, Ireland, Norway, United Kingdom, United States, and Albania, joined by Ukraine, reiterate our full support for the independence, sovereignty, and territorial integrity of Ukraine within its internationally recognized borders.

We strongly condemn the intensification of Russian missile strikes on the territory of Ukraine, targeting residential areas and civilian infrastructure, over the period of 25-27 June 2022.

We condemn in the strongest terms the killing of civilians as a result of these missile attacks, in particular the attack that hit a crowded shopping center in Kremenchuk, Poltava region of Ukraine. This strike was a blatant attack on civilian infrastructure and civilian population.

We express our deep sympathy and our condolences to the families of the victims and stand in solidarity with the Ukrainian people.

We express our deep concern about the high number of civilian casualties and deteriorating humanitarian situation due to the ongoing military aggression of the Russian Federation against Ukraine.

We strongly condemn all violations of international humanitarian law and reiterate our call for parties in armed conflict to strictly abide by the Geneva Convention of 1949 and Additional Protocol I thereto, of 1977, as applicable.

We underline the need to conduct an objective, professional and independent investigation, to hold to account those who violate international humanitarian law and bring the perpetrators of war crimes to justice. In this respect, we fully support the ongoing investigation of the ICC, the Office of the Prosecutor General of Ukraine and other international investigations. We call on all states to cooperate fully with efforts to ensure accountability.

We demand an immediate cessation of the hostilities by the Russian Federation against Ukraine, of all attacks against civilians and civilian infrastructure, and the full and immediate withdrawal of the Russian forces and military equipment from within Ukraine’s internationally recognized borders and territorial waters.

We recall the obligation of all Member States under the Charter of the United Nations and international law to settle their international disputes by peaceful means.