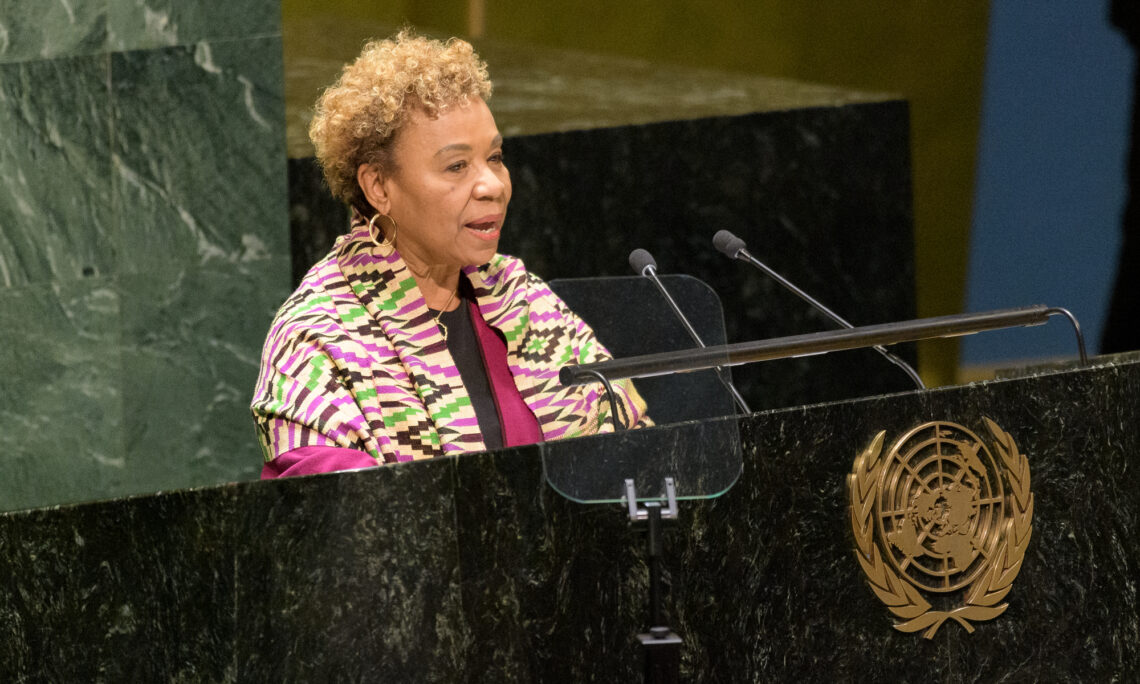 Mr. President, I have the unique honor of addressing you on this important occasion as both a Member of Congress and one of this year’s United States Congressional Delegates to the United Nations General Assembly. As we commemorate the abolition of slavery and the transatlantic slave trade, let us reflect on the profound words of self-emancipated enslaved person, abolitionist, orator, global luminary, and diplomat, Frederick Douglass. “Abolition of slavery,” he said, “had been the deepest desire and great labor of my life.” These words prompt our remembrance of the victims and descendants of slavery and the transatlantic slave trade.

The transatlantic slave trade forced millions of people from their homes, families, societies, and countries, and subjected them to exploitation and dehumanization, creating a global enterprise of unparalleled wealth for Western nations and fueling the global economy. Chattel slavery remains an immoral and indelible stain on the history of the United States, the Western hemisphere, and the collective chronicle of our inhumanity.

We acknowledge the myriad atrocities of slavery, and continue to grapple with the racial, ethnic, gender, economic, social, and political hierarchies it created. And yes, we must honor the victims of slavery by dismantling its institutional remnants, such as racism, discrimination, economic inequity, marginalization, and systematic underdevelopment.

The United States must address the multidimensional legacies of slavery through an unprecedented commitment to racial equity, justice, and inclusion within our borders and throughout our global affairs. We have demonstrated our commitment nationally through a government-wide approach to addressing systemic inequity. Today, the President of the United States, Joseph R. Biden, will sign the Emmett Till Antilynching Act of 2022, recently passed by the United States Congress. It has been over 120 years since Congress’ first attempt to criminalize the horrendous act of lynching and yes, today, it will be finally made a federal hate crime.

Members of both House and Senate have supported legislation that acknowledges and address the remnants of our racialized past stemming from the institution of chattel slavery. Legislation like H. Con. Res. 19, urging the establishment of a United States Commission on Truth, Racial Healing, and Transformation; H.R. 40, a Commission to Study and Develop Reparation Proposals for African Americans; and H.R. 1280, the George Floyd Justice in Policing Act are all examples of how Congress is grappling with the need for systemic change and redress.

And last year, President Biden signed into law, making Juneteenth – that’s June 19th – a national holiday. It was on this day in 1865, that Union soldiers arrived in Texas to announce that Black people were free. Now, this was two-and-a-half years after the Emancipation Proclamation. This announcement was made in Galveston, Texas, which is the home of my grandfather and my great-grandmother.

Now on the global stage, we championed the establishment of the Permanent Forum on People of African Descent and supported the International Independent Expert Mechanism to Advance Racial Justice and Equality in Law Enforcement. And I, personally, fought for our participation in the movement to establish the beautiful Permanent Memorial Honoring the Victims of Slavery and the Transatlantic Slave Trade right here in a prominent spot at the United Nations. And I was honored to witness the establishment of the International Decade for People of African Descent.

Despite these promising efforts, there is still so much work to do to achieve full equity in the United States and globally. And so, we must embrace this momentous occasion as a clarion and dynamic call to engage and to move forward.