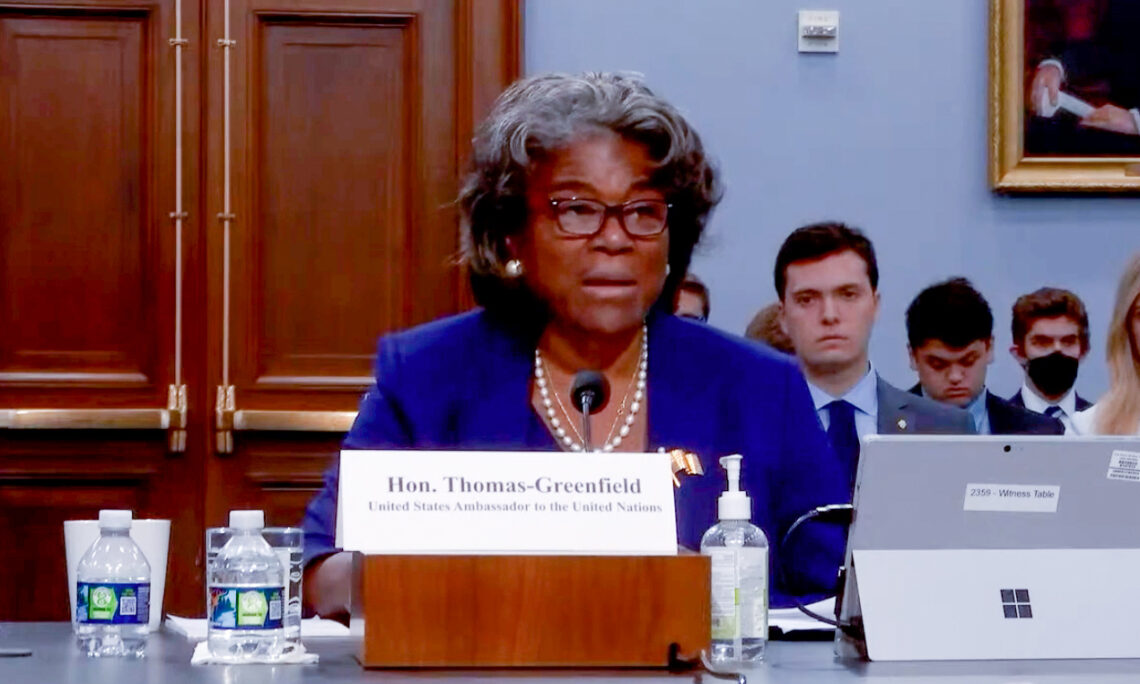 We have not shied away from pushing for comprehensive reforms to make these institutions more transparent and accountable to U.S. taxpayers. And, along with our allies and partners, we have tackled a range of challenges head-on – including public health threats, climate change, conflicts and humanitarian crises around the world.

In just over a year and a half at the UN, I have met with senior representatives from nearly every Member State. I’ve been able to strengthen longstanding relationships and forge new ones. And so, when crises have emerged, we have been ready.

Before President Putin carried out his further invasion of Ukraine, the U.S. went to the Security Council to expose Russia’s plans to the world. And after he launched this unprovoked, unlawful, and brutal war, we mobilized over 140 Member States to condemn Moscow’s action, and it was a unified and historic vote – bigger than anyone could have expected. We then led efforts to suspend Russia from the Human Rights Council. And we’re continuing to use every tool at our disposal to hold Russia’s forces accountable.

This multilateral strategy is effective not just in supporting Ukraine – but across the board. Our multilateral engagements helped lead to truces – however fragile – in Ethiopia and Yemen that have allowed for the delivery of urgently-needed humanitarian assistance.

And the UN, in partnership with the G7, has helped us respond to the recent spike in global food insecurity – another consequence of Russia’s war of aggression. Just last month at the UN, Secretary Blinken hosted the Global Food Security Call to Action ministerial where we rallied the world to respond to this worsening crisis. Over 80 countries have aligned with our roadmap to combat global food insecurity, which calls for increased humanitarian assistance and in-kind food donations, among other actions.

On nearly every issue and conflict, our multilateral engagement is delivering concrete outcomes for the U.S. and helping advance our values around the world.

But let me be crystal clear: China and Russia are working day and night to drive an alternative, authoritarian agenda at the UN and other multilateral institutions. And they are putting significant resources and personnel behind their efforts. Right now, at the UN, to paraphrase President Biden, we are in a fight for the soul of the world.

It would be a grave mistake to cede the UN and other multilateral fora to China – which is why the President’s budget asks for the resources and authorities needed to assert U.S. leadership. Currently, our failure to live up to our financial obligations at the UN gives our adversaries an easy talking point – one they hit us with again and again. We need to be able to pay our bills in full and on time, and this will bolster our credibility and our leadership. The President’s budget also asks for additional support for UN peacebuilding efforts – a worthwhile investment that helps prevent costly conflicts before they erupt. And it asks for authority and funding to enable U.S. leadership in organizations like UNESCO.

In the absence of U.S. leadership, China and others have been more assertive at UNESCO, seeking to shape international consensus on issues like emerging technologies and artificial intelligence in ways hostile to democratic values. We need a seat at the table when international standards and best practices are being set so that we can advance our values.

Finally, we have a series of personnel requests in this budget, including much-needed increases in housing allowances for Foreign Service Officers in New York – and investments that will allow more young and diverse Americans to serve at the United Nations. These are modest budget requests. But they speak to a larger priority: we need to attract – and retain – the best and the brightest if we’re going to continue to be successful.

And with the support of this Subcommittee, we will continue to be successful at leading the world the American way.

With that, I look forward to your questions.