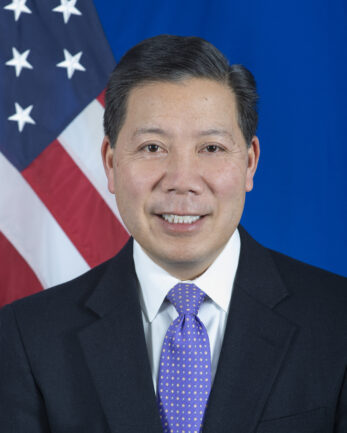 During his public service career, Chris has worked in all three branches of the federal government. From 2014 to 2017, he served as U.S. Deputy Secretary of Labor. In this role, Chris was the chief operating officer of a department with 17,000 employees and a $12 billion budget.  The son of immigrants, Chris was only the second Asian American in history to become a deputy secretary of any cabinet department.

From 2009 to 2013, he served as White House Cabinet Secretary and Assistant to the President, where he was President Obama’s primary liaison to the federal agencies. At the end of the first term, Obama said: “Through his dedication and tireless efforts, Chris has overseen one of the most stable and effective cabinets in history – a cabinet that has produced extraordinary accomplishments over the past four years.”

During the Obama Administration, Chris also co-chaired the White House Initiative on Asian Americans and Pacific Islanders, as well as the Diversity and Inclusion in Government Council.

Prior to his service in the executive branch, Chris was Legislative Director and Acting Chief of Staff for then-Senator Obama. The day after Election Day 2008, Chris was named Executive Director of the Obama-Biden transition planning efforts.

A lawyer by training, Chris began his career as a law clerk for Judge Robert E. Cowen on the U.S. Court of Appeals for the Third Circuit and a litigation attorney at Sidley Austin. He also spent eight years as Deputy Chief Counsel of the House Oversight and Government Reform Committee.

Outside of government, Chris has been a senior advisor at FiscalNote, a global technology company, and a senior fellow at the University of Virginia Miller Center.  He is the co-editor of the book, Triumphs and Tragedies of the Modern Congress, and a fellow of the National Academy of Public Administration.