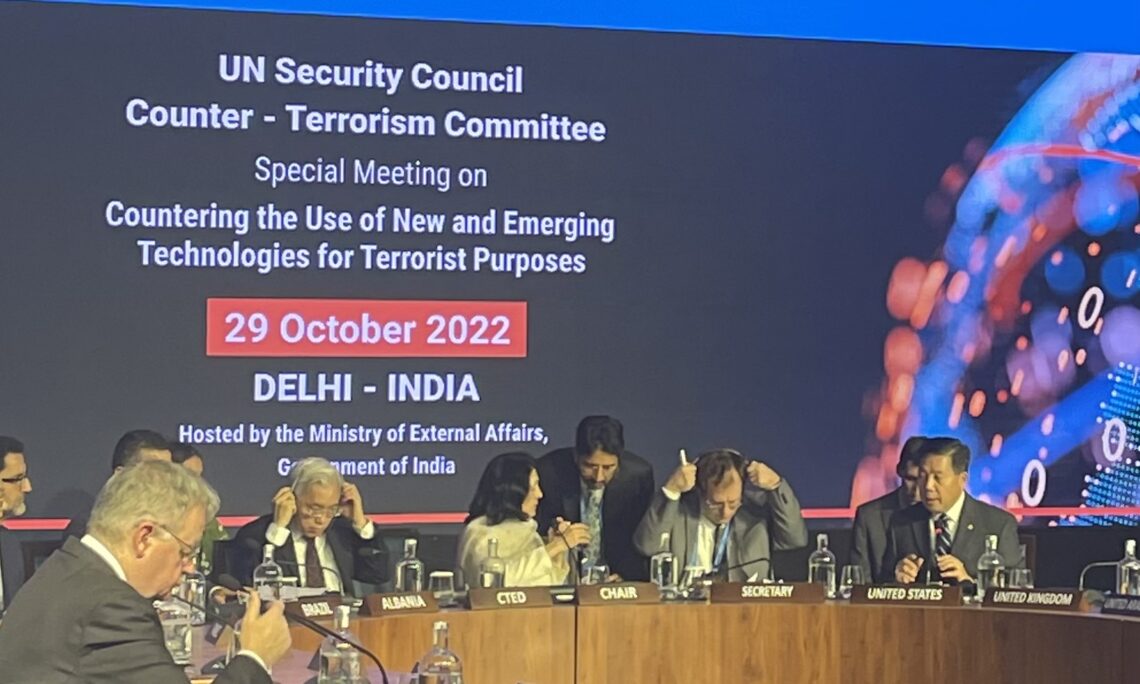 Thank you, Madam Chair. First let me thank the Government of India and the Counter-Terrorism Committee Executive Directorate (CTED) for hosting and organizing this important meeting. I especially welcome the participation of a range of civil society and private sector partners. Their input is critical to countering the use of emerging technologies for terrorist purposes.

As we heard yesterday from Secretary Blinken, the American people extend our sympathy to and express our solidarity with the people of India on the fourteenth anniversary of the Mumbai attacks and we reiterate our call for the perpetrators to brought to justice.

Today’s Special Meeting builds upon previous commitments and strategies. In line with Pillar 4 of the UN Global Counterterrorism Strategy, we must make sure that efforts to counter terrorism respect human rights.

In addition to the importance of upholding human rights in the fight against terrorism, the United States welcomes that today’s outcome document recognizes the importance of gender as a cross-cutting issue for counterterrorism. The role of gender in counterterrorism is multifaceted. In that regard, I highlight CTED’s report earlier this year on Masculinities and Violent Extremism.

Turning to the evolving terrorist threats we face, an April 2020 trend alert from CTED found that there has been a 320 percent increase in what the United States calls racially or ethnically motivated violent extremism, or “REMVE” globally in recent years. We welcome the Global Counterterrorism Forum (GCTF)’s new REMVE Policy Toolkit adopted last month as a set of recommended whole-of-society and whole-of-government responses to this emerging international terrorism challenge.

Let me turn to the three themes of this Special Meeting.

In the last year, we have seen an uptick in attacks involving weaponized Unmanned Aerial Systems. Globally, terrorists and other non-state actors have used UAS to attack critical infrastructure, and military and diplomatic facilities. We should continue to share best practices, building on existing efforts such as the GCTF’s “Berlin Memorandum on Good Practices to Counter Terrorist use of UAS.”

On the topic of emerging financial technologies for terrorist financing, we recognize the ongoing work of the Financial Action Task Force (FATF), including its discussion with the private sector on virtual assets and other developing technologies.

Innovations in the cyber space have benefited a number of our collective efforts and shared interests, including in advancing counterterrorism. However, the use of the Internet for terrorist purposes remains a major challenge for international counterterrorism, cybersecurity, and digital governance.

The United States continues to be proactive in countering terrorist content online, while respecting freedom of expression consistent with our Constitution and our long-standing support for a secure, open, trusted, reliable, and interoperable Internet. This includes voluntary collaboration with private technology companies. For example, we encourage companies to enhance and enforce their terms of service to ensure their platforms are not being used to host terrorist or violent extremist content.

However, the U.S. condemns the use of counterterrorism as an excuse to shut down, block, or disrupt communication services. These actions undermine freedom of peaceful assembly, association, and expression, they disrupt access to essential services, and negatively impact the economy.

In conclusion, while this Committee has made many important contributions to the global counterterrorism efforts, our work is not done.

As we continue to confront threats from Al-Qa’ida, ISIS, and their affiliates, including through designations in the 1267 Committee, we will also need to ramp up our collective effort to repatriate foreign nationals who remain vulnerable to terrorist predations in camps like al-Hol, in northeast Syria.

We must continue to build the political will and capacities for Member States to strengthen law enforcement and judicial systems, improve threat information sharing, enhance border security, counter terrorist financing, and strengthen terrorist prevention efforts. The United States stands ready to partner with other Member States in a way that promotes human rights and rule of law and fosters whole-of-UN and whole-of-society approaches.

Before I end. I must respond to the false claims made by the Russian Federation which seem to deflect their own wrong-doing. Its aggression in Ukraine is illegal and must end.

Thank you again to the Government of India and CTED for your work hosting and organizing this important event.