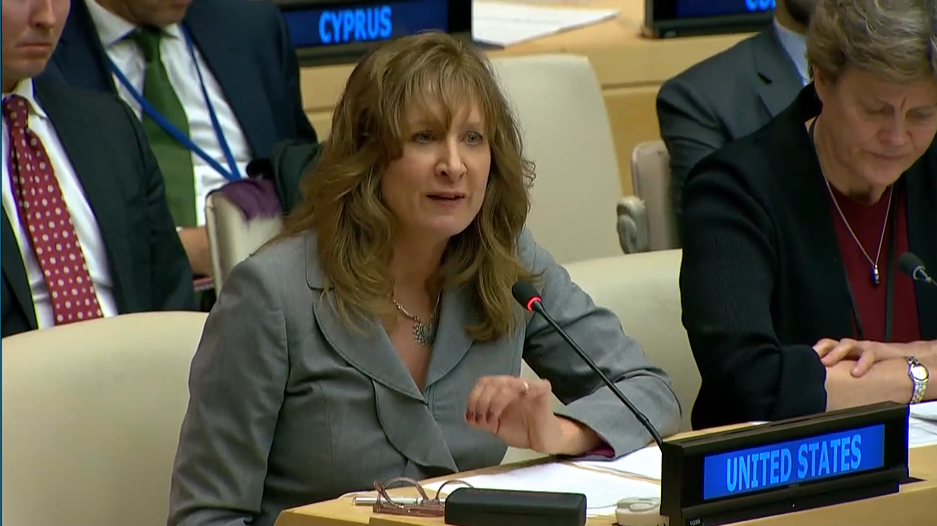 Thank you, Madam Chair. And thank you to France and Albania for convening us today. And for all the keynote speakers – your work is really critical, and we’re deeply grateful for all that you do in this matter. The United States is also quite pleased to co-sponsor this event this afternoon.

It has now been two months since Moscow launched its latest assault and further aggression on Ukraine. As Secretary-General Guterres confirmed when the war began: Russia’s war against Ukraine is unacceptable. It is a manifest violation of the UN Charter.

Russia has failed in its objective of capturing Kyiv, and it has failed in its objective of subjugating Ukraine. But we have all still seen the Kremlin inflict massive brutality across the country, and the United States has assessed that Russia’s forces are committing war crimes in Ukraine. This assessment is based on a careful and rigorous review of public sources and also intelligence sources.
At first, this violence took the form of what appeared to be deliberate and indiscriminate attacks against civilians and elements of the civilian infrastructure. Later, however, when brave journalists and human rights defenders and others gained access to areas following the Russia’s retreat, we saw violence of a different order. This was interpersonal violence: credible reports of individuals killed execution-style with their hands bound; bodies showing signs of torture; horrific accounts of sexual violence against women and girls. We now have credible information that a Russian military unit operating in the vicinity of Donetsk executed Ukrainians who were attempting to surrender, rather than take them into custody. If true, this would be in violation of a core principle of the law of war: the prohibition against the summary execution of civilians and of combatants who are hors de combat by virtue of surrender, injury, or other forms of incapacitation.

These images and reports suggest that atrocities are not the result of rogue units or individuals; they rather reveal a deeply disturbing pattern of systematic abuse across all areas where Russia’s forces are engaged.

Let us be clear: those who unleashed, perpetrated, and ordered these crimes must be held to account. And the evidence of this criminality is mounting daily. And our simple message to Russia’s military and political leadership and to the rank-and-file is this: the world is watching, and you will be held accountable.

The United States is supporting a range of international investigations into atrocities in Ukraine. This includes those conducted by the International Criminal Court, the United Nations, and the Organization for Security and Cooperation in Europe. The United States welcomes the opening of the investigation by the ICC into atrocity crimes committed in Ukraine, and we intend to engage with all stakeholders to achieve our common objectives in ensuring justice.

With many European partners, the United States is also supporting the Ukrainian national authorities – and specifically the War Crimes Units of the Office of the Prosecutor General – as they investigate and prepare to prosecute war crimes cases in Ukrainian courts. We are funding a multinational team of experts and other war crimes prosecutors deployed to the region.

This interdisciplinary team is providing advice and support to Ukraine’s Prosecutor General to collect, preserve, and analyze evidence of atrocities with a view towards achieving criminal accountability. These individuals bring years of experience at the international war crimes tribunals in the investigation and prosecution of international crimes, and they will be supporting their Ukrainian counterparts as they build their own casefiles, and we welcome other states to join in this effort.

We also stand ready to support national courts around the world in the event that they seek to establish jurisdiction over individuals accused of committing international crimes. And, of course, we welcome and will support proceedings before the International Court of Justice and the European Court of Human Rights, which are both adjudicating state responsibility.

We will also continue to assist with documentation efforts. We helped to establish the Human Rights Council’s Commission of Inquiry, ensuring that it had a strong mandate to investigate, document, and analyze violations of international humanitarian law and human rights, share that information with appropriate judicial bodies, and to identify the individuals and entities who are responsible.

We also joined 44 OSCE participating states in invoking the Moscow Mechanism fact-finding mission. The experts’ report released on April 13 has provided a meticulous and compelling account of Russia’s violations and abuses within Ukraine. It also cites evidence of the direct targeting of civilians, attacks on medical facilities, rape, executions, looting, and forced deportations of citizens to Russia. All of the information collected by these experts will be made available to the relevant accountability mechanisms, as well as any courts that may have jurisdiction now or in the future may exercise that jurisdiction.

And the regular updates from the UN Human Rights Monitoring Mission on the ground in Ukraine have greatly informed our understanding of the situation, and we commend the mission for continuing to document civilian casualties and damage to civilian objects. As the High Commissioner for Human Rights herself acknowledged, the actual number of casualties is much higher than what appears in published reports. We will no doubt learn more “as the horrors inflicted in areas of intense fighting, such as Mariupol, come to light.”

Finally, as part of our effort to advance accountability in Ukraine, the United States has released information on the immediate priorities of the European Democratic Resilience Initiative. Announced by President Biden during his visit to Brussels in March, this Initiative will provide up to $320 million in new funding to support societal resilience and to defend human rights, including through supporting accountability-related projects.

Together, each and every one of these institutions and mechanisms make up a system, inter-linked, of international justice.

At the same time, and on other fronts, the United States and other states have been working together to implement sanctions on Russia’s leadership, as well as private individuals and entities, in order to strengthen Ukraine’s hand, starve Russia of the resources it has been using to prosecute this unprovoked war of aggression, and encourage individuals subject to sanction to dramatically change course.

And finally, in close cooperation with our allies and partners, the United States has taken action through the General Assembly three times, most recently to overwhelmingly vote to oust Russia from the Human Rights Council.

We now all occupy a unique historical moment when there is a global consensus that the conduct of the Russian state is intolerable and those in command and control must not go unpunished for unleashing such violence and for violating international peace and security. At this critical moment, we must continue to coordinate international and multilateral lines of effort to advance the interlocking imperatives of justice and accountability, to preserve the sanctions* of international norms, to hold accountable those responsible, and to respond to the victims’ legitimate desires for justice.

We already have regional and international accountability institutions in place; it is now up to us to remain coordinated and single-minded in our efforts. Russia will predictably veto any effort by the Council to hold it accountable for these atrocities. But, as Ambassador Thomas-Greenfield recently said in the Council: Russia cannot veto accountability.

In closing, I know that the vast majority of Members today believe that the people of Ukraine should be able to live their lives without having the fear of their homes being destroyed by a Russian shell or of being shot with their hands tied behind their back and left dying on the street. Effective accountability measures for those who are ordering and committing atrocities will make clear that those who engage in brutality will not enjoy impunity. Together with Ukraine and our Allies and partners, we are united in our resolve to bring perpetrators to justice.