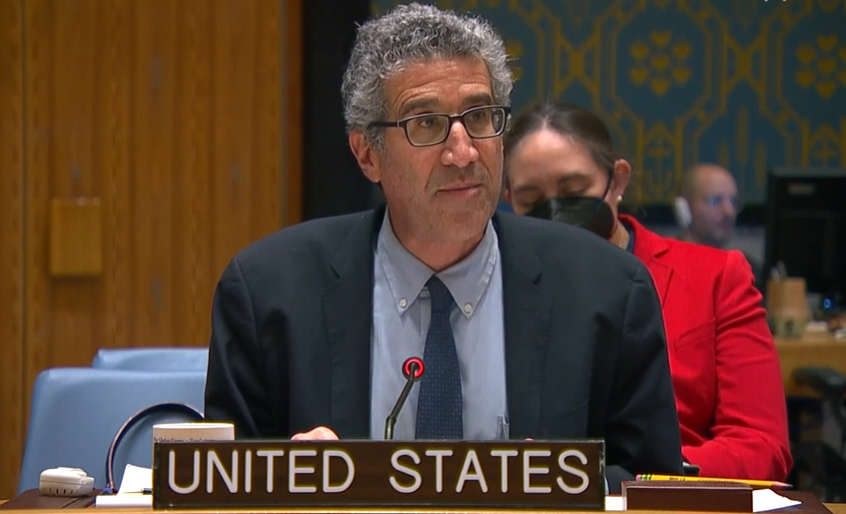 Thank you, Mr. President. And thank you, Prosecutor Khan, for your report and for your briefing to the Council today on the Court’s ongoing investigations and prosecutions regarding the situation in Darfur. We appreciate your dedication and the unwavering commitment of the judges, attorneys, and staff of the International Criminal Court to the pursuit of justice for the people of Darfur.

This is a landmark case – the first trial against any senior leader for atrocities committed by the Omar al-Bashir regime and government-supported forces in Darfur and, more importantly, the first real opportunity for justice that victims of Darfur have had. We acknowledge the bravery of all of those witnesses and victims who have come forward. We also appreciate the work of court personnel who have facilitated their participation and ensured their safety and security.

This is a crucial moment for Sudan’s future. Just a few weeks ago, the parties signed onto a framework political agreement for the restoration of Sudan’s democratic transition. After more than a year since the military takeover, this agreement, and the recent launch of Phase 2 dialogues on outstanding issues, are promising steps towards establishment of a final agreement to form a civilian government.

The Framework Political Agreement also reflects the values of the 2019 revolution, recognizing the diversity of the Sudanese people and committing to creating a new state based on core democratic principles and human rights norms. The fact that these negotiations have happened at all is a testament to the Sudanese women, men, and youth who have persistently and courageously taken to the streets to demand their rights and to call for civilian rule, despite facing violence at the hands of Sudanese security forces.

But some of the hardest challenges lie ahead as the parties begin to address a set of thorny issues in these Phase 2 dialogues, including transitional justice, the Juba Peace Agreement, and security sector reform. But the violence that we have continued to see in Darfur, Blue Nile, and elsewhere demonstrates the importance of addressing these issues in inclusive dialogues. As negotiations move forward, we underscore the importance of full respect for freedoms of association, expression, and peaceful assembly.

The impact of decades of dictatorship under Omar al Bashir will not be erased overnight. Sudan will need a holistic transitional justice strategy to address the needs of victims, rebuild trust, repair relationships among communities, and set Sudan on a path where human rights are respected.

As part of this broader strategy, we strongly urge Sudan’s authorities to comply with their international legal obligations pursuant to Resolution 1593 and move forward in cooperating with the ICC in the areas that the Prosecutor has repeatedly outlined as priorities. There are three suspects subject to ICC arrest warrants who are currently in Sudanese custody: Omar al Bashir, Ahmed Harun, and Abdel Raheem Muhammad Hussein.

Cooperation with the ICC on these cases is central to finally delivering justice in Darfur. It would be a clear signal that Sudan’s leaders are committed to the principles of justice and accountability as set forth in the Framework Political Agreement. The Sudanese authorities must continue to permit ICC teams to travel within the country. In addition, they must act on the many outstanding requests from the Prosecutor for evidence and other information and assistance, including by providing unimpeded access to key witnesses and taking steps to facilitate an enhanced ICC field presence.

Over the next few months, we will continue to stand with the Sudanese people as they work to find common ground on how transitional justice, including accountability for the violence in many decades of conflict, can advance truth, justice, reconciliation, and healing.

By United States Mission to the United Nations | 25 January, 2023 | Topics: Remarks and Highlights