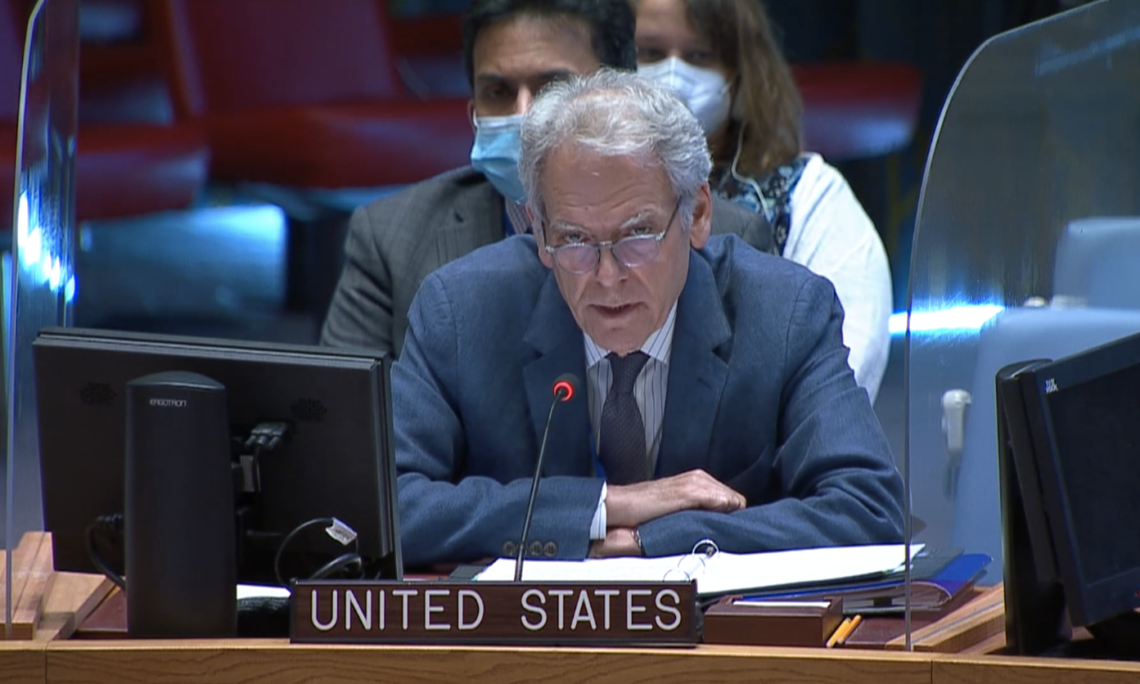 Thank you, Mr. President. SRSG Ruiz Massieu, thank you for your briefing, for your report, and for the work of you and your team. The UN Verification Mission in Colombia’s role in supporting peace and reconciliation in Colombia has been and remains essential. Vice President and Foreign Minister Marta Lucia Ramirez, as always, we welcome your presence in the Council today. Father de Roux, thank you for joining us, and for the vital work of the Truth Commission. I have to say honestly that I caught myself moved and inspired by your remarks. ‘There is a future if there is truth’ has universal application and will stay with me for a long time. And thank you Ms. Casso Piamba for your remarks and insight on your work, your experiences, and aspirations and those of your community.

The United States congratulates the people of Colombia on a free and fair elections process, and President-Elect Gustavo Petro and Vice President-Elect Francia Márquez. We welcome the incoming Petro administration’s early efforts to promote a dialogue of national unity. This is an essential step to overcome entrenched polarization and usher in a Colombia that is at peace.

We also congratulate those elected to the Congress and note that this includes 85 women, or 30 percent, as the SRSG noted in his statement – an increase of 10 percent. We commend the inclusion of 16 new representatives of rural conflict victims who will serve in “Peace Seats” in the House. They have a vital role to play to expand state presence and attention to neglected rural areas that have been a focal point of violence.

While successful democratic elections took center stage over the past three months, the Special Jurisdiction for Peace also carried out its first public hearings on acknowledgment of truth and responsibility. We are encouraged that indicted individuals voluntarily acknowledged responsibility for their actions during the conflict and apologized to their victims. We call for this process to continue in a peaceful manner as the Special Jurisdiction for Peace’s Judicial Panel of Acknowledgment of Truth and Responsibility weighs these acknowledgements against information provided by investigators and victims.

We must also note the release of the Truth Commission’s final report on June 28. The report and its recommendations symbolize the end of an important listening process and the beginning of a period of reflection on the past and future. Through the diverse voices represented in the report, we hope reconciliation becomes an enduring reality.

Much has already been achieved since the signing of the Peace Accord, and Colombia has made notable progress in becoming a more peaceful and inclusive society. However, as we all know, there are concerns that remain to be addressed, including ongoing insecurity. Forced disappearances and large-scale killings in Colombia, including of human rights and environmental defenders, are on the rise, and the security of former combatants is increasingly threatened by illegal armed groups. Indigenous and Afro-Colombian communities continue to be disproportionately victimized by illegal armed groups, an issue compounded by the absence of state presence in rural areas. To achieve rural land reform and reintegration, a safe environment must be established in long-neglected areas.

It is crucial that the UN Verification Mission be able to continue its work, and that all chapters of the Peace Accord move forward. We welcome the new administration’s commitment to the Accord’s comprehensive implementation, particularly of the Ethnic Chapter, where progress has lagged behind that of other Accord chapters. We encourage Colombia to fully meet its commitments to ethnic communities and to improve their security, rights, and opportunities.

Colombia should take pride in its recent elections and commitment to the democratic process. Although achieving a lasting peace is no easy task, we know the people of Colombia are up to the challenge.