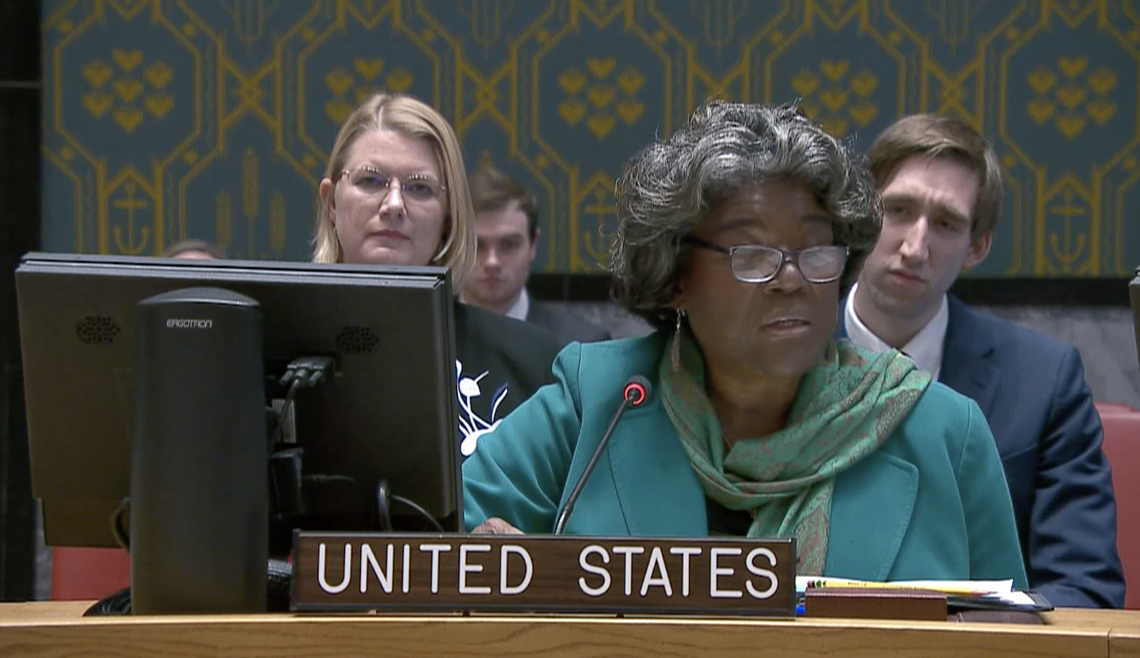 Thank you, Mr. President. I would like to thank Gabon for calling this important meeting and welcome you, Foreign Minister Adamo to chair this meeting today. I also want to thank Commissioner Bankole and Executive Director Waly, for your informative briefings and I welcome the participation of Ghana’s Minister of National Security, of India’s Minister of State for External Affairs, and United Arab Emirates’ Minister of State.

Colleagues, we all have an interest in countering the illicit trafficking of natural resources in Africa, which amounts to stealing wealth away from the people of Africa. It is in our interest to prevent traffickers from using their criminal activities and their illicit wealth to fuel conflict and terrorism. And it in our power to prevent the environmental degradation, use of child labor, displacement of populations, human rights violations and abuses, and loss of government revenue that is a byproduct of illicit trafficking.

So today, I would like to focus on three core areas we believe this Council, and the entire UN system, should focus on, to counter these activities. First, the dangers of al-Qa’ida and ISIS-linked individuals and terrorist-linked groups across Africa; second, the threats posed by the Wagner Group in this area; and third, the tools that we have at our disposal to weaken those who plunder natural resources to finance armed conflict and terrorism. And let me take these one by one.

First, in the African context, the presence of al-Qa’ida and ISIS-linked individuals and groups warrants close monitoring and action. These groups threaten Somalia, Mozambique, the Democratic Republic of the Congo, Nigeria, and the Sahel and Sinai regions and through ISIS financial facilitation networks in countries including South Africa. Money continues to be the lifeblood of terrorists. We must bolster our efforts to go after financiers and financial facilitators of terrorists and terrorist organizations. And we must stymie vital resource streams that take advantage of weak regulatory oversight.

Colleagues, secondly, one of the most immediate and growing concerns in Africa is the Kremlin-backed Wagner Group’s strategy of exploiting the natural resources of the Central African Republic, Mali, and Sudan, as well as other countries. These actions are thoroughly documented and irrefutable. And we know these ill-gotten gains are used to fund Moscow’s war machine in Africa, the Middle East, and Ukraine. And rather than being a transparent partner and improving security, Wagner exploits client States who pay for their heavy-handed security services in gold, diamonds, timber, and other natural resources — this is part of Wagner Group’s business model.

Make no mistake: people across Africa are paying a heavy price for the Wagner Group’s exploitative practices and human rights violations. Colleagues, we have the power to go after those who exploit natural resources and fund armed conflict and terrorism. And we have to wield that power effectively and with urgency.

The UN Security Council 1267 and Counterterrorism Committees, along with UNOCT and the other UN CT Compact Entities, have an essential role to play here. In the 1267 Committee, Member States must take a more proactive approach to countering al-Qa’ida and ISIS in Africa. And we applaud the 1267 Monitoring Team’s recent reports, which keep the committee apprised of the evolving terrorist trends in Africa.

The Counterterrorism Committee and CTED also play critical roles in working with Member States on a range of CT tools and best practices and in June, CTED published a trend alert on this very topic. And CTED’s Member State assessments provide crucial information that can strengthen whole-of-society and whole-of-government approaches to prevent and counter terrorism financing.

Sanctions are also integral to combatting the trafficking of natural resources. The sanctions regimes of CAR, DPRK, DRC, Libya, Somalia, and South Sudan have specific sanctions designation criteria concerning the illicit trafficking of natural resources. And from a counterterrorism perspective, the 1267 ISIL and al-Qaida sanctions regime is an effective Security Council tool to stop the flow of resources through the designation of specific ISIS and al-Qa’ida branches, members, and their support entities.

Finally, I want to make clear that all counterterrorism efforts must respect the rule of law and human rights. Failing to comply with these international obligations only contributes to increased radicalization to violence. Again, I want to thank my colleagues from Gabon for raising this vital issue at the start of their presidency. And I look forward to us working together in the days, months, and years ahead to cut off the funding that drives conflict and stamp out the illicit trafficking of natural resources. Thank you, Mr. President.