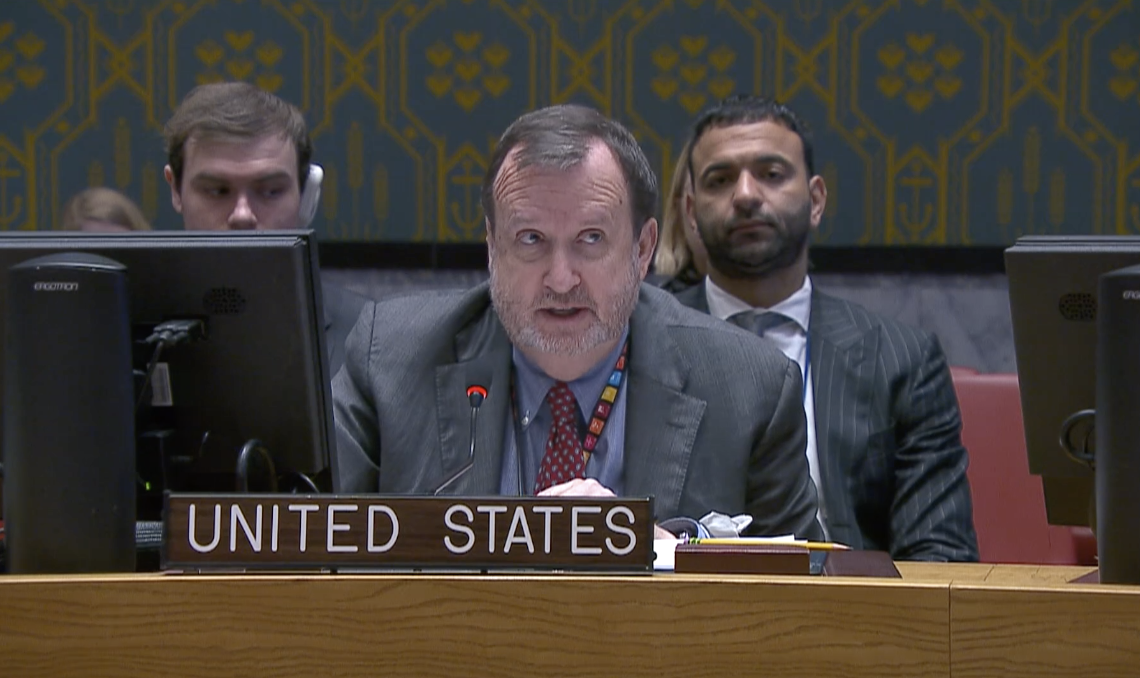 Thank you very much, Mr. President. And thank you, Special Representative Hennis-Plasschaert, for your frank and useful briefing and for your leadership of UNAMI, which continues to play such an important and respected role in Iraq.

I must start by strongly condemning the IRGC missile and drone attacks in the Iraqi Kurdistan Region on September 28. Iran fired at least 48 ballistic missiles – a major escalation of Iranian violations of Iraqi sovereignty. Iran’s flagrant violation of Iraq’s sovereignty and territorial integrity must stop. Such a brazen attack on a neighbor’s territory, especially one that results in the deaths of innocent civilians, is morally reprehensible.

We remain concerned about the prospects for renewed violence and welcome the efforts of Iraqi Security Forces personnel to prevent escalation and protect the right to peaceful protest. The only legitimate way to achieve reform and form a government responsive to the needs of the Iraqi people is through constructive and inclusive dialogue, not violence.

Today’s briefing comes as we have heard, nearly one year after Iraq held parliamentary elections. Despite the fact that the elections were credible, peaceful, and well-managed, the elected parliamentarians and their party leaders have failed to form a government that serves the people of Iraq.

This extended period of political maneuvering has delayed the critical work of the government to the detriment of Iraq and its people and increased tensions that have, in some cases, as we have heard, devolved into violence.

Complicated challenges face the next government – including passing a budget, developing oil and gas legislation that is acceptable to the Government of Iraq and the Kurdistan Regional Government, improving the provision of electricity, combatting climate change, promoting private sector development and job growth, and increasing women’s participation in the workforce.

This month also marks three years since the Tishreen protests and the brutal repression of protesters by Iran-affiliated militias intent on silencing the legitimate demands of the Iraqi people. We call on the Iraqi government, to hold accountable those individuals and groups responsible for the abuse of protesters, which left hundreds dead, and thousands wounded.

We welcome news of progress on the repatriation of Iraqis from the al-Hol camp and encourage continued cooperation between the government, UNAMI, and other humanitarian actors to provide Iraqi families and orphans essential legal documents and to rehabilitate and reintegrate them into their communities safely, voluntarily, and with dignity in accordance with their wishes.

We call on the government of Iraq to continue its efforts to create conditions that will allow displaced persons to return to their homes and facilitate durable solutions. It is also important that the Government of Iraq and the Kurdistan Regional Government implement the Sinjar Agreement and address urgent reconstruction and livelihood needs in the Yezidi homeland, where some of Iraq’s most vulnerable communities languish without adequate security, infrastructure, education, psychosocial support, and livelihoods.

We listened with interest to Prime Minister Kadhimi’s address to the General Assembly. His description of the environmental degradation facing Iraq was particularly concerning. We support UNAMI’s efforts to assist Iraq as it works to mitigate this environmental crisis and adapt to climate change, including through sustainable development, water management, and the use of renewable energy. We encourage Iraq’s neighbors and partners to assist as appropriate.

In conclusion Mr. President, my delegation congratulates Iraq on the occasion of its National Day on October 3, commending the resilience of the Iraqi people as they overcome existential challenges and look toward a more peaceful and prosperous future. We call on all States to support Iraq and respect its sovereignty and territorial integrity. Thank you, Mr. President.