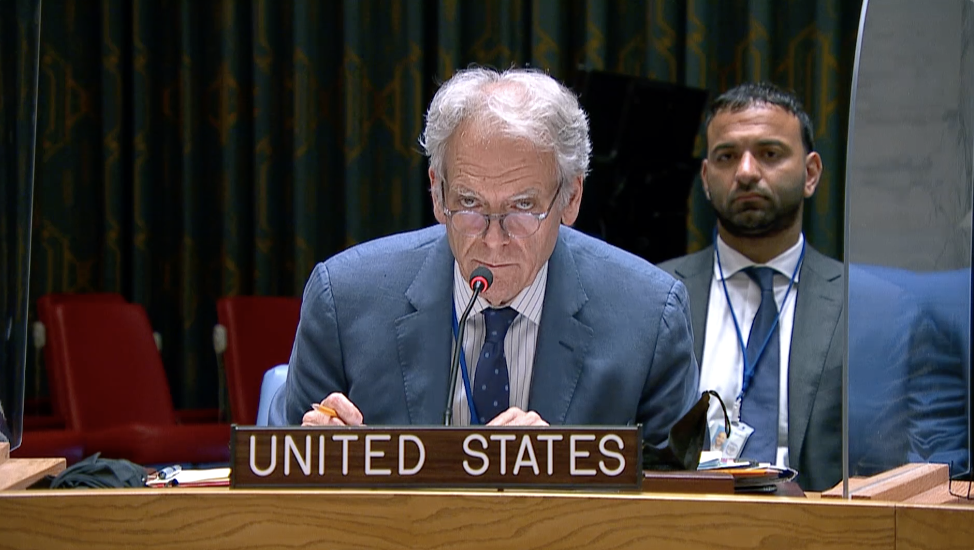 Thank you, Mr. President, and thank you Assistant Secretary-General Pobee for your briefing.

We welcome reports of considerable progress made in Cairo and Geneva by delegations from the House of Representatives and High Council of State toward an agreement on a constitutional framework for elections, and we credit Special Adviser Stephanie Williams for her role in facilitating that progress.

It is unfortunate that House of Representatives Speaker Agila Saleh and President of the High State Council Khaled al-Mishri were unable to come to agreement on the eligibility requirements for candidates in the presidential elections. We urge them to maintain dialogue and redouble their efforts to reach agreement on outstanding matters. These issues are the same as those that derailed elections in December.

It is past time for Libya’s leaders to set aside personal interests and implement a plan that ends with free and fair elections, in line with the roadmap established by the Libyan Political Dialogue Forum. Delays do a disservice to the Libyan people, who are demanding their rightful opportunity to choose leaders who will deliver transparent governance. Delays are also dangerous, creating opportunities for political maneuvering and miscalculations that can increase tension and lead to violence.

The turmoil surrounding Libya’s oil sector is an example. The use of hydrocarbon revenue to buy support from militias and foreign mercenaries increases the armed presence in cities and is destabilizing. The politically motivated shutdown of Libya’s oil production robbed the Libyan people of revenues from their natural resources. The prospect of resuming oil production will be welcomed by Libyans and the international community. But the international community must ensure production does in fact resume, and when it does, we must ensure that the integrity of the Libyan National Oil Corporation as an apolitical institution is maintained and that revenues are managed in a transparent and accountable manner.

These developments take place concurrently with a disappointing step back in reunification of the Central Bank of Libya. While we applauded the recent initiative of the Central Bank to release more detailed monthly statements, which should reduce suspicion among leadership factions and build public trust in the Bank, we are concerned that steps toward reunification have stalled amid reports the eastern-based branch is seeking to print currency abroad.

Also deeply disturbing are shows of force by militias and the attendant sporadic violence, all in service of political maneuvering. We urge all sides to refrain from unilateral actions that will lead to violence.

We welcome the Human Rights Council’s extension of the mandate of the independent Fact-Finding Mission on Libya, an important step in continuing to document human rights violations and abuses in support of transitional justice and a more durable resolution to the conflict.

The most effective mechanism to reduce the risk of widespread violence is the demobilization of militias and the immediate withdrawal of all foreign forces, fighters, and mercenaries. This includes Russia’s Wagner Group, which operates both in Libya and across Africa, which they access from their bases in eastern and southern Libya.

The UN role in supporting Libya through its political, economic, and security challenges is critical. It is now time for this Council to provide UNSMIL with a clear and comprehensive one-year mandate so the Mission can work confidently to address the many issues facing Libya. We call on all members to engage constructively in negotiations toward a comprehensive mandate and vote to adopt a resolution that reflects the views of the vast majority of this Council. Council members are engaged with the Secretary-General as he works to nominate a candidate for Special Representative.

Refusing to allow a substantive 12-month mandate until the SRSG is in place will only result in hobbling UNSMIL at a critical moment when effective leadership could be instrumental in sealing an agreement to hold elections. If we allow this to happen, we would allow Council members to hold a mandate renewal hostage as a means of achieving political aims, a dangerous precedent that we have seen play out on other files in recent weeks.

We ask that all Council members adopt a more constructive approach that empowers UNSMIL with the resources and political guidance needed to succeed. Thank you.