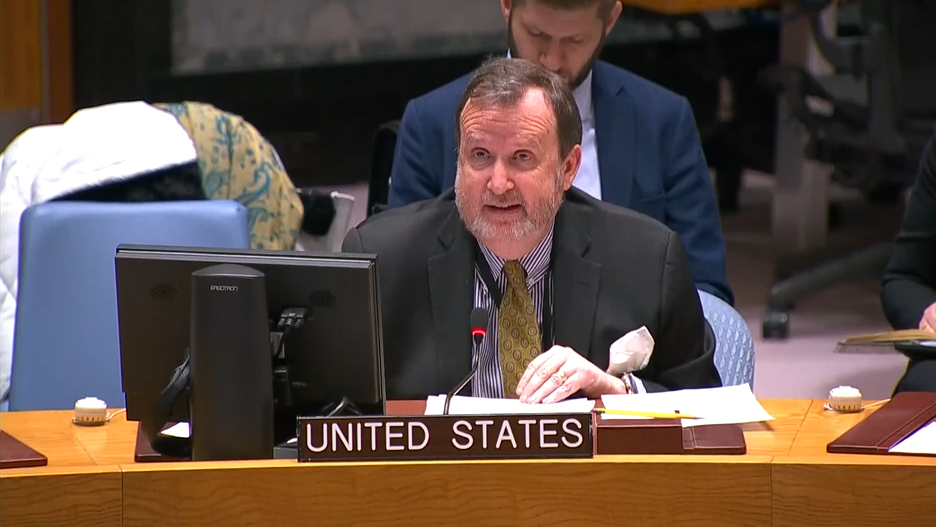 Thank you, Mr. President. Thank you, Special Envoy Pedersen and Ms. Mudawi, for your briefings.

The unanimous adoption of Resolution 2672 confirming the continued authorization of the cross-border humanitarian assistance delivery mechanism was, as we just heard from Ms. Mudawi, a necessary step to aid the Syrian people and reduce suffering.

Now, we join Ms. Mudawi in calling on states to contribute generously to the UN’s Syria Humanitarian Response Plan so that humanitarian actors can continue to provide lifesaving food, water, medicine, shelter, and early recovery programs, among other aid, across all of Syria. We similarly urge donors to increase support for Syrian refugees and their host communities, and we particularly thank Türkiye, Lebanon, Jordan, Iraq, and Egypt for continuing to welcome these Syrians in need.

We encourage the UN to continue strengthening its oversight of and due diligence with respect to procurement in Syria, even as it expands cross-line aid deliveries. Given the alarming record of human rights violations and abuses in Syria and the well-documented cases of corruption, vigilance is important.

We remain deeply concerned by the dire need for assistance in Rukban and we call on the Assad regime, which has at times outright refused to approve cross-line deliveries, to allow UN agencies and the Red Crescent to help the people who are suffering there. The fact that no aid has reached Rukban from Damascus since 2019 is unconscionable, and it puts the lie to regime rhetoric that cross-line aid can be relied upon. The United States supports cross-line aid to all areas of Syria, including the northwest, the northeast, and Rukban.

Several Council members that profess support for cross-line aid refuse to acknowledge that the primary impediment to increased cross-line deliveries is the insecurity created by the Assad regime’s relentless conflict.

In that context, we call on the Assad regime to cease its assault on the Syrian people. It is imperative that all sides agree to a comprehensive, nationwide ceasefire. We are eager to see results from the renewed meetings of the Ceasefire Task Force in Geneva.

We are also eager to see the resumption of Constitutional Committee meetings in Geneva, provided Russia abandons its arbitrary demands on unrelated issues. It is incumbent upon the Assad regime to stop stalling and to cooperate with Special Envoy Pedersen’s efforts to convene good-faith discussions towards a political solution to the conflict in line with UN Security Council Resolution 2254. This resolution remains the only viable solution to the conflict, and we encourage all parties to engage fully under this framework and to coordinate all efforts through the UN Special Envoy.

After 12 years of brutal war on the Syrian people, we have yet to see the Assad regime take any meaningful steps towards a political solution. In fact, we continue to hear the regime casting blame on others for the war it started and has maintained. We will hear more of this today, I’m sure, in the chamber.

Given this obstinance, the United States opposes any measure of normalization with the Assad regime. States contemplating reproachment should carefully consider what the Assad regime has done to earn such an opportunity. The regime in fact continues to behave as it long has – behavior that rightly caused the international community to recoil in horror and reject any dealings with Assad.

Mr. President, we share the concerns raised by many about the situation at displacement camps and detention facilities in northeast Syria. We call on states to repatriate their nationals from northeast Syria, reintegrate them, and where appropriate prosecute them for atrocities they may have committed. The continued presence of thousands of third-country nationals further complicates the humanitarian, the human rights, and security situation in Syria and it must be addressed.

The Assad regime can begin to demonstrate its commitment to good faith discussions by confirming the fates and whereabouts of the 132,000 missing or arbitrarily detained persons. While we acknowledge that last year’s so-called amnesty decree appears to have resulted in the release of around 500 people, we call on the regime to release everyone that it has arbitrarily detained.

Furthermore, we call on the Assad regime to conduct all detainee releases in an organized and humane manner, including by releasing the lists of individuals and the locations where they will be released, and providing proper services to support detainees during their transition from detention. For all of those who remain in detention, the regime should inform family members of their condition, their location, the reason for detention, and conduct fair and transparent trials for those accused of crimes. The regime should allow immediate, unhindered access to third-party prison monitors and medical services for all detainees.