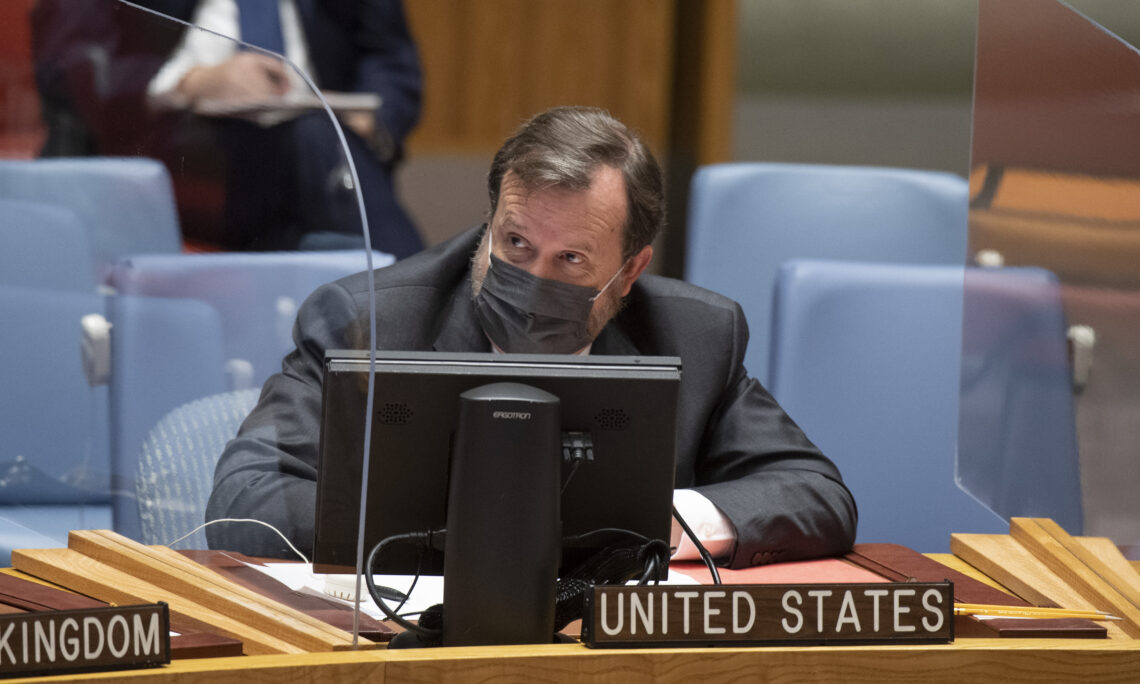 Thank you, Madam President, for that warm welcome, and I am pleased to be here with my colleagues today. I’m very pleased, as the new Deputy Permanent Representative at the U.S. Mission, that my first appearance in the Council is on this very important topic, the situation along the Sudan and South Sudan Border. Let me thank you, Under-Secretary Lacroix, Special Envoy Parfait, for your briefings and for all of your efforts to date.

Madam President, in recent years, we have seen a dramatic improvement in relations between South Sudan and Sudan, as we have just heard. The signing of the Juba Peace Agreement on October 3 was a significant milestone and, if it is implemented, can help stabilize not only Sudan, but we believe the entire region. The United States commends South Sudan for its role in mediating the negotiations that led to the agreement.

Now Sudan and South Sudan should maintain this positive momentum and now turn their attention to resolving the political status of Abyei and agreeing to security and administrative arrangements that can be implemented in the near future.

Security in Abyei remains fragile. We have previously stated in this Council that the people of Abyei deserve better, and that still remains true today.

As the most remote peacekeeping mission in the world, we commend UNISFA for supporting stability and security in Abyei and along the border between Sudan and South Sudan. We also want to recognize Ethiopia’s leadership role in supporting UNISFA.

The United States calls for Sudan and South Sudan to lift restrictions that negatively impact UNISFA’s ability to carry out its mandate. Denying visas for UN police and a civilian deputy for the mission, blocking access to Athony airfield for UNISFA, and refusing to provide national police to join Abyei’s Joint Police Service is just counterproductive. We very much regret the limited progress on these issues and we expect additional steps to be undertaken by the parties in the coming weeks.

The Secretary-General just reported to us that out of a total of 640 mandated UN police officers for UNISFA, only 35 officers are present due to delays by Sudan in granting visas. The lack of police is causing community policing sites to close. Denying access to Athony airfield also poses a risk to peacekeepers, it hinders Medevac and casualty evacuation capabilities.

These restrictions together are undermining stability in Abyei and they’re endangering both civilians and peacekeepers.

Madam President, we look forward to working together with our fellow delegations to renew UNISFA’s mandate. While UNISFA’s presence should continue, given the warming relations between Sudan and South Sudan, we do believe now is the time to consider a future in Abyei that does not require an international peacekeeping operation – either because there is a final resolution or because the parties themselves develop joint security and administration mechanisms on their own.

A transition from UNISFA will need to prioritize the safety and the security of civilians and support communities to achieve a more peaceful co-existence. The concerns of women must be at the forefront of these efforts. South Sudan and Sudan should look to build on UNISFA’s leadership in promoting women’s participation in decision-making processes, which as many of us know recently led to community leaders nominating women for positions in the local administration. These are important steps to build a durable peace in the region.

UNISFA was created as an interim force. Almost 10 years later, this Council, Sudan, South Sudan, Ethiopia, the UN, and the African Union should all re-evaluate how Abyei’s status can be resolved and how security can be provided. UNISFA’s indefinite continuation, especially while Sudan and South Sudan place restrictions on its operations and its staffing, is – in my delegation’s view – untenable.

In the near term, the AU and UN should strengthen their support to develop administrative and security arrangements for Abyei. They also should encourage the parties to support local communities to engage in meaningful dialogue. Regular meetings of the Joint Political and Security Mechanism should inform this process.

In concluding, Madam President, let me state the United States will continue to support stability in Sudan, South Sudan and the greater Horn of Africa. I was pleased to hear Special Envoy Parfait mention President Trump’s recently announced decision to remove Sudan from the U.S. State Sponsors of Terrorism list. We agree, this is a tremendous step forward for Sudan and a recognition of the clear progress that has been made on the ground. We hope progress in the region continues, and the parties come together to provide the people of Abyei the opportunity to live free from violence.