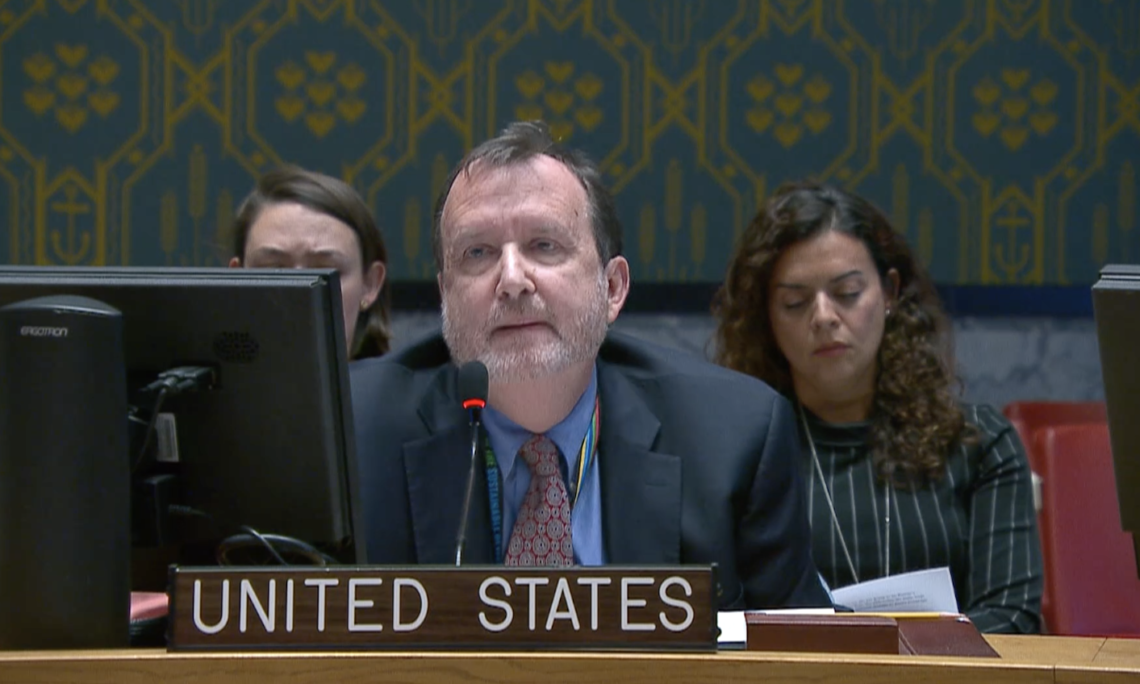 Merci, Monsieur le Président. And thank you to Assistant Secretary-General Hanif and our other briefers today.

I’ll be a little longer than I intended given that, once again, our Russian colleagues have decided to instrumentalize the Security Council meeting to spread conspiracy theories and disinformation, to quote my colleague, “morbid fantasies.”

But let me begin by saying clearly and unequivocally we’re deeply concerned by the apparent sabotage that took place on the Nord Stream 1 and the Nord Stream 2 pipelines. As we just heard from the United Kingdom, deliberate actions to damage critical infrastructure can’t be tolerated.

Efforts to investigate are under way, and the United States strongly supports European efforts to conduct this important investigation. It can take time, but the search for the truth will not be rushed. It’s important that we first established the facts.

Now I know our Russian colleagues have had a bad afternoon. Actually, a bad day. They had to sit and watch that strangely odd, fascist, Nuremberg-style rally combined with Las Vegas 1970s show that happened in Moscow this morning to celebrate the illegal annexation of Ukrainian territory. And that afternoon they got hit by the Council’s vote clearly sending the message about their annexation of Ukrainian territory.

But I don’t think that justifies, once again, the Russian delegation raising conspiracy theories and mass disinformation in this Council. My Russian colleague continues to use inflammatory rhetoric that is accusing the United States of being involved in this act of sabotage.

Let me answer his question. Let me be clear: the United States categorically denies any involvement in this incident. And we reject any assertions saying the contrary.

Let me also talk about energy supplies since that was raised, and the relationship between the United States and our European friends and partners in the energy sector. It’s been clear for years that Russia is not a reliable energy supplier. So yes, the United States has been working with our European partners and our allies to increase their energy resilience and provide alternative supplies. We are working on a short-term basis and a long-term basis to address energy security and the stability of global energy markets, not only for Europe, but for the world.

I’ll end there because while we get to the bottom of what happened on Nord Stream, we’re not going to let Russia’s disinformation apparatus distract us from addressing the main issue at hand which is the continuing aggression against Ukraine, and the destruction of civilian infrastructure on Ukrainian sovereign territory.

It’s important that we use this meeting not to foster conspiracy theories, but to focus our attention on Russia’s blatant violation of the Charter and its crimes in Ukraine. In only half a year, Ukraine has become the scene of some of the worst mass-scale violence, including destruction of infrastructure, that Europe has witnessed in decades. Of deep concern to us all is the conclusion last week by the UN commission of inquiry that Russia committed war crimes in Ukraine, including deliberate destruction of infrastructure.

Sabotage of critical infrastructure should be of concern to us all. In the context of Russia’s aggression against Ukraine, we have seen numerous Russian attacks damaging civilian infrastructure. We witnessed Russia recklessly seize control of Europe’s largest nuclear power plant, risking a nuclear disaster in Europe. We saw countless attacks destroying civilian electricity infrastructure.

Russia attacked energy and water infrastructure in Kharkiv, Zmiiv, and Pavlograd on September 11th and 12th that caused mass blackouts and water cut-offs. On September 14th, there were reports of Russia striking a dam at the Karachuniv reservoir, causing fear of flooding.

We’ve also heard in this very chamber UN experts recount numerous verified instances of harm to civilians and civilian infrastructure resulting from Russia’s war against Ukraine. These reports include credible reporting of the bombing of educational institutions, medical clinics, hospitals, killing of aid workers, medical staff and patients. Evidence of the scale of atrocities continues to mount as Russia ignores international calls for an immediate stopped in this war.

Despite efforts that we heard today to distract us from the truth, to distribute more disinformation and slightly wacky theories, the facts on the ground in Ukraine speak for themselves. Russian attacks in Ukraine have hit civilians and they’ve reduced cities to rubble, resulting in thousands dead and injured.

As we did with this afternoon’s vote, we must continue to speak out against Russia’s atrocities, this war, and the wanton disregard for international law that we are seeing on the ground. We must not allow Russia to continue to use this platform, this Council, to spread lies and disinformation which they have done since the very beginning of this war in Ukraine. I’m sure all of us recall how the days before the war began. The Russian delegation was tweeting out that there was no intention to invade Ukraine.