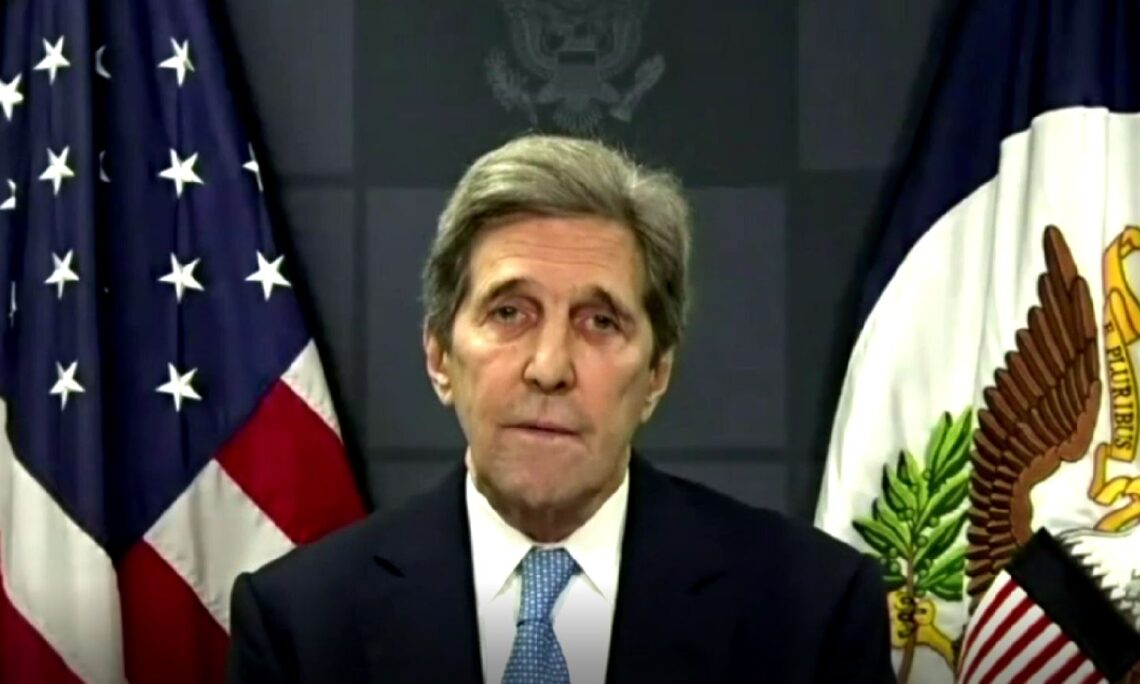 Mr. President, thank you very much. Foreign Secretary Rabb, great to see you. Thank you to Prime Minister Johnson for convening this essential discussion and of course for your leadership and partnership as we all prepare for COP26. Also want to thank Secretary General Antonio Guterres for sounding the alarm on the climate crisis every chance that he gets. Monsieur President Macron and Prime Minister Solberg, thank you for the incredible leadership of Europe during what can only be deemed by many of us as an inexcusable absence by our country from this debate. We are grateful to Europe for stepping up.

I am really pleased to have the privilege of speaking before the Security Council today and I thank all of my colleagues, those who have contributed, and my counterpart in India Minister Javadekar, thank you of your important reminder of the larger issues that are at stake here.

I think it’s particularly important we are before the Security Council because the climate crisis is indisputably a Security Council issue. Our Pentagon has for years described the impact of climate as a threat multiplier. In fact, it is among the most complex and compelling security issues that I think we have ever faced. We’re told repeatedly that it is an existential threat and yet despite impacts that can exacerbate existing political, social, and economic tensions, we honestly have yet as a world to respond with the urgency required.

When farmers, and others have mentioned this, can no longer make a living because the weather is so extreme and unpredictable, they become increasingly desperate. When people already impoverished lose water and heat drives them from their homes as it is, the embers of conflict burn brighter and faster. Studies warn us that hundreds of millions of people could be uprooted. Not only can mass migration drive humanitarian crisis, but we also know that if it’s not managed well, it undermines peace and stability.

So it is vital to discuss this issue here in the UN Security Council, because when we talk about the climate crisis, we are talking about our security – every nation, every citizen – economic security, food security, energy security, and yes, even physical security.

The sad reality is that if you look at a map of the most fragile states in the world and you overlay that with the map of those most vulnerable to devasting climate impacts, you can see exactly how much overlap there is. Many of the regions where we’re focused on peacebuilding and conflict prevention, are projected to be the literal hotspots in the coming crisis. And we know, as

Ms. Elsaim powerfully described, the conflict and the climate crisis are linked in places like Sudan and so many others. We simply cannot ignore how climate is affecting these regions. On the contrary, climate impacts need to be reflected in every aspect of this body’s decision-making and field reporting.

The good news is that even as we work to build resilience around the world and adapt to the climate consequences that are already inevitable, it is still possible to stave off the very worst impacts of the crisis. President Biden knows that we don’t have a moment to waste, which is why he moved to rejoin the Paris Agreement just hours after being sworn into office. And it is why he directed a coordinated, whole-of-government approach to address the climate crisis, to elevate the issue as a national security priority, and to put America on an irreversible path to achieve net-zero emissions by 2050 or earlier. And I emphasize irreversible by any president, by any demagogue of the future.

But no one country can solve the climate crisis on its own; it is exactly the kind of challenge the United Nations was created to address. We will all have to work together, just as we did in Paris, to set bold and achievable targets and clear roadmaps for how we will reach them. It’s not enough to have some outlying, thirty years from now target and pretend we have done our job. Every country will have to step up and raise ambition. And the fact is that the seventeen major emitters of the world, their responsibility to the rest of the world to reduce their emissions, and that begins by reducing the use of coal on a global basis.

Nothing less than bold action in this decade can set the entire world on the path that we have confidence will get to net-zero emissions by 2050 – or earlier. And that is the only way that science tells we can keep alive the possibility of limiting this planet’s warming to 1.5 degrees Celsius.

Why is that so critical? Because overwhelming evidence tells us that anything more will have catastrophic implications around the globe. And for those that argue that climate action is just too expensive, study after study confirms that now at this this moment in our history, inaction comes with a far higher price tag than action.

Unlike most security threats, addressing the climate crisis actually presents the greatest economic opportunity in modern history. Not since the Industrial Revolution has there been such potential to build back better – in every corner of the world. And sadly, not doing so will leave us in a position where we are – just by inadvertence, by lack of will, by lack of coming together – marching forward in what is almost tantamount to a mutual suicide pact.

The Leaders’ Summit that President Biden will host on Earth Day will be a critical moment to advance our shared goals. And we are planning of taking advantage of every opportunity we have in the coming months to work all of us, together, in addressing the many facets of this crisis. And in November, we will join with the rest of the world to convene in Glasgow for the UN Climate Conference, COP26. I am convinced it is literally our last, best hope to get on track and to get this right.

In the meantime, here in the United Nations Security Council, the United States will work closely with our like-minded colleagues to focus the Security Council’s attentions on the climate crisis and its consequences on international peace and security. In that vein, we congratulate Ireland in assuming the co-chairmanship with Niger of the Informal Expert Group on Climate and Security. We are eager to engage with the IEG and advance its goals.

My friends, given the journey that many of us have been on since Rio in 1992, we are now compelled to do more than talk about climate-related security risks. We have to work together to understand them before they wreak havoc, we have to develop stronger early-warning systems, we have to mainstream the climate crisis into every aspect of our public and private sector and decision-making. And in the face of climate-fueled challenges, we have to make certain that cooperation, not conflict, is the response of first resort.

Some argue that climate change isn’t the business of the UN Security Council. Well, we could only wish that was true, but the fact is the climate threat is so massive, so multi-faceted, that it’s impossible to disentangle it from other challenges that the Security Council faces. We bury our heads in the sand at our own peril. It is time to start treating the climate crisis like the urgent security threat that it is. This is literally the challenge of all of our generations. Thank you.