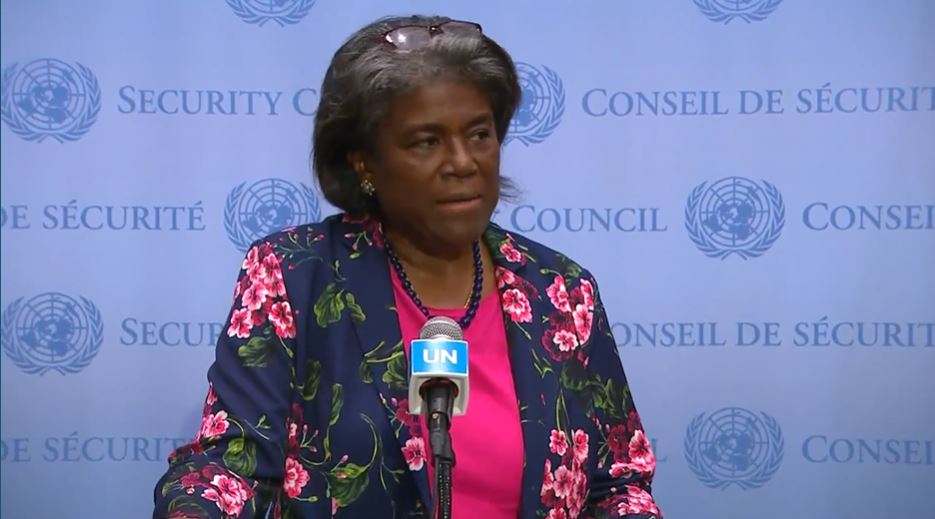 I’m just going to do a brief statement then I’ll take a couple of questions. Thank you, all, for staying.

Today, Russia chose to close hospitals and schools in Syria. Russia chose to deny nutrition assistance to 85,000 Syrians, and dignity kits for 250,000 women and girls. They chose to stop shipments of lifesaving therapeutics that could stem the tide of hunger sweeping across Syria. This was a life-or-death vote for the Syrian people and Russia chose the latter.

The penholder’s resolution was a compromise. This was already the bare minimum the Syrian people needed to survive and reflected close consultations with all Council members. Being a leader at the UN means seriously contributing to the world’s most pressing crises – including urgent humanitarian and food insecurity crises – both in funding and in diplomatic support. Today, Russia chose to do neither.

For our part, the United States will continue to put these needs first. When I visited the region, I looked into the eyes of aid workers and refugees, and I saw desperation. And I will not stop until we have done everything – everything – we can to get them the aid they need.

We said from the beginning of this process that we needed to be responsive to the needs of the Syrian people. A six-month extension, as proposed by the Russians, could leave Syrians without blankets in the dead of winter, without the supplies that they need. It would deny the UN and humanitarian organizations the time to organize the reliable supply of humanitarian aid for all the Syrians who are beneficiaries of cross-border deliveries. And, frankly, Russia’s approach to these negotiations was unprofessional, it was greedy, they hijacked the penholders – and desperate Syrians will pay the price.

As I told the Council just now, we could not support Russia’s insufficient resolution. It simply did not meet the moment in any way, shape, or form. And it provided support only to the Syrian regime.

Despite this, 14 members of the Council sent an important signal today and stood united behind reauthorizing the lifesaving humanitarian aid for another year in Syria. Fortunately, there are still two days – two days left before the mandate expires. And this Council has two days to reverse course and put the needs of the Syrian people first.

QUESTION: The Deputy Russian Ambassador stood at this podium and said he will block anything other than another member putting forward his exact resolution again – the exact wording again. Now that would be very humiliating for you, but it would be better than nothing, wouldn’t it?

AMBASSADOR THOMAS-GREENFIELD: His resolution was nothing. We got 99 percent of the way there with the Russians. We gave them 99 percent. They admitted they got 99 percent. And they were holding out for one percent to continue to give support to the Syrian regime.

We’ve asked the penholders to go back into the negotiating room and work to negotiate a settlement moving forward so that we can continue assistance to the Syrian people.

QUESTION: Ambassador, last year, President Biden spoke to President Putin to get this resolution over the line. Is there any consideration of any kind of high-level discussions between Russia and the United States?

AMBASSADOR THOMAS-GREENFIELD: We’ve not had any such discussions and at the moment we don’t plan any.

QUESTION: If after Sunday, the Security Council continues to fail in reaching an agreement due to this intransigence, what is your message to the Syrian people – the 2.4 million people – who are depending on the food, the medicine, their livelihoods, the cross-border aid?

AMBASSADOR THOMAS-GREENFIELD: I’m sorry. And we will keep working. We will keep working. We know that the NGOs, when I was out there last month, they told me they had prepositioned about three months of supplies. I hope since that time they were able to preposition more supplies. We will continue to work with the humanitarian community to find ways to continue to provide humanitarian assistance directly to the Syrian people.

And let me be clear: The border is not closing. It is the mechanism that is closing. So, again, we will continue to look for ways to get assistance in. We just won’t have this extraordinarily efficient UN-supported mechanism that we have been using in the past.

AMBASSADOR THOMAS-GREENFIELD: I can’t project that, but Russia will have to go before the General Assembly and explain why it felt it needed to use its veto.

QUESTION: Ambassador, the Deputy Russian Ambassador was arguing that Russia doesn’t feel internationally isolated. What do you say to that?