Home Home | Search Results | Remarks by Amb. Thomas-Greenfield at a UN General Assembly Commemorative Meeting on the International Day for the Elimination of Racial Discrimination 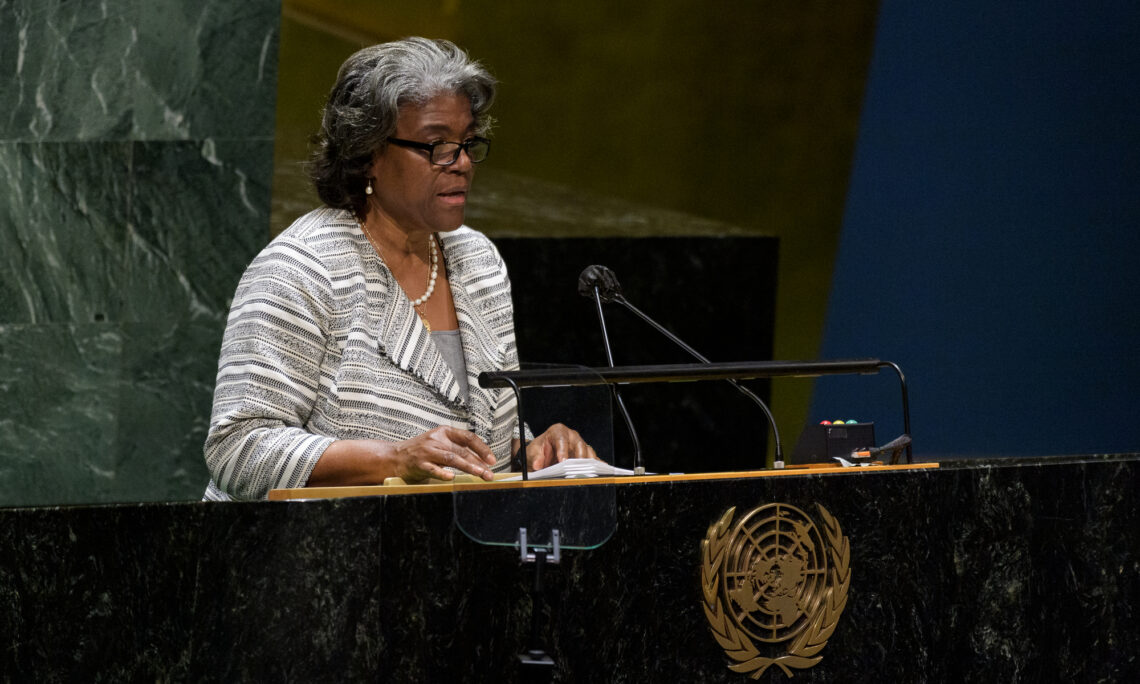 Thank you, Mr. President, for convening us here to mark this important day for the international elimination of racial discrimination. I also thank the Secretary-General for joining us today in this important meeting.

Ladies and gentlemen, I just left the Security Council where I learned of the passing of our colleague, Jim Kelly, our Irish colleague. We held him in such high esteem, and we will miss him in our midst. And I send my sincere condolences to the Irish Mission.

Mr. President, last year, I told the General Assembly about my own personal experiences with racism. And I spoke about the Atlanta spa shootings that had just happened, where six Asian women were killed. We are now marking the one-year anniversary of that tragic event – and still, anti-Asian racism and racism of all kinds continue to rise. Just this week, 30 minutes north of here, Yonkers police officials say a man hit a woman in the head 125 times because she was Asian. He’s being charged with attempted murder. This anti-Asian bias has been growing all over the world since the pandemic, and it must stop.

We have seen a similarly horrific rise in hate crimes against Black and brown people in the United States. Antisemitism is also on the rise – more than one third of American Jews say that they have been verbally or physically assaulted over the past five years simply because they are Jewish. In Europe, 90 percent of Jews feel that antisemitism has increased in their country. More than one in three have considered emigrating to escape that concern.

The sad truth is that racism begets more racism. We must stop this trend in its tracks.

Youth activists and movements on the ground are on the frontlines of this effort and are confronting the mounting menace of racism in countries around the globe. In the summer of 2020, Black Lives Matter ignited protests and catalyzed change in countries around the world, from the United Kingdom to Colombia, France to New Zealand.

In Nigeria, a similarly decentralized social movement, End SARS, has been calling for accountability of abuses and respect for Black lives. End SARS and Black Lives Matter activists have been working together, supporting each other, and driving us toward change.

There’s the quilombo movement in Brazil, where Black Brazilians are creating spaces to celebrate their identity.

There are the aboriginals pushing for justice in Australia, the Dalit farmers seeking to shed the yolk of the caste system in India.

And we cannot forget the plight of Rohingya in Burma or Uyghurs in China, and members of other racial and ethnic groups, who are brutally oppressed simply because of who they are or what they believe.

What the members of all these global movements and so many others for racial justice understand is that our differences – our differences – are our source of strength. As President Biden said, “Our country’s greatest strength is and always has been our diversity.” That’s why President Biden has made advancing racial equality and combating systemic racism a core priority of his administration, signing four – four – executive actions as soon as he took office. And it is why, this past year, he directed historic investments toward Black and brown communities – including the funds and resources Vice President Harris announced this week for Historically Black Colleges and Universities that recently experienced bomb threats.

The powerful notion that diversity is a strength holds true for communities and countries everywhere. Growing up, I faced adversity. But that ultimately made me stronger. And as I made my way through life, I found I could flex my “adversity muscles” – I remembered how I dealt with adversity in the past, and it helped me move forward stronger and more determined. It is time for the world to flex its “adversity muscles” too.

Racism is a global problem and a local problem, but that also means that we can be united, together, in our fight against it. We have allies in this fight everywhere in the world. And that is the power – that is the power – of our international system. That is where the United Nations comes into play. The United Nations, as Ralph Bunche said in his Nobel Peace Prize speech, “exists not merely to preserve the peace but also to make change – even radical change – possible without violent upheaval.”

That is why the United States strongly supported the establishment of the Permanent Forum on the People of African Descent. It is why we strongly supported the International Independent Expert Mechanism to Advance Racial Justice and Equality in Law Enforcement. And it is why we must support real and radical change within the United Nations to eliminate racism and discrimination in all of its forms.

The United Nations is uniquely poised to galvanize change. This should be the place where we expose the racial discrimination endemic to our societies and to the world. This should be the venue where we recognize our shared humanity and work to remove the rot of racism from our foundations. And today, right now, right here, is the time to harness the energy, the optimism, and activism of the next generation, and to do everything – everything – in our power to leave them with a less hateful, more hopeful world.

Thank you very much. Thank you, Mr. President.