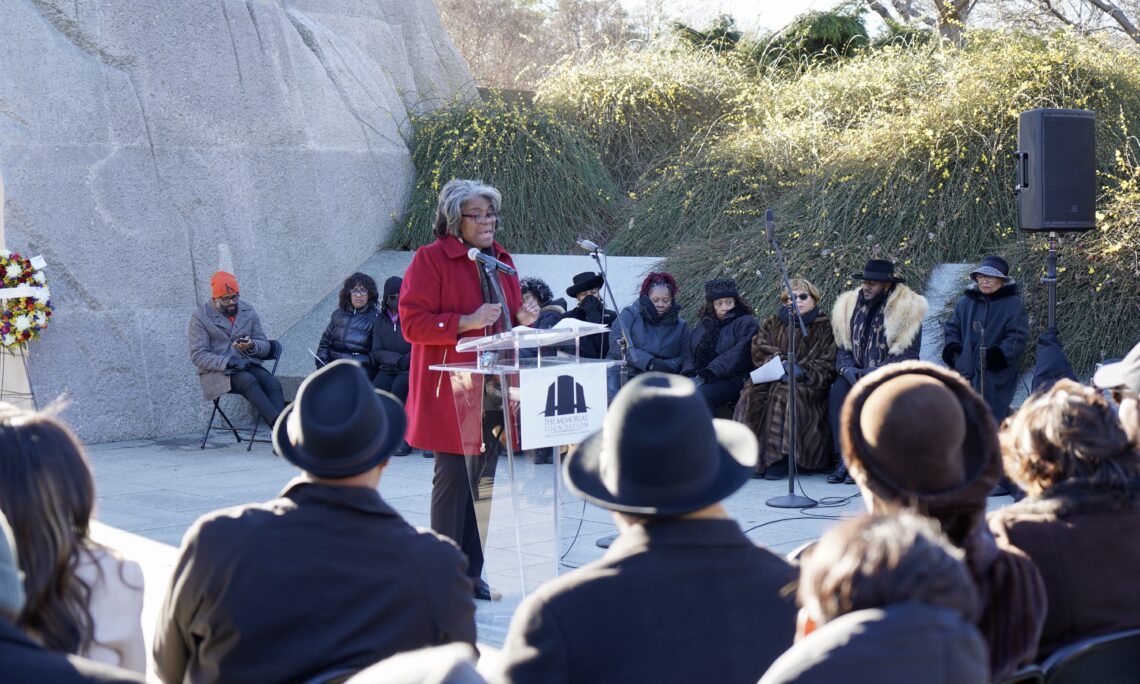 Thank you Dez for that great introduction. And let me thank you, Harry – thank you for inviting me here and thank you and the Foundation for everything that you have done to carry Dr. King’s legacy forward and again for bringing all of us here today in the spirit of reconciliation and service.

We stand in the shadow of a man who believed that a stone of hope could emerge from a mountain of despair.

We stand in the shadow of a man who helped inspire a generation to take up the cause of civil rights – to bind together in non-violent activism, to march on this very city.

I was 11 years old when Dr. King stood in the symbolic shadow of another great American, at the Lincoln Memorial, and delivered the “I Have a Dream” speech. Those four words – “I Have a Dream” – are perhaps King’s most enduring. They are etched into America’s collective memory. And they continue to ring in the ears of today’s civil rights leaders.

But I’ll be honest: as a young girl, Dr. King’s dream was unimaginable to me. I didn’t know what it meant to dream that big. I didn’t know what life looked like outside my small, segregated town in Louisiana where the Klan regularly burned crosses. I didn’t know what opportunities there were for a Black girl who grew up in a family that was full of love but short on money. And I didn’t see myself as a future leader because I didn’t see many Black Americans, especially Black women, in positions of power.

But over time – as leaders like Dr. King moved our country closer to its founding promises, my life started to change as I know many of your lives changed. I started to dream. Education exposed me to new ideas and to different people. A research trip to Liberia ignited my passion for international affairs.

Role models like Ralph Bunche, a trailblazing Black diplomat and founding father of the UN. And Andrew Young, the first Black UN Ambassador and one of my predecessors – with shoes so big to fill that even now I am shocked that I am standing in his shoes – and then, he was a close advisor to Dr. King as well. They all inspired me to pursue a career in public service.

That 11-year-old that I talked about earlier, could never have imagined she would become the U.S. Ambassador to the United Nations. But here I am. [Applause.] Humbled by the position I now find myself in.

Determined, more than ever, to realize Dr. King’s dreams for all of those who have been left behind. And also, for all of those who follow like my grandchildren who are here with us today, Lydia and Luca. Because we can’t be content with the status quo. Not when glaring economic inequities between Black and white Americans persist. Not when the phrase Black Lives Matter remains up for debate.

Dr. King, in his Nobel Peace Prize acceptance, said he had the “audacity” to believe that children deserve three meals a day. But right now – right now, the world is experiencing the worst food security crisis we have ever seen because of Russia’s brutal unprovoked war on Ukraine. A food security crisis that also impacts people right here in the United States, in this capital.

Dr. King called on us to commit to that “noble struggle for equal rights.” But both here at home and around the world, minority groups face prejudice and persecution. Xenophobia paints refugees and immigrants as outsiders. The Jewish community is increasingly the target of antisemitic attacks. And African Americans are still held back by entrenched systems of racial injustice.

Dr. King led a movement that demanded dignity, fundamental freedoms, and basic human rights for all. But in Iran, a young woman was killed for allegedly wearing her hijab incorrectly. Since then, the regime attacked, jailed and even killed peaceful protestors. And in Afghanistan, the Taliban is denying women and girls the right to education. A right enshrined in the Universal Declaration of Human Rights.

Dr. King would ask that we confront all these moral challenges with the fierce urgency of now. But he would also ask that we hold space for reconciliation. King believed in combatting injustice with love, malice with magnanimity.

And this has always been my approach to diplomacy. In any heated negotiation – any heated debate, I try to lead with kindness. To connect with the person across the table from me. To make room for empathy. We need more of that. More dialogue. More understanding. More reconciliation.

I am one of the three million people that visit this memorial every single year. And sometimes several times a year. And every year, the words etched into these towering, sandstone walls fill me with hope, they fill me with purpose.

Today, Americans of every race, ethnicity, age, gender, religion, and orientation will roll up their sleeves in service to others. And tomorrow, and every day after that, we must carry this spirit of service, love, and kindness forward.

We must continue to fight for those who are not yet free.

We must commit to the noble struggle.

We must dedicate ourselves to the dream. And we must dream big.

To paraphrase Dr. King, by doing so, we will make a greater person of ourselves, a greater nation of our country, and a finer world to live in.