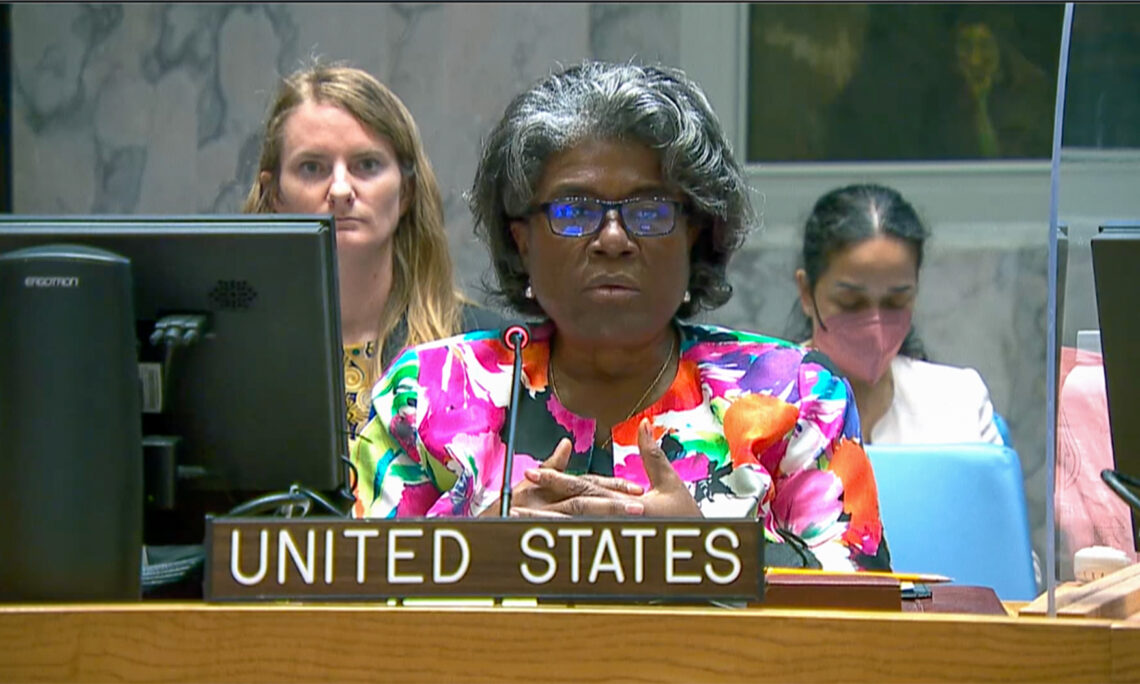 Thank you, Madam Foreign Minister for convening this vital debate. And thank you to Secretary-General Guterres for participating today. I also want to express my appreciation to all the briefers and representatives from regional organizations who have joined us today. The role of regional organizations is critical to elevating the women, peace, and security agenda and we welcome their willingness to do more and the critical role that they all play within their respective organizations.

We have seen the disproportionate threats women and girls face in countries and conflicts around the world, including in Mali and Afghanistan, Myanmar and Ukraine, Ethiopia, and elsewhere.

I want to point out that several UN sanctions regimes, such as for South Sudan and Yemen, include designation criteria for those who perpetrate violence against women. We encourage the Security Council to continue to use these tools as it did for Osama al-Kuni Ibrahim, a notorious human trafficker in Libya. In Afghanistan, the Taliban has constrained and, in many areas, eliminated, women’s participation in political, economic, and social spaces. They have made no less than a dozen formal announcements since last September restricting the rights of women and girls.

Once again, we reiterate our call to the Taliban to reverse these restrictions on education, employment, and movement. And we urge the Taliban to allow women to fully and meaningfully participate in Afghan society. The contribution of women will allow Afghanistan to prosper in the years ahead; but the exclusion of women and girls will erase the possibility of stability and economic gains in Afghanistan.

And we cannot talk about the women’s peace and security agenda without reflecting on the consequences of Russia’s horrific invasion of Ukraine and the disproportionate impact it has had on women. As we made clear earlier this month, we continue to see mounting credible reports of atrocities committed by Russia’s forces against civilians, including horrific accounts of gender-based violence and conflict-related sexual violence. There must be accountability for these atrocities as well as those committed by others against women and girls. Perpetrators cannot act with impunity. Regional organizations must play a role here as well and we commit to working with you. As we use every tool at our disposal, we must also work together to strengthen prevention efforts, promote justice in its various forms, as well as provide trauma-informed support services for survivors in the near- and longer-terms.

But one thing that I want to make clear isn’t lost on us, is that women are not passive victims. They are survivors. They are courageous. And they are consistently at the front lines of peace building, both at the grassroots and at the national levels. Women actively take steps to protect their communities from conflict – and they bring a unique understanding of local and regional dynamics to peace processes necessary for sustainable agreements. So, prioritizing the women’s peace and security agenda won’t just changes the lives of women and girls, it will also plant the seed for a more peaceful future for them. Which is why we must make meaningful and lasting progress in addressing gender inequality in all its levels of our society. And as several of our speakers stressed, we must take actions, in addition to words. We must address harmful gender and societal norms.

And we must not, as a Syrian woman told me during my recent visit to Turkey, stop feeling a sense of outrage at violence and atrocities committed against women. And we must continue to promote the full participation and inclusion of women in decision-making roles at all levels of conflict prevention, resolution, and peacebuilding processes.

To that end, I congratulate the regional organizations – including those here today like the AU and OSCE – who have adopted WPS strategies. Now, they must be translated into actions. But regional organizations also play an essential and necessary role in encouraging countries to adopt and implement national action plans on WPS. Your regional leadership on promoting women’s full, equal, and meaningful participation in peace and security processes is invaluable – and is a powerful signal for individual countries to do the same.

And one area where regional organizations can truly make a difference is in creating a safe space for women peacebuilders, journalists, and civil society. We must all work together to empower these actors and prevent acts of violence against them, including through the misuse and exploitation of digital technologies for online harassment and abuse – and the spreading of gendered disinformation by state and non-state malign actors.

Colleagues – the United States remains fully committed to advancing Security Council Resolution 1325 as a matter of peace and security for everyone. Our responsibility is immense. But our opportunity to change lives, if we do fully commit to the WPS agenda, is even greater. Thank you, Madam President.