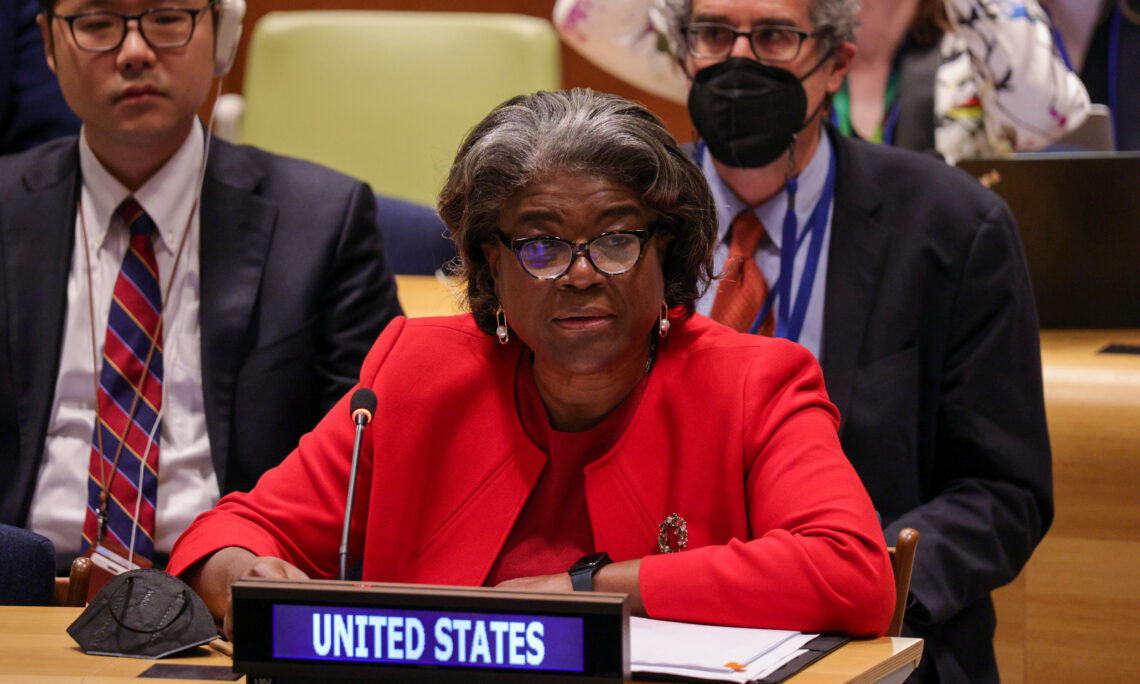 The resolution this Economic and Social Council will consider today is an important one. It will reverberate across the globe. This resolution answers the call of civil society voices in Iran. So, I’m thankful to you, the Iranian activists in the room and those around the world, for your courage, for your foresight, for your sacrifices, and for your leadership.

Mahsa Amini just wanted to finish her studies. She wanted to start a family. She wanted to live a normal, happy life. She was just a student. But now she’s a martyr. On September 13, when Mahsa stepped off a train in Tehran, she was accosted by the so-called “morality police” – and accused of wearing her headscarf improperly. She was thrown in a police van. And she was reportedly beaten on her way into custody.

We know little about what happened after that. But we do know Mahsa fell into a coma. We know three days later, while still in police custody, she died. We know she was killed for the crime of being a woman. And for too long, for too often, this was not such an unusual thing in Iran.

The Iranian government probably thought Mahsa’s death would just be another statistic. A little addition to its long record of state-sponsored violence against women. But this time – this time – was different.

Two brave women reporters, Niloufar Hamedi and Elaheh Mohammedi, told her story. And when the people of Iran heard it, they said enough was enough. Iranian women and men, across ethnicities and social classes, stood up to protest. They have demanded their basic human rights. They have come together through a simple rallying call: woman, life, freedom.

The Iranian government responded with brutality. They threw Niloufar and Elaheh into solitary confinement, where they remain, like so many other journalists and activists. Young women and girls have been killed or disappeared for speaking out – women and girls like Sarina Esmailzadeh, Nika Shakarami, and so many others.

In fact, government security forces have reportedly detained and tortured thousands of people, killed hundreds of peaceful protestors, and badly injured many more. Men supporting women in the streets are now being targeted with the death penalty.

One young woman, a 19-year-old university student told fellow activists how she and her friends make sure to say goodbyes every time they leave their homes. Because they know it is entirely possible when they leave, they will never return.

These women and activists have appealed to us, the United Nations, for support. They made their request to us loud and clear: remove Iran from the Commission on the Status of Women. The reason why is straightforward. The Commission is the premier UN body for promoting gender equality and empowering women. It cannot do its important work if it is being undermined from within. Iran’s membership at this moment is an ugly stain on the Commission’s credibility.

Colleagues, in line with our work, votes are often complicated – there are few obviously right and wrong answers in diplomacy. But today – today – we have an opportunity to do something that is clearly the right thing to do.

We can act, in this moment, to support women. We can act in direct response to our constituents – the global community of women. The Iranian government wants nothing more than to wiggle its way out of this vote. To use misinformation and procedural tricks to obscure the truth and avoid accountability.

But today, I urge you to keep this simple. We have Iranian women and activists here in the room with us right now. Let’s do right by them. Let’s do right by women and girls around the world. Let’s vote to remove Iran from the Commission on the Status of Women. Let’s do this for women. For life. And for freedom.