Home Home | Search Results | Remarks by Ambassador Linda Thomas-Greenfield at a Memorial in Remembrance of The Honorable Madeleine K. Albright 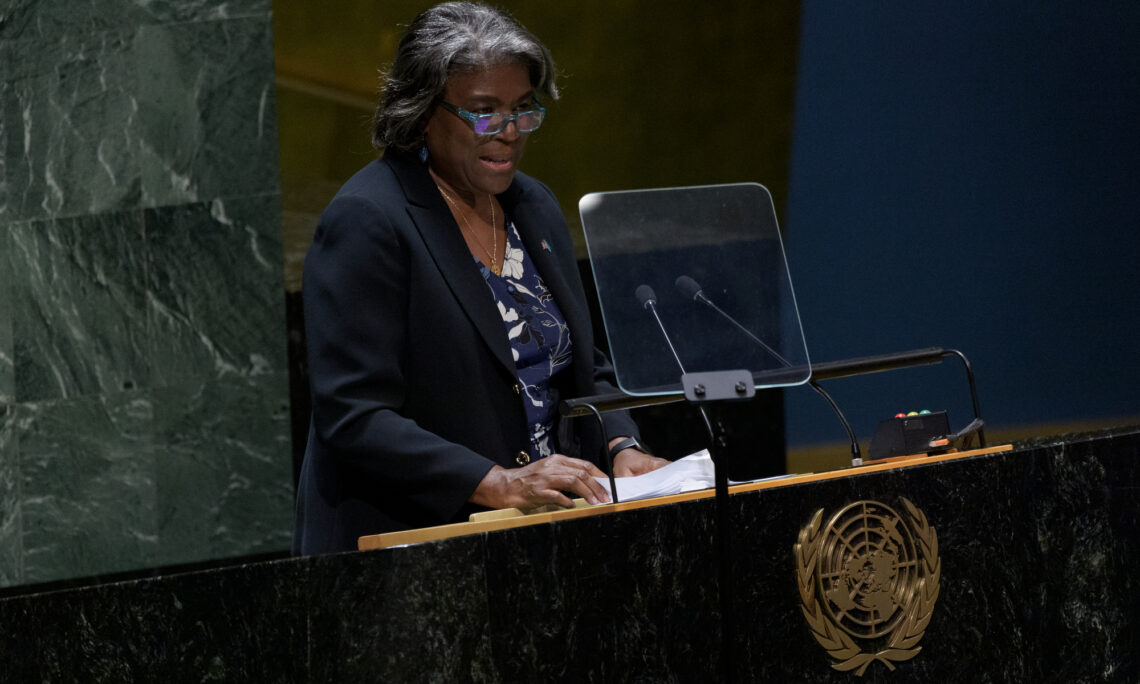 I want to thank you – thank all of you for being with us today to honor the legacy of Madeleine Korbel Albright, or MKA, as we all like to call her. I’m so grateful that we are joined by Madeleine’s daughter, Alice, and by her grandsons David and Daniel Bowes, and by other honored guests.

And I want to take you back – as we’re sitting here – I’d like to take all of you back to the 1990s. And that was when I first met Madeleine. I was a Foreign Officer stationed in Geneva and Secretary Albright came to town for a conference. And I had long admired her from afar, but this was going to be my first time seeing her in person and up close – and I literally was blown away. She was such a force, and you could feel her presence as soon as she walked in the room. And when she spoke, people listened. And when she was in the room, people wanted her to listen to them. And I remember thinking to myself – this is what leadership looks like. And this is how I want to be viewed as I move through my carrier in diplomacy. Little did I know that I would be sitting in the same chair one day that she sat in.

Madeleine Albright might have been small in stature, but she was huge in status. And that status was not inevitable for her. In fact, it really was unlikely. Madeleine grew up in the shadow of conflict. She fled Nazi invasion and Communist oppression and came to the United States as a refugee. But from humble beginnings, she reached heights that no woman had ever attained – becoming the first woman to serve as Secretary of State. Sixty-three men had done that job before her, but she came to Foggy Bottom and made that office and that position her own. She put human rights and democracy at the center of every issue. And she quickly earned the respect of the Department, of our allies, and even our adversaries.

And while she was the first, she was determined not to be the last. Madeleine Albright made sure the doors she worked so hard to open would never, ever be shut again so that other women could follow in her footsteps, like our 66th Secretary of State, Condoleezza Rice, and our 67th Secretary of State, Hillary Rodham Clinton, who is here with us today. Thank you, Madam Secretary, for joining us.

The world has lost an icon. I saw that on the day of her passing – we were in this room and so many people paid tribute to her memory. And then the tributes and memories started pouring into the U.S. Mission, representing countries from all around the world. But I am grateful that, in these challenging times, as our values and our international order are being tested, her example will endure.

And when I sit in this chamber, behind the placard of the United States, I look to that example of how to be grateful, graceful, and also firm. How to be kind and also strong. She taught us all what it means to devote our lives to the service of others – and I mean our entire lives. She never stopped teaching, mentoring, speaking out for what she believed in, right up until the very end.

Madeleine Albright was famous for her pins that she wore, each with a different story and symbolism. And as I said before, I will always have her sitting on my shoulder – guiding me, guiding my path, guiding my thoughts – as we work some of the most difficult issues around the world. I will miss my friend and role model, Madeleine Korbel Albright.

Throughout her long career in public service, Madeleine Albright was a committed champion of multilateralism, and a strong believer in the need for a robust United Nations capable of standing up for human rights and fundamental freedoms. And I am therefore honored to invite Secretary-General Antonio Guterres to offer his reflections.