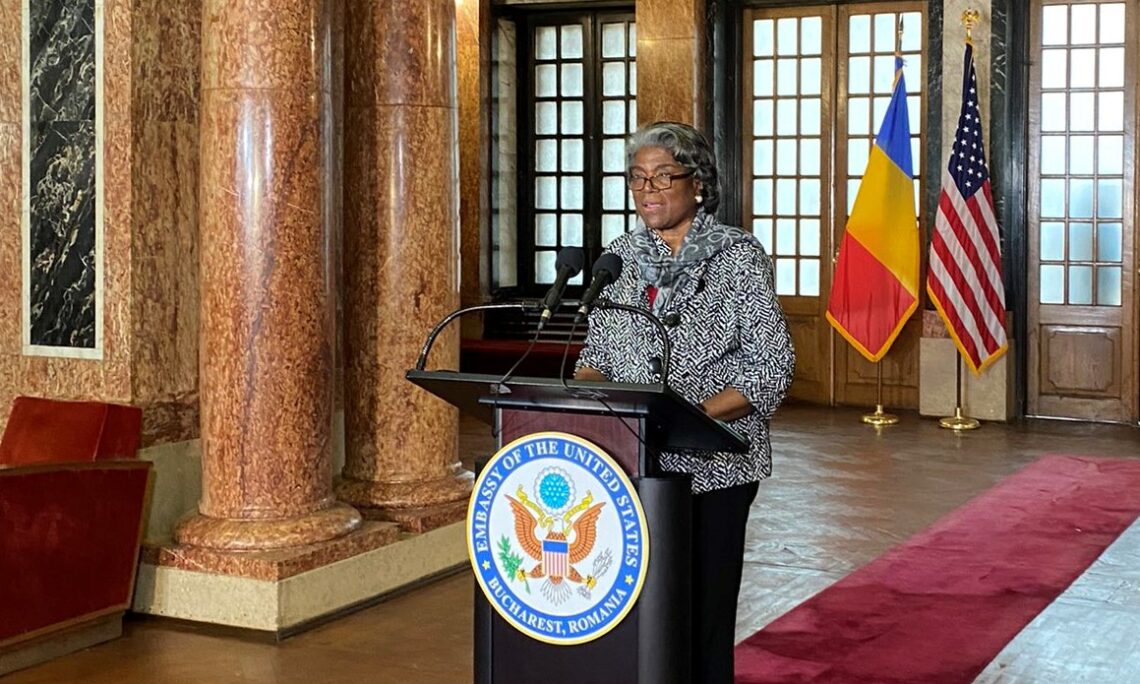 AMBASSADOR LINDA THOMAS-GREENFIELD: Good afternoon, everyone. Let me start by thanking the people of Romania, thanking them for welcoming me and my delegation here today. The warm welcome you’ve offered us already is the same welcome that so many Ukrainian refugees have experienced the past few weeks. The international community is so thankful for your tremendous hospitality and generosity.

As I told Prime Minister Ciucă earlier today in our robust discussion, I want the Romanian people to know that you are not alone. In all of your humanitarian efforts, the United States is your committed partner. We support your lifesaving work, and we will do everything we can to help ensure all those escaping Putin’s unconscionable war have the food, water, supplies and services they need.

I’ve had the great privilege to meet with some of the beneficiaries of your hospitality. I met three young refugee women this morning. One of them told me she didn’t know whether to say she lived in Kyiv or she was from Kyiv. Another one said she didn’t want to apply for refugee status because she was still hopeful she could return home. All three of them have children that they are concerned and worried about, and so worried about their futures, and they were willing to share their sorrow with me. And what this has said to me during my visit is this is not just about the buildings the Russians are destroying, but it is the lives that they are destroying.

What I’ve been hearing on the ground is really important, and the images and the reports we’ve seen out of Ukraine over the past six weeks have been horrific, and the brutal, heart-wrenching attacks on civilians reported in Bucha yesterday have particularly shocked the world’s conscience.

As President Biden, Secretary Blinken, and I have said, we believe members of the Russian forces have committed war crimes in Ukraine. And we believe Russia must be held accountable.

I am immediately returning back to New York to do two things. One: I will take this to the Security Council tomorrow morning and address Russia’s actions firmly and directly. Two: In close coordination with Ukraine, European countries and other partners at the UN, we’re going to seek Russia’s suspension from the UN Human Rights Council.

A hundred and forty UN Member States have already voted to condemn Russia over its unprovoked war and the humanitarian crisis it has unleashed upon the people of Ukraine. My message to those 140 countries who have courageously stood together is simple: the images out of Bucha and devastation across Ukraine require us now to match our words with action. We cannot let a Member State that is subverting every principle we hold dear to continue to sit on the UN Human Rights Council.

Russia should not have a position of authority in that body, nor should we allow Russia to use their role on the Council as a tool of propaganda to suggest they have a legitimate concern about human rights. In fact, we see every day, including yesterday, heartbreaking reports about how little they care about human rights. Russia’s participation on the Human Rights Council is a farce. It hurts the credibility of the Council and the UN writ large. And it is simply wrong. Which is why we believe it is time for the UN General Assembly to suspend them.

With that, I’m happy to take your questions. Thank you.

QUESTION: Good afternoon. Diana Dumitrascu, National Television. Thanks for your visit. So former (inaudible) prosecutor Carla Del Ponte stated recently that the International Criminal Court should issue as soon as possible the highest (inaudible) following the war in Ukraine. So, my question is: Does ICC need a special approval from the United Nations in order to do that?

AMBASSADOR THOMAS-GREENFIELD: The ICJ has spoken already and indicated that what Russia is doing is unacceptable, and we will continue to work with the ICJ as well as others to hold Russia accountable.

QUESTION: Good afternoon. My name is Laura Gavrila and I’m from ProTV. Russia is part of the UN Security Council, and it can anytime use its veto. How can the Council take relevant and meaningful actions in this situation? What are the real steps that can be taken?

QUESTION: Good afternoon. Alexandru Vlădescu from Antena 3 Television, Romania. Do you think that Vladimir Putin should be tried, judged for war crimes? And (inaudible) could do something about this matter?

AMBASSADOR THOMAS-GREENFIELD: We have been clear that we think war crimes have been committed in Ukraine by the Russians, by Vladimir Putin, and that he and the others – other Russians who have been involved in this campaign – should be held accountable.

QUESTION: Good morning. Emilian Isailă from SpotMedia. Madam Ambassador, I want to ask you: Russia says that (inaudible) that’s in the stage, and how the U.S. can (inaudible) recently by (inaudible) in their next – their meetings? The UN will be sending (inaudible) a few more American (inaudible) organization documented that there (inaudible). What is going to happen in the very next future (inaudible)?

QUESTION: Hello. Alexandru Stănescu from G4Media. Russia requested a meeting of the UN Security Council to discuss on Monday what it called a provocation by Ukrainian radicals in the town of Bucha. After hearing several European and world leaders accusing Russian troops of committing a massacre or even a genocide there, where does the U.S. stand on Moscow’s request?

AMBASSADOR THOMAS-GREENFIELD: Thank you very much and thank you again to the people of Romania for your hospitality to the Ukrainians who have come, and you have so warmly welcomed them.