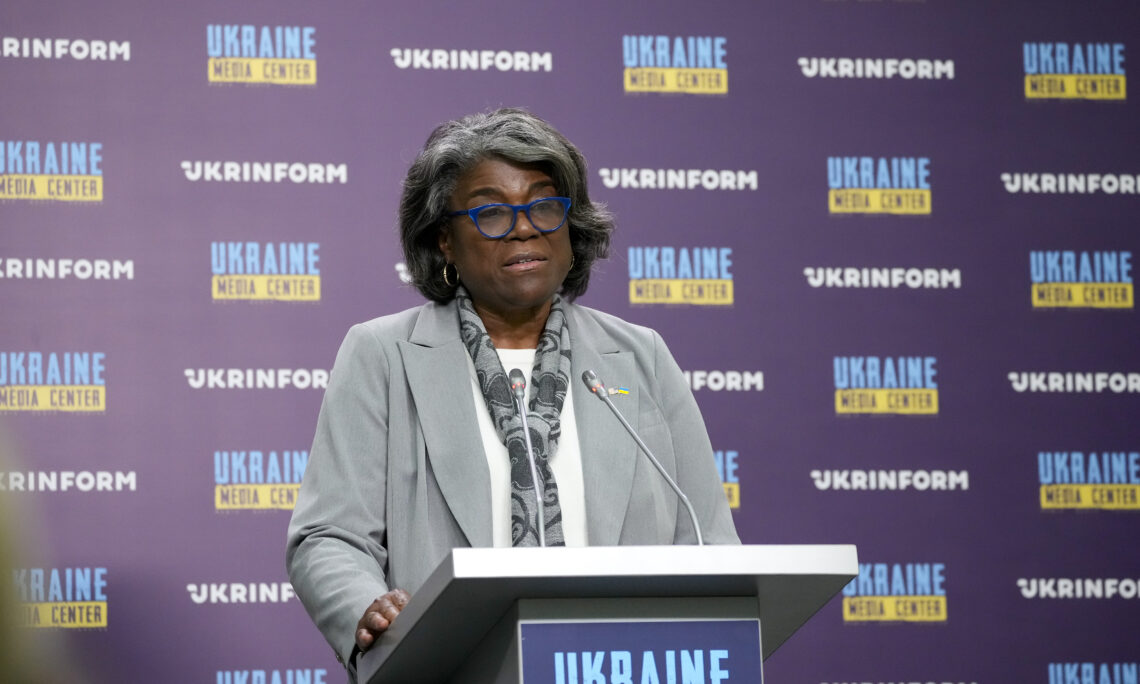 U.S. AMBASSADOR TO UKRAINE BRIDGET BRINK: (In progress) … integral part of how the United States supports and stands with Ukraine. She and her team have helped build and maintain a powerful consensus around the world in support of Ukraine’s valiant defense of your freedom and democracy against Russia’s barbaric conduct of its brutal war.

She also leads UN efforts* to increase food security and provide humanitarian aid, to hold Russia accountable for atrocities and crimes committed in Ukraine, and to rally the support Ukraine needs as Russia continues its cynical and inhumane attacks on Ukraine’s infrastructure, among many other issues.

We are incredibly fortunate to have her powerful voice and moral clarity at the UN Security Council as she calls out Russia’s lies and reinforces respect for the principles of the UN Charter.

And we’re also very glad to have her here in Kyiv. Ambassador, thank you so much for traveling here at this critical time.

AMBASSADOR LINDA THOMAS-GREENFIELD:  Thank you so much, Ambassador. And let me thank all of you for being here. It has really been an honor for me to spend the day in Ukraine.

I have seen a city and a country that is under attack. This is a city where Russian bombs have rained down on apartments and hospitals, orphanages and playgrounds. And yet, what I have seen – and felt – during my visit here is not a city destroyed, but a city strengthened, determined to survive.

The Ukrainian people are beyond courageous. They really are an inspiration to the world. I said this to President Zelenskyy, whom I also had the honor to meet with today. In our meeting, I reaffirmed our ironclad and unwavering commitment to the sovereignty and independence of Ukraine.

We discussed the three key priorities for my visit today: holding Russia accountable for its war crimes, addressing the unprecedented food security crisis, and ensuring Ukraine has everything it needs to prepare for the winter ahead.

On accountability, this morning I met with victims of war crimes, as well as their families. And they told me how horrifying their experiences were. One woman described being taken by the Russians, tortured, the back pains that she was still experiencing, and I could see the pain on her face. I promised her and the others that the world is with them and the world was watching, and that I would share the pain they have gone through.

In fact, I then toured a forensic lab, where I saw how crime scene technicians are meticulously examining war crimes scenes and collecting necessary evidence. Their findings will be used by officials to build the case against the perpetrators of these horrifying atrocities.

So my message to Russian forces is simple: We will hold you accountable for your war crimes. We will have justice.

On food security, as I told President Zelenskyy, this was a personal priority for me. I had the great privilege of visiting a facility that stores and processes grains before it goes out to the Ukrainian people and to the world. And I thanked the staff for their heroic, vital work.

We know that Ukraine has long been a breadbasket for much of the developing world. But Russia’s invasion turned Ukraine’s rolling wheat fields into battlefields. And Russian forces have deliberately attacked so much of Ukraine’s agricultural infrastructure. They have spoiled fields, they’ve bombed grain silos, and literally stolen tractors.

These are not only horrific attacks on civilian infrastructure. They are also attacks on the world’s food supply. And they have exacerbated the worst food security crisis any of us have ever seen. This extensive sabotage campaign has made matters worse for countries like Ethiopia, South Sudan, Somalia, Yemen, all of whom are facing famine. And starvation and acute malnutrition are taking other countries by storm.

Tonight, more than 828 million people will go to bed hungry – 828 million. That is why it is so important that the Black Sea Grain Initiative is renewed. I had a productive discussion on that very topic in my meeting with the Minister for Infrastructure Kubrakov today.

Finally, as winter approaches, we are very focused on Ukraine’s energy needs. Russia continues to attack Ukraine’s energy infrastructure. But we refuse to let Ukrainians freeze or starve because of Russia’s brutal, unnecessary, illegal, and inhumane war. So today, I visited an IDP Collective Center, partially funded by USAID, which is ensuring displaced people have food, shelter, warmth this coming winter.

And there I was proud to announce an additional $25 million from USAID to support vulnerable people in Ukraine during the harsh winter ahead. These new funds will expand on our winterization planning and response efforts and scale up assistance to nearly 75,000 of the most affected households. The United States is proud to provide this humanitarian relief as we do everything we can to help the Ukrainian people during the harsh winter months ahead.

Being in Ukraine has opened my eyes wider and really strengthened my own resolve. I met a young girl today, 10 years old, and her only request to me was: “Can you help us end this war? I want to go back to school. I want to see my friends again. What can you do to make that happen?”

So I am going back to New York determined to hold Russia accountable, to continue to take on the global hunger crisis, and to do everything we can to help Ukraine through the winter months, including to help this young girl go back to school.

The United States will stand with Ukraine, united with our partners and allies, for as long as it takes. Ukraine will never be a victory for Russia. Democracy will prevail in this country.

MODERATOR:  And we have time for a couple of questions here. Let’s go to the back row in the red sweater.

QUESTION:  Thank you, Your Excellency. Voice of America, Anna Kostiuchenko. Considering that Russia has veto power and strong influence on many countries, is it realistic to exclude Russia from the UN or to bring Russia to justice for war crimes in Ukraine? And will we see Vladimir Putin in International Court of Justice one day? Thank you.

AMBASSADOR THOMAS-GREENFIELD:  Is it realistic to hold Russia accountable? Yes, it is. And we have done everything possible to isolate Russia in the Security Council, and we have isolated them in the General Assembly. And while they do have the veto power, they’ve never been able to veto our condemnation, our voices. We got 141 votes condemning Russia in the General Assembly and we got 143 condemning their annexations.

So Russia has heard loudly and clearly from the world that what they’re doing is unacceptable, and while they have the veto power, that veto power is not shielding them from condemnation.

MODERATOR:  We have time for one or two more. We can go to – yeah.

QUESTION:  Thanks. Madam Ambassador, Greg Palkot, Fox News Channel. Thanks for coming here and speaking with us. Number one, diplomacy is your forte – there are reports that the Biden Administration is trying to nudge Kyiv in the direction of talking with Moscow. Did you have any message about that today?

And just a follow-up. Also, it’s a bit of an unsettled political time in the States right now. Did you have any assurances to Kyiv that bipartisan, strong support would continue for Ukraine? Thank you.

AMBASSADOR THOMAS-GREENFIELD:  Thank you for the question. And as for the first question, I think the Ukrainian president spoke for himself when he spoke last night and said that he’s willing to have diplomacy with the Russians, but they have to honor their borders. They have to abide by the UN Charter. They have to remove their troops from this country. And the international community is standing with Ukraine. Ukraine has to be in the driver’s seat, but we certainly support their efforts.

And then on the second one, yes, Ukrainians and others have asked with the election if that will have any impact, if there’s a change if that will have any impact on our support. And what I’ve said to Ukrainians, and I’ll say here: We’ve seen bipartisan support for Ukraine. The President is committed to continuing to work with the Congress to ensure that that support continues.

MODERATOR:  Last one, we can go in the side – okay, thank you.

QUESTION:  Thanks, Ambassador. Tom Soufi Burridge, ABC News. You don’t meet a Ukrainian who doesn’t thank the U.S. for the level of military support to this point, but we know that the U.S. has been unwilling so far to go further in certain directions – for example, long-range missiles for the HIMARS to hit Russian positions well behind enemy lines, and also sign off export licenses so that Ukraine could even buy F – or procure F-15s and F-16s, not even from the United States but from third-party countries. What indications have you or can you give the people of Ukraine, the Ukrainian government, today that the U.S. is actually willing to step up its military support in particular areas like that, which could really make a difference on the battlefield?

AMBASSADOR THOMAS-GREENFIELD:  Look, the Ukrainians have no question about U.S. support for their efforts. We have been strongly behind them since the beginning of this war, and we will continue to stand with them. We continue to have discussions with them on their needs for defending themselves, and we have committed to remaining staunchly behind them until they win this war.

MODERATOR: I think that’s all we have time for. Thank you very much.

AMBASSADOR THOMAS-GREENFIELD:  Good. Thank you all.