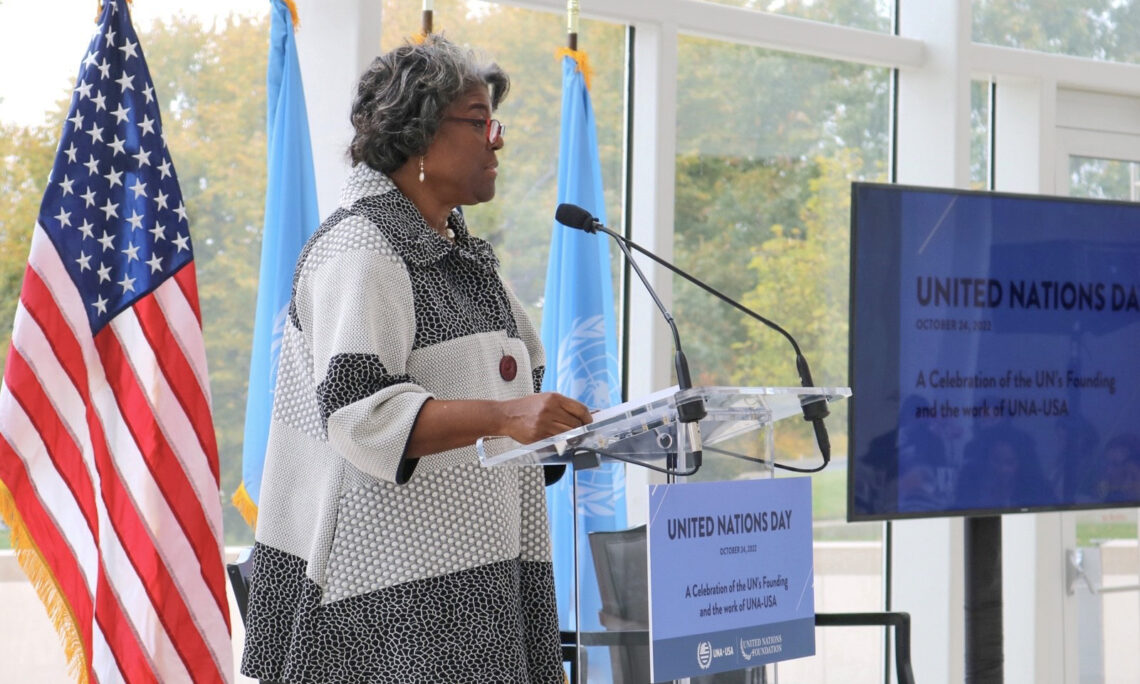 Thank you. I’m really, really delighted to be here. Thank you, Elizabeth for that kind introduction, and let me thank the U.S. Institute of Peace for hosting us today, the UN Foundation, and UNA-USA for bringing us together to celebrate United Nations Day and the UN’s founding. So if I can get a hand of applause for them. [Applause.]

Ladies and gentlemen, it was 77 years ago today that the United States – joined by the United Kingdom, France, Russia, and China – ratified the United Nations Charter, along with a majority of other signatories. We were determined to, as the UN Charter’s opening words stated, “save succeeding generations from the scourge of war…reaffirm faith in fundamental human rights…and live together in peace…as good neighbors.”

Last month, I had the opportunity to visit the birthplace of the UN Charter in San Francisco. I want to thank again the UN Foundation for hosting us there. I spoke from the Fairmont Hotel, where the Charter was drafted and where many of the delegates negotiated its contents.

What is so often forgotten is that we almost did not have a UN. The delegates kept encountering sticking points. Drafts were torn up, literally. At several different moments, it looked like the UN was going to fail before it even existed. It kind of reminds me a little bit of how we negotiate today. But knowing the alternative – the destruction and horrors of aggression and war – the San Francisco delegates came together and agreed on the Charter of the United Nations. And the world is so thankful they did.

After all, the Charter and the institutions it set into motion have brought on an extraordinary amount of peace, security, and prosperity for the world. They have not been perfect, of course. Wars have still started. At times, deadlock has prevented progress, and human suffering has persisted. And the United Nations as an institution has struggled with mismanagement, weaknesses, and bias. Today, we see many of those challenges on full display.

Russia, a permanent member of the Security Council, is blatantly violating the UN Charter with its horrific war in Ukraine. The Security Council continues to shirk its duty on Ethiopia, even though that war’s causalities rival what we are seeing in Ukraine. And we have to push back on China, who so often attempts to reinterpret the Charter to its own benefit and attempts to place sovereignty and state rights over universal human rights.

And that’s a long list of accomplishments. But even if we had not done any of that, the UN would still be worth it. And I think all of you would agree. Because while the UN has failed to prevent every war, it has succeeded in preventing world wars. And it remains the only place on earth where all of the nations of the world can come together. We need a forum. We need a place to talk things through. And the UN provides it. As I often say, if the UN didn’t already exist, we would try to invent it – immediately.

Of course, the UN has structural challenges. And we all agree on that. It can be better. And to take on the challenges of the 21st century, it must be better. It must do better. So these past two months, the United States has begun to actively engage in efforts to reform the UN. I started this by laying out principles for responsible behavior in the Security Council in San Francisco. And then President Biden announced our new position on expansion of the Security Council during High-Level Week. We support expansion in both permanent and non-permanent categories, and we support permanent seats for both Africa and Latin America.

Of course, this is just the first step [Applause.]. This is just the first step of rolling out our affirmative agenda at the UN. We have begun a series of wide-ranging consultations with Member States, regional blocs, and reform groups. This “listening tour” is to hear ideas. After all, part of realizing a more representative Council is ensuring everyone sees themselves in the process, although we know everyone can’t be on the Security Council. That includes civil society. That includes all of you, and I’d like to hear your ideas on reform and on the future of the UN, as well.

This UN Day is also an occasion to recommit to the important work we’re doing through the UN right now: ending COVID-19; tackling climate change; addressing conflicts; rescuing the world from the worst food security crisis any of us have ever seen. Doing everything – and I mean everything – in our power to meet the Sustainable Development Goals. Ensuring that humanitarian aid reaches the world’s most vulnerable. And the list goes on and on.

That work is immediate and urgent. But it also requires long-term vision. It requires leaders who understand the UN, inside and out, and see how to use the world’s most important multilateral body effectively. Those leaders do not come out of nowhere. They are recruited from a pipeline. They are developed through careers and out of the Foreign and Civil Service, the UN, civil society, academia, and elsewhere. And they come from all over the world. And it starts at the beginning. It starts with first jobs and internships.

Which is why today in honor of UN Day, I’m so proud to announce that UNA-USA has established a new $500,000 Scholarship Program for American citizens to pursue internships at the United Nations. [Applause.] This inaugural scholarship program is expected to fund at least 50 scholarships over the next three years. This private initiative will be funded through the generosity of Schmidt Futures, the Eleanor Crook Foundation, and UNA-USA. [Applause.]

This scholarship is just a start, but it will do so much good. You may be surprised to learn that when candidates are being evaluated at the UN for some categories of senior level positions, candidates from within the system are eight times more likely to be chosen. And how do you get into the system? You get a head start. You start as interns. But UN internships are unpaid.

So I can tell you as a young person majoring in international affairs and wanting to work in that world, I could not work in New York as an intern. I couldn’t work at the State Department as an intern, because even the State Department internships were not paid when I came through. And if you don’t pay your interns, you’re going to market out a lot of people who just can’t afford to not work [inaudible]. And you’re going to market in those people who have the wealth to do that or somebody else to provide for them. And so this scholarship is a springboard for young people who are interested in working in the United Nations.

New York is an expensive city. And while some other countries support their nationals with funding, the United States does not. And by default, that excludes Americans from underprivileged backgrounds from getting their starts at the UN. That is not representative of America. We need a diverse pipeline of leaders who look like America and understand the UN inside and out.

Here’s another way to think about it: Imagine all of the young people who might have grown up in the system who never had a chance. Imagine me never having had that chance, not [inaudible] to work in New York. So now, thanks to this scholarship, Americans who come from backgrounds like mine can. By supporting applicants facing financial barriers, the scholarship program will increase opportunities, will increase equity and diversity among American intern candidates. And I’m proud to say that this initiative will target colleges and universities previously underrepresented at the UN, and that includes HBCUs.

One of America’s most powerful competitive advantages is our diversity. Our different backgrounds make us stronger. They make us smarter. And they make us better. We need our best at the UN. We need to make sure we are represented there in all of our diversity. With all of our strength. And thanks to the generosity of the organizations that I just mentioned, we’re getting one step closer to doing that.

It is my sincere hope that this program will grow and expand for decades to come. Because today’s students will determine tomorrow. They are the future of the UN. But I would add, they are also the future of the world. We’re going to be depending on these young people to make a difference, to fix the problems that people of my generation have not been able to fix. And as the last 77 years have shown us, that future will need people who understand to their core – to their absolute core – how the UN can continue to save the world for the future.