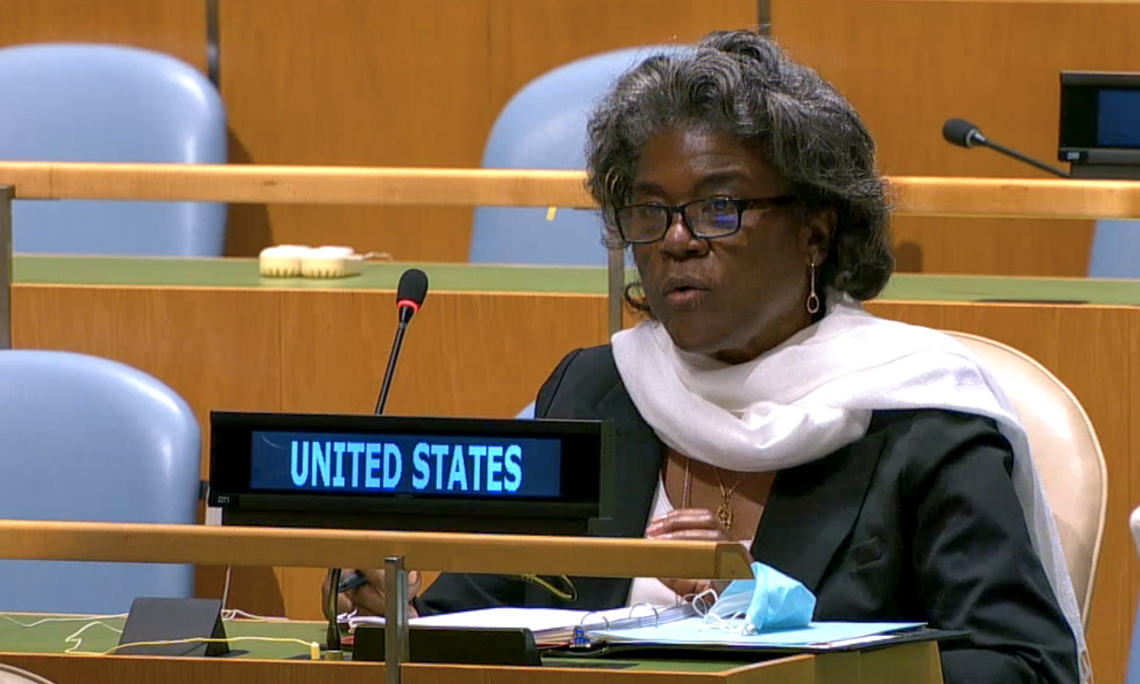 Thank you, Mr. President. Thank you for convening today’s meeting and thank you for your statement. I also wish to thank Secretary-General Guterres for his updates on the humanitarian situation and the human rights situation in Syria.

As you heard from the Secretary-General, Syria requires a peaceful path forward. Security Council Resolution 2254 not only provides that path, but it remains the only way to secure the future and stability of the Syrian people.

The United States is committed to this internationally agreed upon roadmap. We enthusiastically support the drafting of a new constitution, free and fair elections administered under supervision by the United Nations that includes the diaspora, and the release of arbitrarily detained Syrians.

We know the Assad regime will attempt to use the Syrian presidential election this May to legitimize its own rule. Do not be fooled: These elections will neither be free nor fair and will not be representative of the Syrian people.

The United States also condemns the closure of Bab al Salam and al-Yaroubiya border crossings. Last December, the General Assembly adopted a resolution calling for the reauthorization of these crossings. Our message could not have been clearer. These continued closures have prevented vital humanitarian aid by the United States and by the United Nations. It is simply deplorable, and it has unnecessarily deepened the suffering of millions of Syrians.

Just yesterday, Secretary of State Blinken and I participated in a UN Security Council meeting to discuss the humanitarian situation in Syria. We heard from UN officials and from Dr. Amani Ballour about the dire need for humanitarian aid and the necessity of the UN’s cross-border mechanisms.

To that end, the re-authorization and expansion of the Syrian cross-border humanitarian mechanism is essential to the delivery of food and COVID-19 vaccines to 2.4 million Syrians who depend on this assistance every month. This mechanism must not be allowed to lapse in July. The lives of innocent Syrians depend on it.

The United States is doing our part to provide aid and to help ensure unhindered humanitarian access. The suffering is staggering, with more than 13 million people in need of humanitarian assistance in Syria – 60 percent of the population. That’s why I announced $596 million in additional humanitarian assistance at the Brussels V Conference today. We hope others will join us in supporting those who have faced the brutality of the Assad regime.

The Syrian people deserve a safe, stable, and hopeful future. As I have said throughout this month, the 11th anniversary cannot look like the 10th.