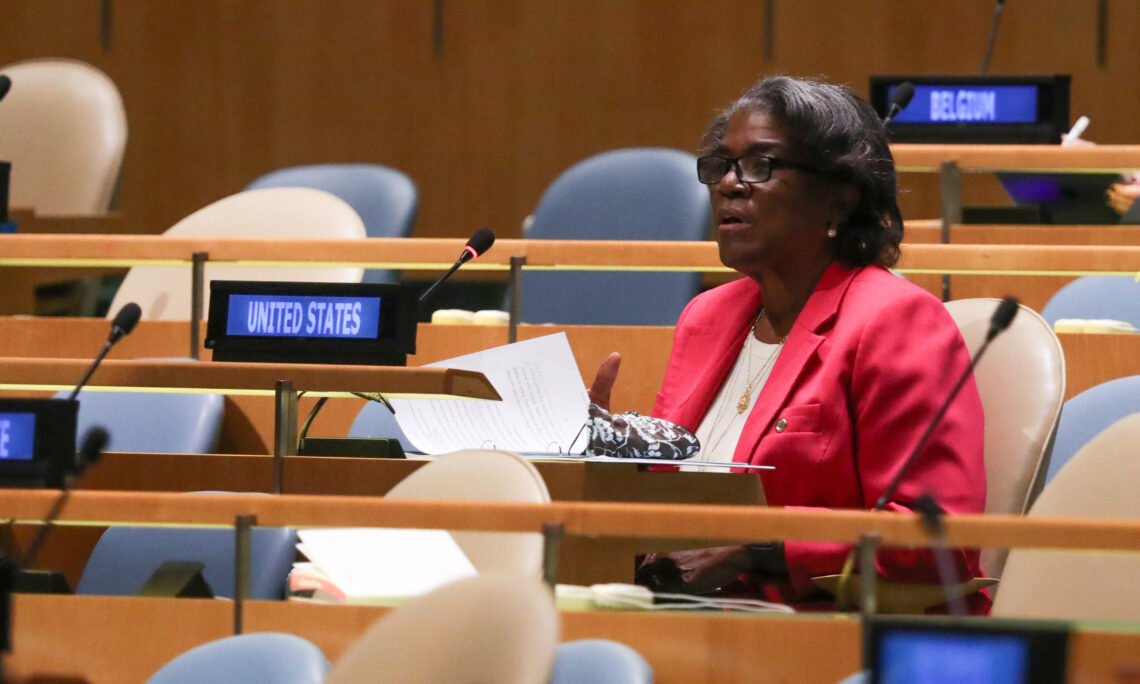 Thank you, very much. And let me start, Mr. President, by thanking you for convening today’s meeting. We welcome the presentations from the UN Commission of Inquiry and from Syrian civil society, which reflects the Commission’s exceptional work alongside brave Syrian human rights defenders who, despite grave risks, continue to document atrocities and press for accountability.

We also appreciate the work of the Office of the High Commissioner for Human Rights and welcome the Assistant Secretary-General’s participation.

And most of all, I want to thank Mazen Darwish, Wafa Moustafa, and Sabeh Al Hallak for being here today, and for your tireless efforts to press for human rights in Syria. You really are heroes, and it is incredibly important that we hear from credible voices on the ground.

This month marks a full decade of untold suffering at the hands of the Assad regime. How tragic that this is the first time in those 10 years that the General Assembly will finally hear directly from Syrian survivors and the Commission of Inquiry about these appalling atrocities. Atrocities so terrible that some of them, as the Commission of Inquiry has made clear, rise to the level of war crimes and crimes against humanity.

I want to address three aspects of the Assad regime’s brutality: the detention centers, the use of chemical weapons and violence against innocent citizens, and the disruption of humanitarian aid.

First, the Assad regime continues to imprison tens of thousands of innocent Syrians. Women and children, the elderly, doctors, aid providers, journalists, human rights defenders. These innocent civilians are denied fair trials, they’re subject to torture, sexual violence, and inhuman conditions, and many are at grave risk of being exposed to COVID-19.

At least 14,000 Syrians have been reportedly tortured and tens of thousands forcibly disappeared. We demand that the status of all those detained be made public. And we demand that the bodies of the deceased be returned to their loved ones with the time, place, and cause of death.

Second, the Assad regime has deployed chemical weapons against its own citizens. They have slaughtered peaceful protestors, and destroyed civilian facilities throughout Syria, devastating numerous hospitals and homes. Approximately 12 million people, almost half of the pre-war population, have fled their homes and are now internally displaced or refugees.

And third, the United States condemns the closure of Bab al Salam and al-Yaroubiya border crossings. These closures prevented vital humanitarian aid by the United Nations, and it is simply deplorable. And it has unnecessarily deepened the suffering of millions of Syrians.

Ten years ago, peaceful protestors stood up for themselves and for democracy. The Assad regime responded with snipers and tanks, has dropped barrel bombs and chemical weapons, blocked humanitarian aid in its ‘starve and surrender’ campaign, and systematically detained and tortured tens of thousands.

And yet, as our guests exemplify today, the Syrian people have persisted. We cannot let their persistence be in vain.

So, the United States stands with the Syrian people, Syrian civil society, and a wide group of international partners in demanding accountability and supporting a political solution as set out in UN Security Council Resolution 2254.

And we cannot emphasize enough the role of Syrian women in this process, and the importance of implementing Resolution 1325 and the Women, Peace, and Security agenda.

It is time to for the Syrian people, especially Syrian women, to be heard. And it is time for us to reach a real political solution. This is the only way to bring sustainable peace, stability, and security to the Syrian people.

With that, I’d like to end by asking a question to the panel: How can the international community better support former detainees and other survivors of the regime’s atrocities? And what can we do to help that we aren’t doing now?

Let’s endeavor to answer these questions.