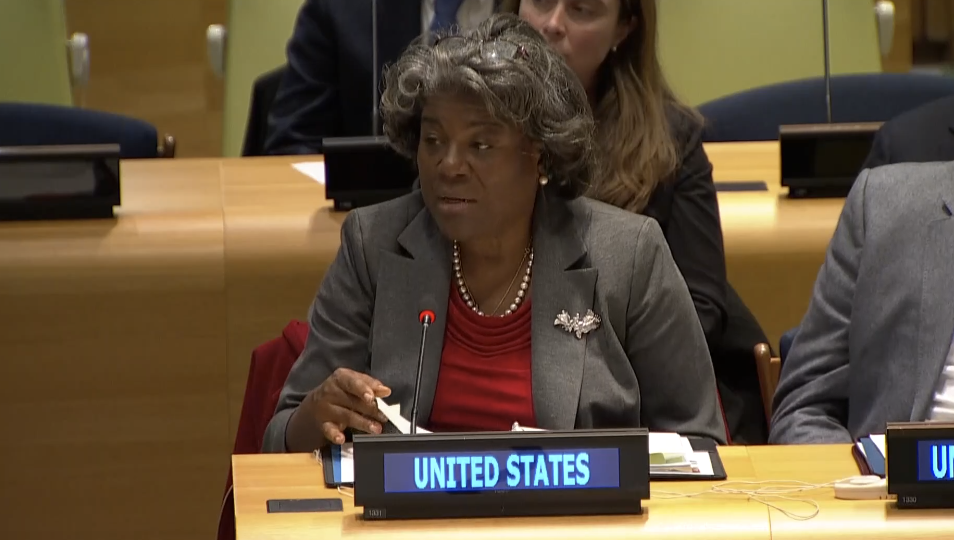 Thank you. Thank you, Martin, and let me thank Assistant-Secretary-General Jenca and the other briefers for your informative presentations. And I particularly want to thank Norway and Kenya for hosting this very important meeting and to say how delighted we are to be co-sponsors.

As we heard from leaders at COP27, this is the decisive decade for climate action. We must bolster our collective efforts to keep warming below 1.5 degrees Celsius and avoid the worst consequences of climate change. This work is urgent, and it requires all of us to step up. But as we work toward a cleaner energy future, we must also help people and communities adapt to the diverse effects of our warming climate. We need stronger, better-coordinated efforts to “climate-proof” infrastructure and water, health, and food systems. And this is especially true for the UN.

For one, it is clear that Special Political Missions and Peacekeeping Operations, which are working to address extraordinary challenges to peace and security, are already feeling the effects of climate change. In fact, many peacekeepers and Special Political Missions personnel operate in environments that are most exposed to the effect of climate change.

Increasing impacts of climate change, such as scarcity, resource competition, droughts, flooding, desertification, open up peacekeeping personnel to more risk and force them to work in increasingly challenging operating environments that are less stable and insecure. We see this in Abyei, where seasonal flooding gets worse and worse every year. Flooding, sandstorms, and other climate-related hazards limit peacekeeping troops’ mobility and ability to carry out their mandate.

We must do what we can to ensure Peacekeeping and Special Political Missions reduce their own carbon footprint. UN Peacekeeping is estimated to depend on renewable sources for only four percent of its energy usage, compared to the UN’s goal of 40 percent by 2025 and 80 percent by 2030. We are a long way away from those numbers.

We recognize that deploying renewables comes with its own set of challenges and costs, but it is important that the UN leads by example. With that, I want to close with two questions for the panel: First, how can the Security Council best support Peacekeeping Operations and Special Political Missions as they deal with the impact of climate change on their work? And second, where are we seeing the most acute impacts of climate change on peacekeeping and Special Political Missions?

Thank you again for this briefing. The United States looks forward to working within the Security Council to enhance the effectiveness of our Peacekeeping and Special Political Missions.