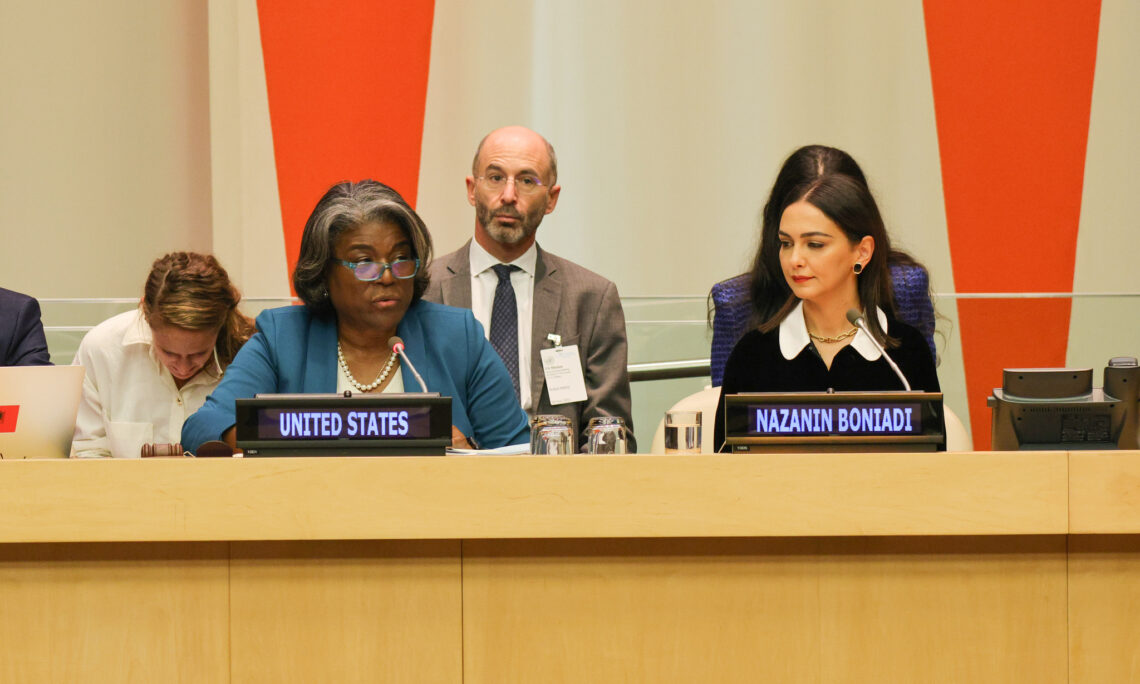 Thank you, Nazanin. That was an extraordinarily powerful statement. And thank you for your call to support the freedom-loving people of Iran. And that’s exactly why we are here today. Let me also thank Dr. Ebadi, for joining us from London to share your important message and UN Special Rapporteur Rehman for shining a spotlight on what is happening in Iran today.

According to someone who knew Mahsa Amini, all she wanted was to live a normal and happy life. She dreamed of starting a family after she finished her studies. But these hopes and dreams were crushed by the tyranny of the so-called “morality police” who are charged with enforcing Iran’s conservative dress code. On September 13th as you’ve heard, Mahsa stepped off a train in Tehran, she was accosted and accused of wearing her headscarf improperly. She was thrown into a police van and reportedly beaten on her way into custody.

We know little about what happened after that. But we know Mahsa fell into a coma, and three days later, while still in police custody, she died. We know she was killed for the crime of being a woman. The Iranian government probably thought her death would be just another footnote in its long record of state-sponsored violence and discrimination against women. But this time, this time as you’ve heard was different. For the past six weeks, Iranian women and men across ethnicities and social classes have peacefully protested under the banner of women, life, freedom. These protests have spread across the country and even around the world. In Istanbul and Los Angeles, in Afghanistan and Paris and right here in New York, protestors have gathered inspired by the bravery that they see on the streets of Iran to stand with the Iranian people.

But for all the hope this moment represents, we must also acknowledge the heavy price protestors across Iran have paid. Women like Hadis Najafi who shared this message on TikTok during a protest. She said and I quote, “I hope in a few years when I look back, I will be happy that everything has changed for the better.” Shortly after sharing that message, she was shot dead reportedly at the hands of Iranian security forces. Across Iran, security forces have detained and tortured peaceful protestors. They have killed hundreds of people and badly injured many more in bloody crackdowns. And they have tried to silence dissent by detaining dozens of civil society activists, journalists, and lawyers.

We must condemn these brutal acts of repression and violence. And, more than that, we must back up our words with action. That’s why the United States has sanctioned the morality police and other Iranian security and communications officials complicit in these abuses. That’s why we have supported technology companies helping Iranians communicate with each other and the outside world. And that’s why we strongly support the Special Rapporteur’s call for an independent, international investigation to hold Iranian officials accountable for the violence we’re seeing. And that’s why, as Vice President Harris just announced today, we will work with other Member States to remove the Islamic Republic of Iran from the UN Commission on the Status of Women.

Since 1946, the Commission on the Status of Women has worked to promote gender equality and empower women around the world. This work is vital. It makes a real difference. And it deserves our full support, especially when the rights of so many women and girls are under attack. But the Commission cannot do its work when it is being undermined from within. Iran’s membership is an ugly stain on the Commission’s credibility. In our view, it cannot stand. And while Iran’s systemic oppression of women is not new, thanks to the bravery of the Iranian people, the regime’s abuses have been brought to the fore.

This past weekend, current and former women leaders from around the world issued a public call to action urging UN Member States to remove Iran from the Commission. Leaders from South Africa, New Zealand, Liberia, India, Pakistan, and the U.S., among many others, spoke with one voice, noting that all UN Member States should be outraged by the systemic abuse of women by any country, particularly a Commission member. This is a moment to act with moral clarity. Now, I’ll be honest, this is not going to be easy, and change is not going to come overnight. But right now, the status of women in Iran is the status of women everywhere. Women are counting on us to do the right thing. And so, in the weeks ahead, we will join forces with other Member States with you here in this room who want to protect the power and integrity of the Commission. And we will look for opportunities to raise this issue in every applicable UN forum.

Today, we have gathered Security Council members and many other nations. And we are also working closely with our partners to push for action at the Human Rights Council in Geneva and the Third Committee. As we do all of this, let us look to the example of the courageous protestors in Iran. And let us do everything in our power to ensure that Mahsa’s death was not in vain. Change in Iran should only come from within Iran. But that does not absolve the world of the obligation to stand with the Iranian people as they protest for women, for life, and for freedom.