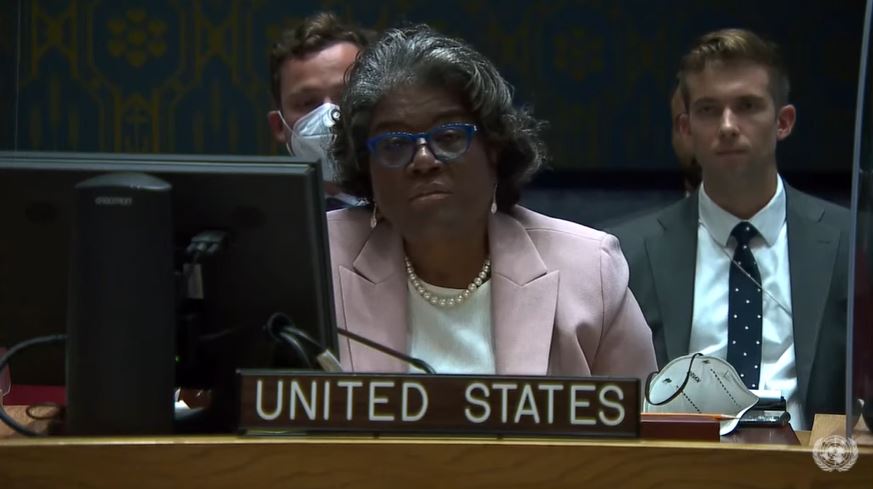 Thank you, Mr. President. Thank you, Under-Secretary-General Griffiths and Deputy Special Representative Potzel, for your briefings.

Mr. President, colleagues, I am glad this meeting was called today. Not for the reasons the Russians requested it, but because the humanitarian situation in Afghanistan is grave, as we heard from UN briefers, and requires our attention.

Flash floods, earthquakes, avalanches, droughts, and terrorism have made a desperate situation more dire. The global food insecurity crisis – exacerbated by covid, climate, and conflict – has been felt acutely by the Afghan people.

You heard the statistics Under-Secretary Griffiths outlined, describing what he calls a “relentless layer of crisis.” The Taliban have failed to provide for the Afghan people. In fact, they have done just the opposite. The Taliban’s policies repress and starve the Afghan people instead of protecting them. The Taliban’s exclusion of outside voices means that the people who would contribute toward alleviating the suffering from these crises are not allowed to help. Among the Taliban’s most egregious actions has been its repression and abuse of women and girls. The Taliban have denied women the opportunity to work, a decision that is both unjust and economically perilous.

In Chicago last week, I met with a refugee from Afghanistan who has found a new life in the United States. But he is kept up at night knowing his wife is still there. She was educated, engaged in the private sector, and contributing to her country. Now she is secluded in her home.

Equally egregious is that girls have not been allowed to return to school. This is both a moral problem and an economic problem. UNICEF estimates the Afghan economy would gain $5.4 billion if the Taliban let girls go to secondary school and join the workforce.

On top of that, the Taliban’s proclamation that it would be best for women to simply stay at home if a male chaperone can’t accompany them means that nearly all female-headed households in the country aren’t getting enough food to eat.

Instead of looking to the international community for help with these crises, the Taliban harbored the leader of al-Qaida in downtown Kabul. How can they expect to build a relationship with the world when the Taliban provides safe haven to those who seek to do harm to us all – and I do mean all of us.

The Taliban has increased taxes on critical assistance. And it fails to protect humanitarian aid workers.

All of which is to say: The Taliban are not providing for the Afghan people in their time of need.

The United States is the world’s leading donor in Afghanistan. This last year alone, we have provided more than $775 million dollars in humanitarian assistance directly to the Afghan people and Afghans in the region. And we are proud to be the largest funder of UN operations in Afghanistan. We have also issued seven general licenses to enable economic activity for the Afghan people. And we are supporting efforts to protect, preserve, and facilitate access to approximately $3.5 billion in Afghan central bank assets for the benefit for the Afghan people.

Let me be clear: No country that is serious about containing terrorism in Afghanistan would advocate to give the Taliban instantaneous, unconditional access to billions in assets that belong to the Afghan people. The countries that have rolled up their sleeves and tried to engage with this issue, like ours, have seen how the Afghan Central Bank was hollowed out long ago. It does not have a credible anti-money laundering system in place. It does not have a credible system for combatting the financing of terrorism. And it does not have an independent monitor in place to verify improvements in capacity through technical assistance. So, the Afghan central bank, on its own, cannot currently conduct responsible monetary policy.

Fortunately, there is one reason the Afghani – the Afghan currency – has held stable: because major donors, including the United States, have generously contributed well over $2 billion dollars in humanitarian assistance and basic needs programming to the country since last August.

Today we have heard Russia say this is not sufficient. Russia argued, as others have in the past, that Afghanistan’s problems are the fault of “the West,” and not the Taliban. Really? Here is my question: What are you doing to help other than rehash the past and criticize others? If you are concerned that Afghan women and children are dying, how are you helping them?

China’s contributions have been similarly underwhelming.

If you want to talk about how Afghanistan needs help, that’s fine. But we humbly suggest you put your money where your mouth is.