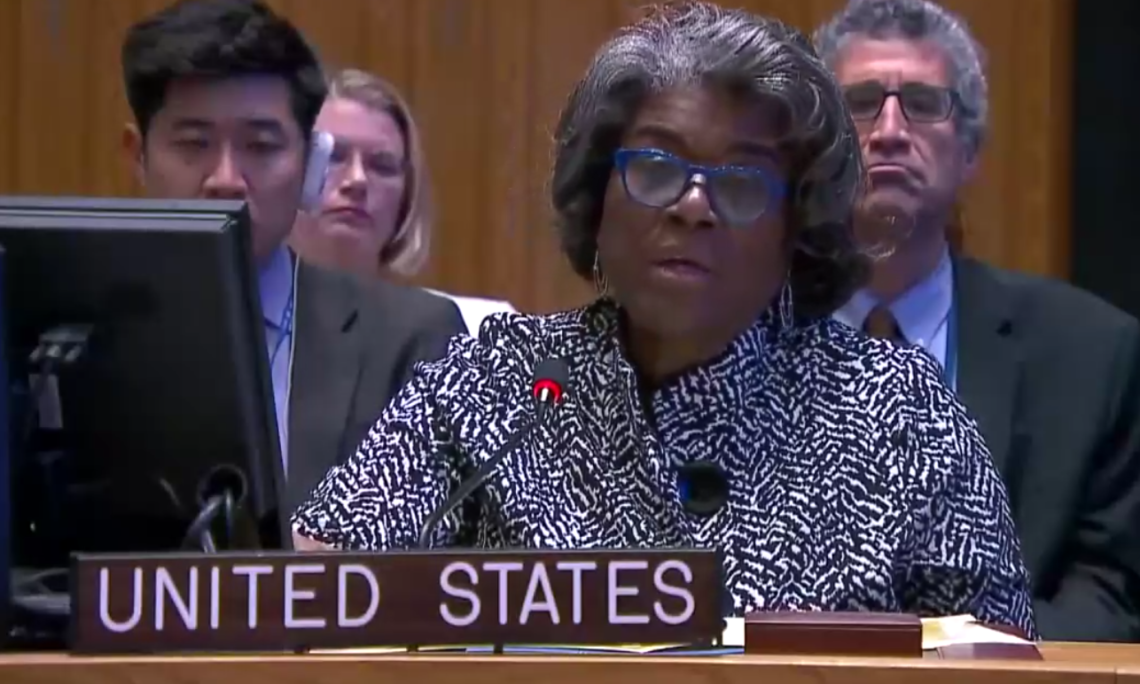 Thank you, Mr. President. And let me thank Under-Secretary-General DiCarlo for your briefing.

And also thank you to President Zelenskyy for joining us today. Your powerful words laid out the devastating consequences of Russian attacks on Ukraine’s critical infrastructure and their unconscionable impact on civilians.

Colleagues, it seems that Putin is determined to reduce Ukraine’s energy facilities to rubble. Putin’s motive could not be more clear and more cold-blooded. He is clearly – clearly – weaponizing winter to inflict immense suffering on the Ukrainian people. He has decided that if he can’t seize Ukraine by force, he will try to freeze the country into submission.

If he gets his way, millions of Ukrainians will be left without power, water, and heat during these cold winter months. Even more families will be forced to flee their homes. Hospitals will be unable to treat patients. And more children and elderly people, especially the sick and those with disabilities, will die. The most vulnerable will pay the heaviest price.

Having struggled on the battlefield, Moscow is now adopting a cowardly and inhumane strategy that punishes Ukrainian men, women, and children. Let’s be clear: these are attacks on critical infrastructure. And they are a shameful escalation in Russia’s already brutal, unjustifiable war.

And as we know, the impact of this war is being felt beyond Ukraine’s borders. After this latest barrage of missile attacks, many Moldovans were left without power. And Russia’s war of aggression is making it harder for Ukraine to harvest, store, and transport the grain products that so many Middle Eastern and African countries rely on.

We cannot overstate the catastrophic scale and cruelty of these attacks. Attacks that are part of a sick pattern of abuses against the people of Ukraine. This Council has seen video images of the horrors of Russia’s war. And just today, we’ve seen media reports, and we’ve just heard from the Under-Secretary-General, that a Russian missile killed a two-day old baby in a maternity hospital in southern Ukraine.

We must clearly and unequivocally condemn violations of international law, including international humanitarian law. There must be a mechanism for accountability. And we must do everything in our power to support the Ukrainian people.

And that’s why the United States has contributed over $250 million in winterization-specific humanitarian assistance which will help provide heating supplies, blankets, shelter repair materials, and generators in centers for internally displaced persons and other critical infrastructure sites.

This perilous moment demands a concerned international response. We call on more nations to lend support to Ukraine in the form of equipment and financial assistance necessary to repair and rebuild the energy grid and in the form of air defense capabilities to help Ukraine protect itself from Russia’s air strikes.

I saw this first-hand when I visited Kyiv earlier this month. I was there, in part, to announce additional humanitarian assistance to help Ukrainians during the cold winter ahead. And I made this announcement in front of a group of displaced women and children in a civilian building that had previously been hit by a Russian munition.

What I saw that day was what we still see today: the strength and resolve of the Ukrainian people.

No matter the cold and dark that Putin tries to inflict, Ukraine will continue to defend its freedom, its sovereignty, and its democracy. And the United States and our allies will continue to stand with Ukraine in its time of need for as long as it takes.