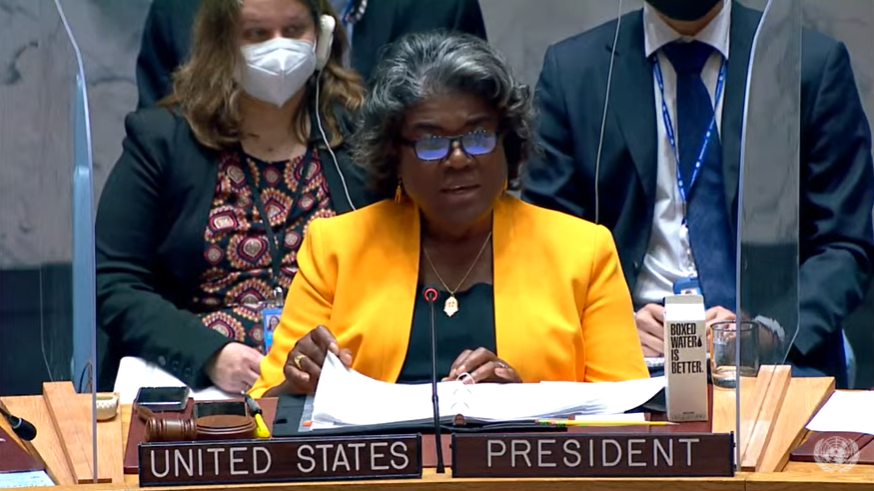 Thank you, so much, High Representative, for your briefing to the Council today. And thank you, President Dzaferovic, for your participation in this meeting. High Representative Schmidt, the United States welcomes your report. Your report is in line with precedent and the requirements of Security Council Resolution 1031. Moreover, your assessments are incredibly valuable. You have ensured that the international community is informed about the situation on the ground. You have done an admirable job under difficult circumstances, and especially as Europe’s security is threatened by Russia’s brutal war against Ukraine.

Twenty-seven years ago, the United States helped forge the Dayton Peace Accords. The Accords remain vital to the maintenance of international peace and security because what was true when Dayton was signed in 1995 remains true today: The sovereignty and territorial integrity of Bosnia and Herzegovina is paramount and unquestionable. But as we have heard today, this hard-fought stability is at risk. We agree with the High Representative’s assessment that this is a dangerous path for all citizens of Bosnia and Herzegovina and the wider region.

Local political leaders are using inflammatory rhetoric, threatening to prevent or boycott elections, and refusing to tackle corruption. The United States condemns this behavior. Specifically, we should all be concerned by steps taken by Milorad Dodik and the Republika Srpska to block state institutions from implementing the will of the people and seize competencies from the state. Republika Srpska authorities are also working to withdraw from the constitutional, legal, and institutional order of the state and establish parallel frameworks.

I want to be clear: These actions are undemocratic. They are escalatory. They are not in the spirit or letter of Dayton. And they jeopardize the health, prosperity, and future of the entire country and its citizens. Calls to obstruct elections or create a new territorial organization by Bosnian Croat leaders are also dangerous and could undermine peace and security in the region.

Unfortunately, all ethno-nationalist leaders, including Bosniak parties, have chosen to employ corruption, fear, and division to stay in power. They have eroded trust in the country’s institutions from within. All of the country’s leaders bear responsibility for the challenges it now faces.

The United States regrets the growing division and rhetoric political parties are using to stoke tensions and distract from other issues, including wide-spread corruption. We appreciate the High Representative’s efforts to calm these tensions and encourage parties to resolve differences through dialogue. Elected officials must return to good governance at all levels of government. Now is the time to advance much-needed progress on needed anti-corruption reforms, democratic reforms, economic reforms, rule of law reforms, and reconciliation.

As we have learned time and again, differences can only be resolved through dialogue in established institutions and not through obstruction and boycotts. Authorities at all levels must continue to fight against corruption, which is robbing citizens of economic growth and a more prosperous future, undermining its institutions, and hindering the country’s chosen Euro-Atlantic path.

The most powerful antidote to corruption is democracy. So, we welcome the decision of the Central Election Commission to call for elections on October 2. We urge immediate allocation of funds to enable the elections to be carried out. It is the basic duty of any credible democracy to enable its citizens to exercise their right to choose their elected officials.

Finally, we want to emphasize the importance of completing the 5+2 Agenda – the requirements that must be met before the closure of the Office of the High Representative and the country’s transition from international supervision. Until the 5+2 Agenda is completed, the role of the High Representative in ensuring the full implementation of the civilian aspects of the Dayton Peace Accords remain indispensable. We regret the continued attempts by some members of the Council to undermine the High Representative’s mandate and legitimacy to thwart his efforts to bring a permanent, enduring stability and prosperity to Bosnia and Herzegovina and to all of its people.