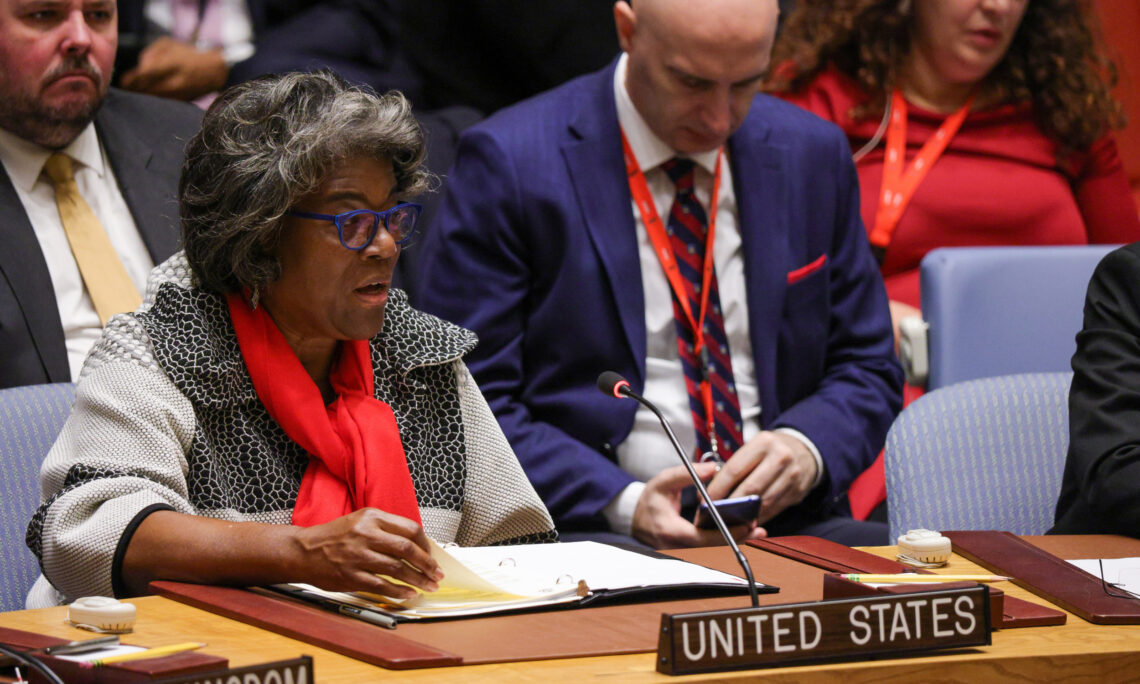 Thank you, Mr. President. And thank you, Under-Secretary-General DiCarlo, for your briefing.

The United States condemns in the strongest possible terms the DPRK’s blatant, brazen November 7* launch of an intercontinental ballistic missile. It is widely reported this missile landed just 125 miles from Japan’s shore. This is the DPRK’s eighth ICBM launch this year, part of an unprecedented 63 ballistic missiles in 2022. That is more than two-and-a-half times its previous annual record of 25.

The Secretary-General’s statement on Friday condemned the DPRK’s intercontinental ballistic missile launch. And it reiterated his call for the DPRK to immediately desist from taking any further provocative actions and fully comply with its international obligations under all relevant Security Council resolutions. It’s time the Security Council make the same call as the Secretary-General. For too long, the DPRK has acted with impunity. It has conducted escalatory and destabilizing ballistic missile launches without fear of a response or reprisal from this Council.

As noted by the Under-Secretary-General, this is the tenth time that we have met without significant actions. The reason is simple: Two veto-wielding members of the Council are enabling and emboldening the DPRK. They have allowed the regime to launch this latest reckless missile test, which endangered the lives of Japanese civilians and needlessly raises tensions in the region. These two members’ blatant obstructionism put the northeast Asian region and the entire world at risk. You simply cannot be considered a responsible steward of nuclear weapons if you condone this behavior.

Colleagues, I have been meeting with Member States across the UN to hear their ideas on Security Council reform. And let me tell you, when they talk about abuse of the veto, they are talking about cases exactly like this one. We will offer another opportunity for the Council to hold the DPRK accountable for its dangerous rhetoric and its destabilizing actions. The United States will be proposing a Presidential Statement to this end.

The Council should be pursuing strong actions, such as a resolution, like the one we brought to vote in May. But as a step forward, we are prepared to take our colleagues up on their assertion that they would have considered a PRST following the DPRK’s March 24 ICBM launch. I encourage and strongly encourage all of my colleagues in this Council to join us in strongly condemning the DPRK and taking actions to curb the DPRK’s unlawful weapons of mass destruction and ballistic missile advancements. And let me be clear. The United States is committed to pursuing a diplomatic approach as we have repeatedly stated. We are prepared to meet without preconditions, and I call on the DPRK to engage in serious and sustained diplomacy. But the DPRK continues to not respond and instead chooses to continue this reckless behavior. The Council must instead respond.