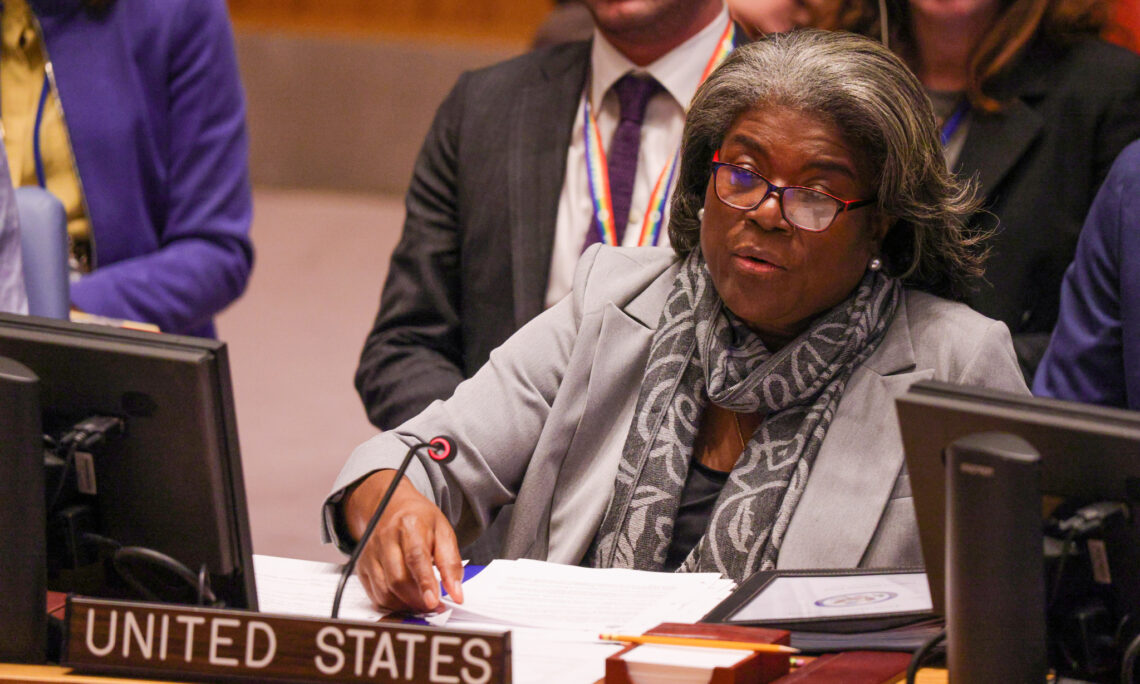 Thank you, Mr. President. And let me thank Special Representative La Lime for your briefing and for your work. I’d also like to thank in advance Madam Kontoleontos of the International Organization of La Francophonie. And I’d also like to acknowledge Foreign Minister Geneus of Haiti and Foreign Minister Alvarez of the Dominican Republic and Representative Fuller of Belize, who is here on behalf of the CARICOM. We look forward to hearing your remarks and your important regional perspectives.

Recently, The New York Times published a heartbreaking story on Haiti. It features Christelle Pierre – a civilian who knows the instability and violence that plagues Haiti all too well. Gang members descended on Christelle’s neighborhood in Port-au-Prince when she was six months pregnant. And in their wake, they left death and destruction. Her neighborhood was burned to the ground. Her husband was shot in the head and left to burn in the street.

Now, Christelle and her newborn baby are homeless – in a country engulfed in crisis. As she told The Times, “There is no shelter, no food, no medicine, no work. There is only chaos.”

Colleagues, if there was ever a moment to come to the aid of Haitians in dire need, it is now. Faced with extreme violence and instability, Haiti’s leaders and people are crying out for help. Haiti’s Prime Minister and Council of Ministers, as well as the Secretary-General, have called on the international community to address the deteriorating security situation and increase our humanitarian support. In response, our teams are on the ground, working alongside Haitian health workers and NGOs to help address the cholera outbreak and assist others in need. And we remain the single largest donor of humanitarian assistance to Haiti.

In the coming days, the United States will deliver additional assistance to Haiti, including critical medical support. We are also deeply focused on the security situation. One way we’ve helped, alongside Canada, was to coordinate the delivery of vital Haitian government-purchased security equipment to the Haitian National Police. That included tactical and armored vehicles and other supplies. This assistance will help the Haitian National Police counter gang violence and re-establish stability and security under the rule of law.

And the United States is proactively going after the bad actors. Our new visa restriction policies target current or former Haitian government officials and other individuals believed to be connected to street gangs and other criminal organizations. There must be consequences for those that support the facilitation of illicit arms or narcotics trafficking.

But a problem of this magnitude cannot be solved by one country or even by a handful of partners in the region. It requires a concerted international response. It requires robust international cooperation. And it requires urgent action by this Council. It is not enough to express our concerns or to condemn the violence. As mandated in the Charter, we need to mobilize the resources and power of this Council and the broader United Nations.

That is why the United States and Mexico have worked closely to draft two new resolutions – resolutions we hope this Council will unanimously support.

The first resolution would impose financial sanctions on criminal actors that are inflicting so much suffering on the Haitian people. It is time to hold them accountable for their actions. It would target those responsible for gang violence, for trafficking arms, for attacking UN personnel, for kidnapping innocent citizens, and for human rights abuses and sexual and gender-based violence. And it would go after individuals blocking Haiti’s ports and the delivery of humanitarian assistance to the Haitian people. The UN sanctions regime aims to stop these criminal actors from having access to reputable financial institutions. And it would work to freeze their assets and prohibit their international travel.

Additionally, its arms embargo provisions would prevent the direct or indirect supply, sale, or transfer of arms to criminal gangs and their leaders, as designated by this Council. The draft resolution specifically lists Jimmy Cherizier – also known as “Barbeque” – as the subject of such sanctions. He is directly responsible for the devastating fuel shortage that is crippling the country. By passing this resolution, we would take concrete actions to hold him – and so many other violent criminals – to account.

The second resolution we’re working on would authorize a non-UN international security assistance mission to help improve the security situation and enable the flow of desperately needed humanitarian aid. This reflects one of the options that the Secretary-General recommended the Security Council consider. This is also a direct response to Prime Minister Henry’s and the Haitian Council of Ministers’ request for international assistance to help restore security and alleviate the humanitarian crisis. And we have also consulted broadly with other stakeholders in Haiti, including civil society and the private sector.

This resolution will propose a limited, carefully scoped, non-UN mission led by a partner country with the deep, necessary experience required for such an effort to be effective. At the United Nations and across the United States government, we will work with partners and other Council members to set defined and specific parameters for the mission, and the United States will consider the most effective means to directly support, enable, and resource it.

This non-UN international security assistance mission would operate under Chapter VII of the UN Charter. And it would facilitate international support to the Haitian National Police, as well as the Coast Guard. By helping improve the security situation on the ground, the delivery of desperately needed aid could reach those in need and address the ongoing cholera crisis. Ultimately, such a mission will rely on support from UN Member States, and this draft resolution explicitly asks for contributions of personnel, equipment, and other resources.

This is the moment for this Council – and the world – to step up.

To be clear, we are keenly aware of the history of international intervention in Haiti and specifically of concerns about the Council authorizing a response that could lead to an open-ended peacekeeping role. This Security Council and the international community must look at its role differently than it has in the past. We must seek a different course, one that can better respond to the humanitarian and security crisis in Haiti and be able to directly address the needs of the Haitian people.

With the dire humanitarian consequences on a level we have not seen previously, we need effective, yet targeted, international assistance. And that needs to be coupled with support for political dialogue and backed by sustained international pressure on the actors supporting gang activity. This will provide the Haitian people with the breathing room they need – breathing room that will allow them to think beyond survival and focus on charting a better future.

Colleagues, a Member State has reached out to us, the United Nations, for urgent assistance. Haiti has come to us in a time of need. As Security Council members charged with maintaining international peace and security, it is our responsibility to come together to help restore peace and security for the people of Haiti. We must work with Haiti to re-establish the rule of law in a way that respects human rights. And we must hold those responsible for so much pain and violence accountable.

These two resolutions will help Haiti build a brighter, more secure future. And I ask all of you for your support.