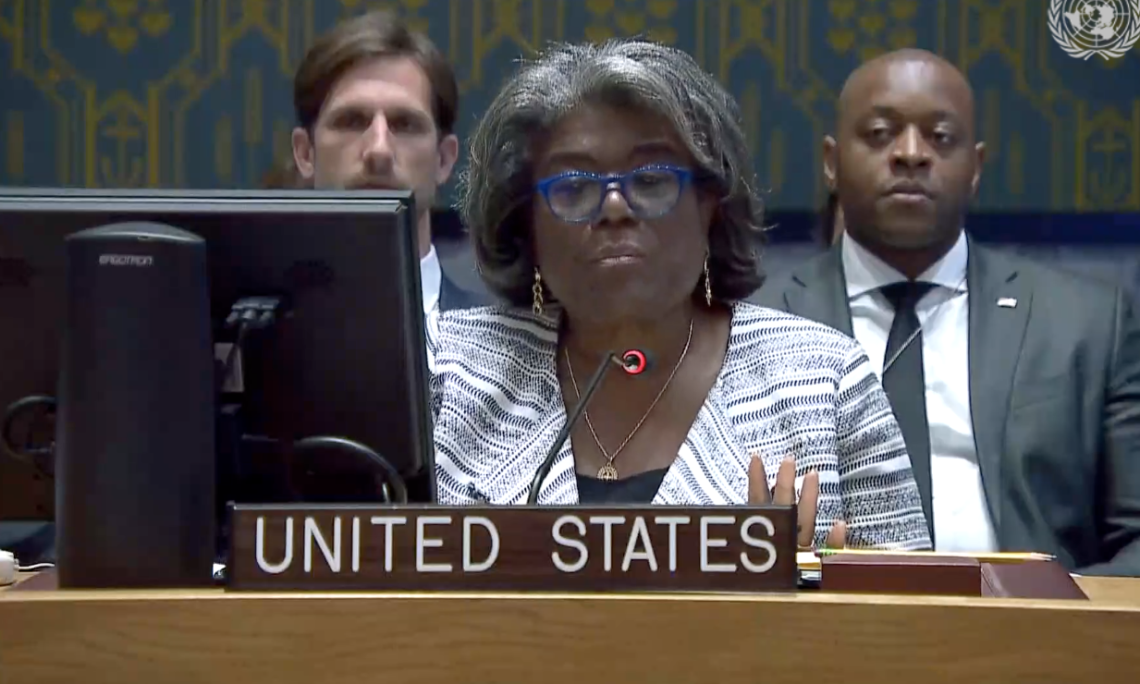 Thank you, Mr. President. Thank you to Ireland and to Brazil for gathering us here to discuss the pressing issues of conflict-induced hunger. And Under-Secretary General Griffiths, Executive Director Beasley, and Chief Economist Torero: thank you for your informative and very sobering briefings.

As many of you have heard me say since arriving in New York, this issue is important. Hunger caused by conflict has been the centerpiece of our two Security Council presidencies since I arrived.

So Under-Secretary General Griffiths, I am deeply appreciative of the White Note your office sent on conflict and hunger. Because while there is a mandated obligation to deliver these reports to the Council, we cannot forget that there is also a moral obligation to tell the world why people are being starved to death. White Notes are the warning siren for this Council. We must respond. Because behind this sobering report and the numbers we heard today, this is about raw humanity.

This White Note makes clear that the scourge of hunger has not gone away since Resolution 2417 was adopted over four years ago – in fact, it has only gotten worse. There are many causes for today’s global food insecurity crisis. Covid has strained supply lines. Energy costs have made it more expensive to produce and ship food. Rising temperatures and severe drought and flooding have destroyed crops and left fields fallow. But chief among the causes of food insecurity are conflicts. In many contexts, food is weaponized for war. It is intentionally blocked or destroyed. This is cruel. It is dangerous. And it demands our attention.

In the case of Russia’s war in Ukraine, this weaponization of food has had global ripple effects. Russia’s war has exacerbated this crisis. Before the war, Russia and Ukraine accounted for almost a quarter of global grain exports. But now Ukraine’s once rolling wheat fields have become battle fields. And the impacts on wheat, food, oil, and fuel are being felt by all of us. And Madam President, if I can respond briefly to a litany of complaints provided by our Russian colleague today, the answer to all of the questions is simple – end the war – end the unprovoked attack on Ukraine and that will get us out of part of this situation.

We can clearly see how conflict is causing hunger across the world. As OCHA’s most recent report highlights, four areas in particular are now projected to face widespread and catastrophic levels of food insecurity: Ethiopia, northeast Nigeria, Yemen, and South Sudan. These are countries where conflict and violence has led directly to a food crisis. In Ethiopia, 20 million people are facing food insecurity. Much more than the current estimates that we have heard. Farms have been damaged and looted. Harvests in Tigray, for example, produced half their typical output last year. And supply lines have been severely disrupted.

We call on the Government of Ethiopia, the Tigrayan authorities, and all parties to allow unhindered delivery of humanitarian relief. Humanitarian assistance should not be used for military purposes — it should be used to save lives. And we urge the parties to cease the fighting and to begin talks under the auspices of the AU as soon as possible. Peace needs to be given a chance. Too many people have died, and too many more are suffering.

In northeast Nigeria, over four million people are projected to experience high levels of food insecurity. The severity in some areas is the highest we’ve seen in almost a decade. Farmers are worried about being attacked. They’re abandoning their farms. That means fewer farms and fewer crops, and more displacement and more suffering. We are particularly concerned about the violence from non-state armed actors. Humanitarian access is vital to keep the situation from spiraling.

In Yemen, the truce has brought some relief to civilians, but it has not been enough to reverse one of the world’s most desperate humanitarian crises. In fact, the level of food insecurity in Yemen remains higher than ever. Over 19 million are facing food insecurity. And it is likely to get worse without humanitarian funding. We call on the international community to join us in addressing this crisis. Donors need to increase and expedite support. We need to bolster the Republic of Yemen’s government to stabilize the economy and strengthen basic services.

And in South Sudan – a country only eleven years old – more than 60 percent of the population are projected to face crisis or worse levels of acute food insecurity. Almost eight million people in a country that is rich in resources. We call on the government of South Sudan to issue a decree mandating the free, unimpeded and unhindered movement of humanitarian assistance and protection for humanitarian workers. It is time for all parties to end hostilities. The government should hold perpetrators of violence accountable. And it should help UNMISS and humanitarian actors address the dire needs of civilians.

And we just heard from Under Secretary Griffiths that famine will happen in Somalia. These are just a handful of the countries facing food insecurity.

According to the World Food Program, up to 50 million people in 45 countries are right on the edge of famine and risk being tipped over without humanitarian support. We must act. I was recently told that addressing famine is not the responsibility of the Security Council. But I would posit that the causes of famine and the consequences of famine are our responsibility, particularly when famines are driven by conflict – and induce them. Which is why, exactly, we have come together today.

For our part, since February, the United States has provided over $5.7 billion in humanitarian assistance to food security operations. But we know we can’t do this alone and we know its not enough. That’s why, in New York, we brought together partners from around the world to craft a Roadmap for Global Food Security. One hundred and three countries have now signed on to a common picture of this crisis and a common agenda for addressing it.

This upcoming UNGA, food security is one of our top three priorities. We will continue to use every diplomatic tool in our arsenal to tackle the food insecurity crisis head on. And we call on every other country to do the same. While the challenge can feel overwhelming, we must remain focused, and we must stop famine before it happens. We can, and must, stop these famines from happening again. Thank you.