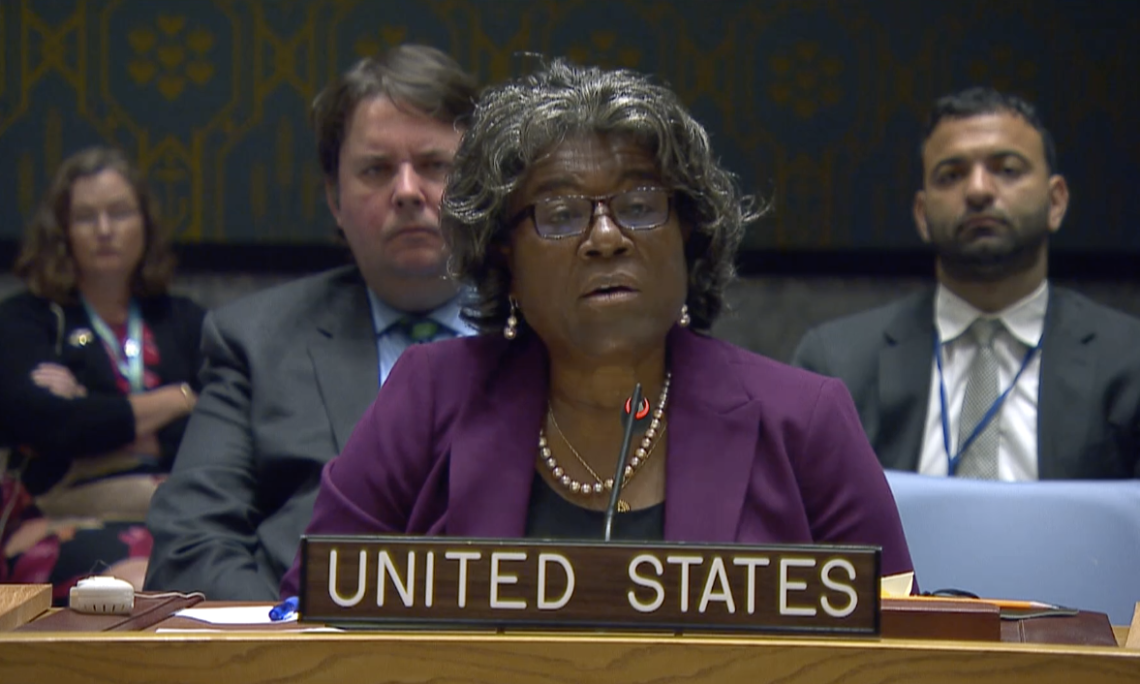 Thank you Mr. President and I thank, the Secretary-General and Ambassador Zlauvinen for your briefings and for your steadfast commitment to furthering multilateral diplomacy.

Colleagues, we live in a world where our greatest challenges are shared, and global challenges require global solutions. That is what makes multilateral institutions, such as the United Nations, so valuable.

The UN, unlike any other institution, can galvanize the world toward better ends. We can promote human rights. We can protect innocent civilians, and we can provide humanitarian relief – and we can save lives. We can strengthen sovereign equality and human flourishing, deter threats to peace and security, and work toward a more equal and more just world. But success requires good faith. It means not just quoting the UN Charter, but actually abiding by its principles in practice.

And it requires us to hold Member States accountable – vigorously and consistently – when they violate the Charter and the principles it stands for. Unfortunately, one of the greatest threats to our success – to maintain peace and security – is from within. At the top of the list is the full-scale invasion by Russia, a permanent member of this Council, of its sovereign neighbor and fellow UN Member State, Ukraine.

Before Russia’s unprovoked invasion, the United States, Ukraine, and its neighbors, as well as other member states, undertook intensive diplomatic efforts to dissuade Russia from choosing a path of force and violence. We convened dialogues at high levels across a range of international venues – including in this Council – to voice concerns about the security situation, and to discuss potential measures to revitalize Europe’s security architecture. Russia, however, rejected dialogue, discarded established views of sovereign equality, discarded the concept of indivisibility of security, and launched a horrific war.

Russia has justified its actions by attempting to redefine basic concepts like sovereignty, territorial integrity, and the indivisibility of security. It has done so by asserting that it is Moscow’s prerogative to dictate the political and security choices of its neighbors.

Russia is fond of saying that the security of one state cannot come at the expense of others. But Russia’s tortured, full-throated messaging on the supposed threats it faces from its neighbors omits the fact that all nations have the right to choose their security alliances. Russia’s interpretation of “indivisible security” does not justify one country’s attempted annexation of another. This goes against not only the principles, but the explicit words of the UN Charter and its allowances for mutual self-defense arrangements.

Russia’s selfish desire to invade its neighbor and steal its land has had implications for us all. It has exacerbated global food insecurity. It has launched a new refugee crisis. It has led to the deaths of tens of thousands of Ukrainians and Russians. And it has degraded the bedrock principles that have prevented new world wars.

The greatest mistakes of the 20th century came from the age of empires, when countries and people were not free to make their own sovereign determinations about their societies, economies, partnerships, and alliances. We cannot make those mistakes again.

And finally, we came away from the 20th century in agreement that existential threats, like nuclear proliferation, needed to be monitored together. That we should use institutions and mechanisms established by the UN Charter, like the Security Council and General Assembly, to address these shared challenges to peace and security.

That is the message President Biden and Secretary Blinken delivered just a few weeks ago at the onset of the 10th Treaty on the Non-Proliferation of Nuclear Weapons Review Conference. The United States will continue to support the NPT, which remains the cornerstone of the nuclear nonproliferation regime.

At the Review Conference, we are seeking a consensus final document that preserves the integrity of this essential treaty and strengthens its implementation across all three of the Treaty’s pillars to accomplish concrete and practical ways to move forward. It is also important that the Review Conference acknowledge the manner in which Russia’s war and irresponsible actions in Ukraine seriously undermine the NPT’s main purposes.

That is why we believe resuming mutually-beneficial inspections under New START, or Strategic Arms Reduction Treaty, is a key part of our cooperation that must continue. We are ready to negotiate, expeditiously, a framework to replace New START in pursuit of further bilateral strategic nuclear arms reductions with Russia.

We are prepared to work with all countries on risk reduction and strategic stability efforts, and we will continue to support the entry into force of the Comprehensive Nuclear-Test Ban Treaty. And we are eager to begin working with partners to restart negotiations this year on the long delayed Fissile Material Cutoff Treaty.

These global challenges require global solutions. They require good faith and adherence to established norms and international law. They require commitment and perseverance, which too often are in short supply.

But we have to persist. Because our collective security hangs in the balance.