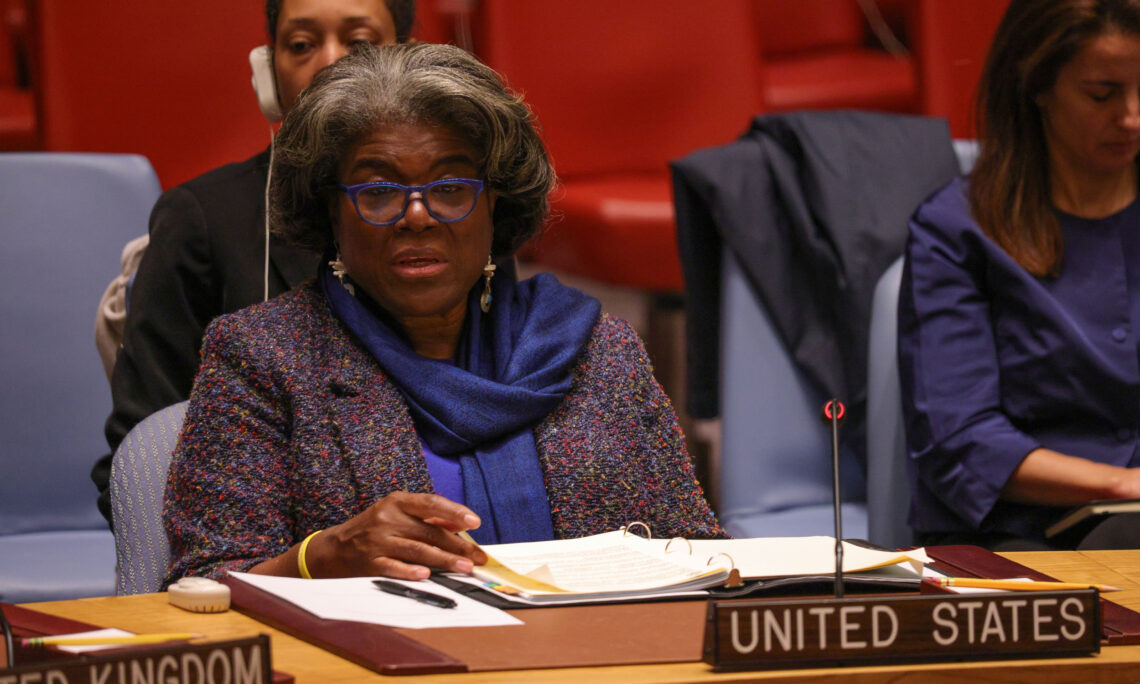 Thank you, Mr. President. And let me thank, Special Representative Wane, for your informative briefing, and for your efforts to bring peace to Mali.  It is clear from your report that MINUSMA continues to make vital contributions to Mali’s security, peace process, and democratic transition despite the unprecedented challenges the mission now faces.  I also want to welcome Foreign Minister Diop to our meeting today and look forward to your briefing at the council as well.

I want to begin by expressing my deep condolences, as you’ve heard from others., to the families of the victims of yesterday’s brutal attack on MINUSMA personnel. This is not the first time this has happened, but it has to stop. We must continue to press for concrete action to ensure the safety of peacekeepers, in Mali and around the world. And in this vein, we must work together to ensure the freedom of movement of MINUSMA personnel throughout Mali.

Ongoing restrictions against MINUSMA and UN personnel including no-fly zones, visa denials, and refusals of ground patrols and flight clearances have severely impacted the mission’s ability to fulfill the tasks that this very Council has mandated.  Attempts to obstruct MINUSMA’s important and often life-saving work to protect Malian civilians and investigate violations of their rights are simply unacceptable. Not only do these restrictions put Malian civilians at greater risk, they compromise the safety and security of MINUSMA personnel. Personnel who bravely serve in the UN’s most dangerous peacekeeping mission.

The efforts of MINUSMA to protect civilians in this volatile region – and its work to facilitate inter-communal dialogue, defuse tensions, prevent conflict at the local – level deserve our full support. And those impeding MINUSMA’s ability to anticipate, deter, and effectively respond to threats against civilians are playing with fire. Their actions actually allow violent extremist groups to conduct attacks against civilians, peacekeepers, and Malian forces.

We implore the transitional government to lift all restrictions against MINUSMA and allow the mission and the mission’s personnel to safely do their jobs. And we condemn the uptick in disinformation campaigns, which sow distrust and erode local confidence in MINUSMA. These obstructionists of MINUSMA’s operations threaten the mission’s mandate to monitor and investigate allegations of human rights violations and abuses against Malians. And this work has never been more critical.

We are appalled by reports of human rights violations and abuses allegedly perpetrated by violent extremist groups and by Malian armed forces in partnership with the Kremlin-backed Wagner Group, as we heard from previous speakers earlier. And we call for those responsible to be held accountable.  Wagner forces will not bring peace to Mali – only exploitation and instability.  And human rights abuses and violations in the name of “counterterrorism operations” only deepen mistrust of state authorities and they play into the hands of violent extremist groups, who recruit among the aggrieved and disillusioned. We are also deeply concerned that the presence of Wagner forces obstructs the implementation of the Accord. In central Mali, the continued absence of state services and authority combined with a lack of overarching vision for this region, has continued to fuel a vicious cycle of instability.

We urge the transition government to accelerate efforts to restore its presence in the Center and to implement the recently approved draft Strategy for the Stabilization of the Center and the 2022-2024 Action Plan.  In light of the challenges facing MINUSMA and Mali, I want to stress the United States has a strong desire in support of the Secretary-General’s internal review to offer a candid assessment of MINUSMA’s ability to fulfill its mandate. And we hope to see a broad range of options for the future of the mission.

But while the challenges facing the MINUSMA are indisputable, we should all be encouraged by recent developments. Though limited and long overdue, the transition authorities in Mali have made progress toward restoring democracy, civilian rule, and constitutional order including by adopting a new electoral law and submitting a draft constitution. We urge the transition authority to overcome internal political rivalries to accelerate the transition process. Leaders must prepare for and complete the constitutional referendum and local, legislative, and presidential elections.  The Malian people who have put their faith in transition leaders to peacefully restore democracy within the agreed-upon timeframe deserve nothing less.

We also welcome the increased representation of women on the Agreement Monitoring Committee. This is a positive step toward ensuring the full, meaningful, and equal inclusion of women in the peace process and throughout the electoral transition.   And the United States commends the Algiers Accord’s signatory armed groups for resuming the regular functioning of the bodies charged with implementing the agreement, following an almost year-long hiatus.

As the Secretary-General notes, these fora are critical to the peacefully resolving disputes between the parties.  But we were alarmed to learn that the Malian armed forces had clashed with a signatory armed group for the first time since 2017.  A return to hostilities among the parties would have unthinkable consequences for the stability of Mali and the broader region. Such conflict must be prevented by accelerating the implementation of the peace accord.

Colleagues, we support the people of Mali. And in that vein, I want to again express our strong support for MINUSMA’s peacekeepers, who serve with dedication in spite of serious challenges to protect Malian civilians.  And I want to reiterate that, for the sake of their own safety and security but also the viability of this mission they must be allowed to perform their duties without obstruction. Thank you.