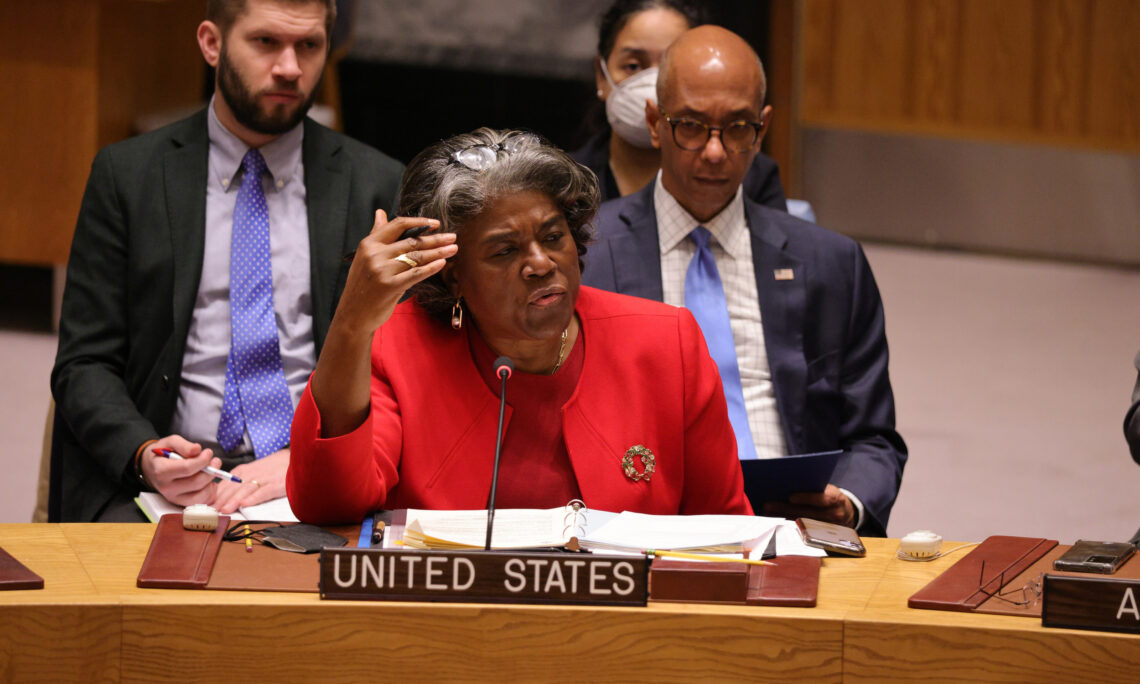 Thank you very much, Minister Jaishankar, and thank you for choosing to focus on the future of multilateralism and the importance of UN reform during your presidency. I’d like to welcome you here in India’s last month on the Council and congratulate India for a successful two-year tenure on the Council. And thank you, Secretary-General, for your briefing, and President Kőrösi, for your briefing and efforts to advance a UN that is flexible and that is fit-for-purpose.

What does it mean for a 77-year-old institution to be fit for purpose? What is, ultimately, the purpose of the United Nations? In 1945, when delegates from around the world met in San Francisco, President Truman outlined that purpose in his opening remarks. “This conference,” he said, “will devote its energies and its labors exclusively to the single problem of setting up the essential organization to keep the peace.”

To keep the peace. That was our original purpose.

Of course, we have not always succeeded. Wars have still started, including one by a permanent member of the Security Council this past year. Deadlock has often prevented progress. Human suffering has persisted. But at the same time, we have also seen enormous success in realizing the original vision of the UN Charter. A vision that expanded beyond maintaining peace and security to include human rights, the rule of law, and development.

These are remarkable accomplishments. But with the state of the world today, they cannot leave us satisfied. We have to contain climate change, eliminate the COVID-19 pandemic, and end the global hunger crisis. We have to defend human rights. Improve humanitarian efforts. Address persistent pandemics*. Prevent the next pandemic. And, most important of all, defend the UN Charter and hold those who seek to undermine it accountable.

To do this, the United States believes we can and must advance an affirmative agenda for the future of the United Nations. Our hope is to build consensus around a future we collectively seek. A future where we all uphold the UN Charter. A future where we solve the consequential global challenges of our time, like food security, global health threats, extreme poverty, sustainable development, and conflict mediation. A future where we safeguard our shared and interconnected resources. A future where we champion universal respect for human rights.

To see this future, we need to strengthen the United Nations. So, the United States is pursuing a UN modernization agenda consistent with this vision, one that includes Security Council reform. That is why, during a visit to the UN’s birthplace in San Francisco, I laid out our six clear principles of responsible behavior for Security Council members, including our commitment to refrain from the use of the veto except in rare and extraordinary circumstances.

These are standards we are setting for ourselves – and that we welcome all of you to hold us to. It’s why we were proud to co-sponsor an initiative by a group of forward-leaning countries, spearheaded by Liechtenstein, that requires the General Assembly to convene a meeting after any veto has been cast.

And it is why, at this year’s General Assembly, President Biden announced that the United States supports Security Council expansion in both permanent and non-permanent categories, including permanent membership for Africa, and for Latin America and the Caribbean.

As you know, I have begun a series of wide-ranging consultations with Member States, regional blocs, and reform groups to discuss both expansion proposals and other ways to make the Council more effective, transparent, and inclusive. We are open to creative ideas and to credible, sensible, and politically viable paths forward. This is a listening tour to hear ideas – from all members, as it is critical that everyone sees themselves in the process.

I’m looking forward to continuing these engagements, including through the Intergovernmental Negotiations process. I’m thankful to the incoming IGN co-chairs, Kuwait and Slovakia, for answering the collective UN membership’s call for change, and I look forward to working together in the months ahead.

Of course, the United Nations is not only the Security Council. Far from it. And just as the Council needs to be updated for our modern era, so too must we reform and reinvigorate the UN system more broadly. We need to develop a more robust and responsive global health security architecture to prevent and respond to future pandemics. We need to make the UN development system more coherent and accountable. We need to make the UN humanitarian system more responsive, effective and efficient, to meet the extraordinary humanitarian needs brought on by conflict, displacement, migration, and a rapidly changing climate.

The Secretary-General’s initiative, Our Common Agenda, is a welcome vehicle for this conversation. Thank you, Secretary-General. We believe it can serve as a foundation for this important discussion and the work ahead.

This next year, let us commit to doing this work. Let us build a new consensus, one that will propel us toward the Secretary-General’s Summit for the Future with both a renewed commitment to the Charter and a shared vision for a stronger UN system. Let us build a United Nations for our children, and their children, for them to be proud of – one that fosters a more peaceful, more open, more prosperous world for us all.