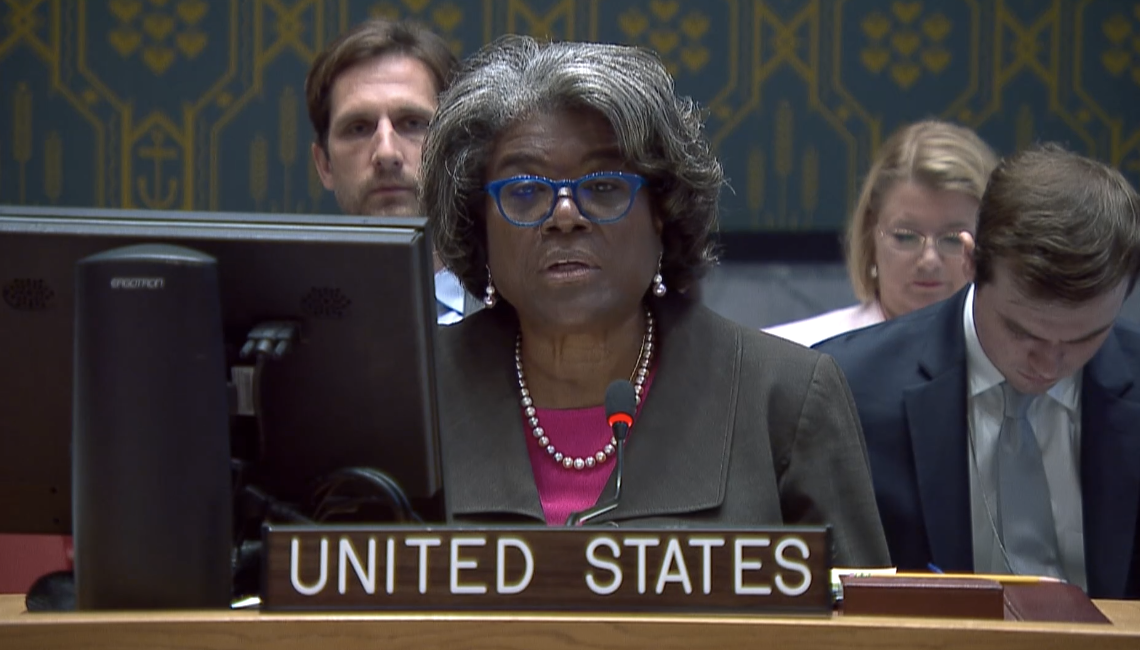 Thank you, Mr. President and let me thank Deputy Special Envoy Rochdi and Under-Secretary-General Griffiths, for your briefings.

I also deeply appreciate the briefing from Mazen Darwish. Mazen, your advocacy to promote freedom of expression and dialogue in Syria is admirable – and an important reminder for all of us. The Syrian Center for Media and Freedom of Expression holds the distinction of being the first Syrian NGO to ever be granted UN accreditation. We are so grateful for the work you continue to do.

As our briefers have outlined, the Syrian people remain in peril. The Assad regime and others have made little progress in addressing the political situation as envisioned in Resolution 2254. And it is painful to hear about the further deteriorating humanitarian situation on the ground.

The new cholera outbreak just reported by Under-Secretary-General Martin, and recently also reported by UN Resident and Humanitarian Coordinator Riza poses a grave threat to Syria’s people. This is yet another crisis facing the Syrian people who have had to endure over 11 years of conflict.

This new assistance will bring immediate relief to millions of refugees and displaced persons. It will help humanitarian partners provide clean water, food, hygiene and relief supplies, shelter, protection services, and critical health and nutrition assistance. And it will include support for early recovery programs across the entire country.

And in case it is not clear, let me say it directly: this funding shows just how urgent and dire we believe the situation is – and how committed we are to the full implementation of Resolution 2642. This assistance will touch the lives of Syrians in all 14 governorates. It responds directly to the UN’s Humanitarian Response Plan, in which early recovery accounts for over one quarter of its activities.

We remain the world’s largest donor to Syria because we are committed, as I said in San Francisco last week, we’re committed to serving the people of the world. We have not and will not forget about the people of Syria. The U.S. commitment to the Syrian people and full implementation of 2642 is beyond question. But we cannot do this work alone. The needs in Syria are simply too great so we call on other countries to join us in doing more and giving more and giving more.

Even as we work to galvanize more international assistance, we know that only a durable political solution to this conflict will allow the Syrian people to rebuild and recover. A just, enduring peace is the only answer. This Council has clearly outlined a pathway to such a peace in Resolution 2254.

Unfortunately, the Assad regime, aided by Russia, has consistently stalled and subverted these processes, sowing more instability and violence. The unfounded and unnecessary delays in the Constitutional Committee’s work must end.

And while Russia has repeatedly told this Council that the political process in Syria must be Syrian-owned, and Syrian-led, it continues to obstruct the process of the Constitutional Committee for reasons entirely unrelated to Syria. These delays have a human cost. Instability and violence have robbed Syrian refugees of the dream of returning home.

We commend the Member States that continue to host large numbers of Syrian refugees. And while many refugees hold out hope that they will return to Syria, no one should pressure them to risk their lives to do so. After all, more than 130,000 people are still arbitrarily detained or are missing inside Syria. The vast majority of these detentions or enforced disappearances have been at the hands of the Assad regime. And as the Secretary General’s recent report on this issue spells out, the Assad regime has made little progress in addressing detentions and disappearances.

This is not a welcoming environment. Until all those missing or arbitrarily detained are accounted for, we will not – and we cannot – be silent. Internally displaced persons and refugees will not return home as long as they fear for their own safety, and that of their loved ones.

In the meantime, I commit that we will keep up the pressure. We will push for progress. And we will continue to do everything in our power – as we have done today with this new $756 million dollar funding announcement – to support the dire needs of the Syrian people. Thank you, Mr. President.