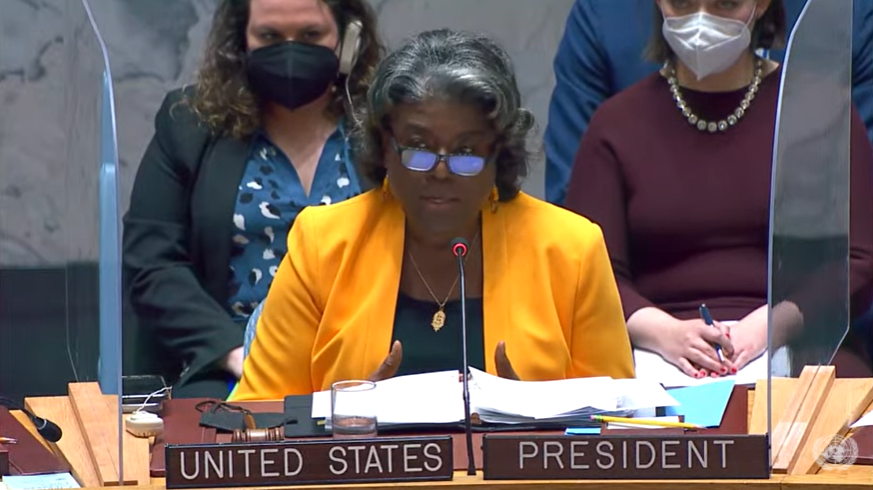 Thank you, Assistant Secretary-General Khiari, for your briefing. And I welcome colleagues from the Republic of Korea and Japan to our meeting, today.

The DPRK has conducted 17 – and I do repeat 17 because I’ve heard different numbers in the room today – they have conducted 17 ballistic missile launches this year alone. At least three were intercontinental ballistic missiles; one was an intermediate range ballistic missile; two were so-called hypersonic weapons; and two were described as a new type of missile for tactical nuclear weapons. The DPRK is also reconstructing its nuclear testing site in preparation for a seventh nuclear test.

All of these ballistic missile launches, as would a nuclear test, violate Security Council resolutions. They pose threats to regional and international security. And they seek to undermine the global nonproliferation regime. This Council should not stand for it. But the Security Council has stayed silent because two Council members have argued that Council restraint will somehow encourage the DPRK to stop escalating and instead come to the negotiating table.

Clearly, silence and restraint have not worked.

In fact, the exact opposite has happened. While the Security Council has remained silent, the DPRK continues to escalate with repeated launches and threatening rhetoric. And let’s be clear: The DPRK is not undertaking its activities defensively in response to threatening behavior. This is a self-initiated, unprovoked campaign of ballistic missile launches that threatens its neighbors and attempts to undermine this Council. In fact, on April 25, Kim Jong Un called for the development of his state’s “nuclear forces” at the “highest rapidity.”  This further proves that the DPRK is not responding to Council silence with restraint or good will.

The DPRK sees that this Council used to respond with meaningful consequences, but it no longer does. So, it interprets Council silence to mean that it won’t face future consequences. And it sees our silence as permission to continue on its stated trajectory.

It is time to stop providing tacit permission and to start taking action.

The United States remains committed to a diplomatic solution. We’ve said that over and over again. We hope the DPRK will accept our repeated offers of dialogue. We have also asked those who regularly speak with the DPRK to encourage them to engage in diplomacy. In the meantime, we have a responsibility to respond to the DPRK’s unlawful behavior. The sanctions regime has been effective in slowing the DPRK’s WMD and ballistic missile advancements. But every sanctions regime requires continued upkeep and ongoing focus on implementation to be successful. It is long past time we updated this one.

Unfortunately, over the last four years, two members have blocked every attempt to enforce and to update the DPRK sanctions list, enabling the DPRK’s unlawful actions. In Resolution 2397, the Security Council committed to take action to further restrict the export to the DPRK of petroleum if the DPRK conducts a launch of a ballistic missile system capable of reaching intercontinental ranges. In full knowledge of this provision, the DPRK moved forward with launching at least three ICBMs this year.

If we want the word of the Security Council to mean anything, we cannot stay silent any longer.

To that end, in order to further restrict the DPRK’s ability to advance its unlawful program and to send a signal to all proliferators, the United States has been negotiating with our fellow Council members on a new Chapter VII resolution. And I am very grateful to my fellow Council members who have taken this issue as seriously as we have and engaged constructively in negotiations. We are now nearing the end of negotiations on the U.S.-proposed draft resolution.  And we cannot wait until the DPRK conducts additional provocative, illegal, dangerous acts – like a nuclear test.

We need to speak up, now, with a strong and unified voice, in condemnation of the DPRK’s behavior. We need to act now to restrict any further unlawful developments before it’s too late. We encourage all Council members to support our proposed resolution and show that the Security Council will respond to threats to international peace and security and to blatant violations of its resolutions.

This is not a bilateral issue. It is not a regional issue. This is a global issue. The DPRK is testing capabilities that can threaten all Council members and every single Member State to the UN, including those who are protecting them. And this is about our collective responsibility to prevent the proliferation of weapons of mass destruction. This Council was formed precisely to respond to the kinds of global threats the DPRK is posing to the world. And I encourage all Member States to join us in denouncing this dangerous and unlawful behavior – and to take action to prevent the worst.

In response to the Chinese and Russian proposal for a draft resolution predicated on their assessment that the DPRK is showing goodwill through a moratorium, as understood by them, on IRBM and ICBM and nuclear tests. The resolution is really not appropriate at this time. The DPRK has shown repeatedly, this year, that such a moratorium does not exist. And in light of the DPRK’s escalating provocations and its return to testing long-range systems, the reported basis for their resolution has no validity. We need to turn quickly to strengthening the 1718 sanctions regime, not considering sanctions relief.

And finally, as I have said repeatedly in this chamber, AUKUS does not violate the NPT – and China and Russia know that. We take our NPT obligations very seriously, and I know the UK and Australia do, too. And it is worrisome that two of our fellow colleagues insist on distracting from discussions on the DPRK’s clear attempt to undermine the global nonproliferation regime with these false claims. These countries’ attempt to defend the DPRK should not go unnoticed by this Council or the world.