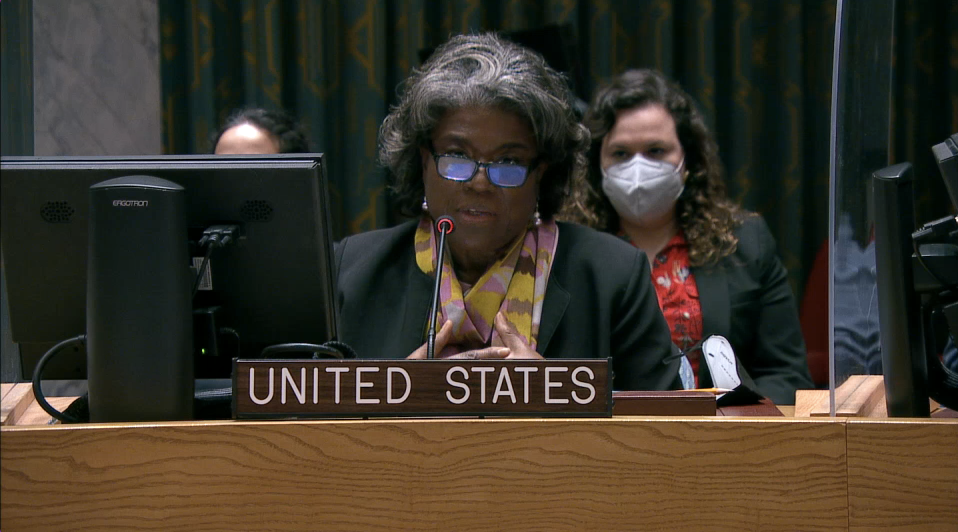 Thank you again, Madam President. Thank you, Under-Secretary DiCarlo, for your briefing. The United States, along with Albania, France, Ireland, Norway, and the United Kingdom, called for today’s open meeting on the DPRK – the first since 2017 – because of the urgency of the escalating situation.

Let me be crystal clear: The United States absolutely condemns the DPRK intercontinental ballistic missile launch on March 24. This launch violated multiple Security Council resolutions. It was an egregious and unprovoked escalation. And it poses a threat to the global proliferation regime and the entire international community. This launch warrants an immediate – immediate – response from the Council. This is the DPRK’s 13th ballistic missile launch this year. The United States and allies assessed that two of these previous launches were also of ICBM systems. The DPRK’s long-range ballistic missile systems can threaten nearly every UN Member State.

Although the DPRK tried to mask recent launches under the guise of supporting a reconnaissance satellite, the March 24 launch demonstrates unequivocally the DPRK’s intent to continue to advance its long-range ballistic missile systems. You may have also seen media reports that the DPRK is reconstructing a nuclear testing site that has been closed since 2018. The imagery and the analysis are alarming. So, it is clear that the DPRK has escalated its provocations with impunity while the Council has remained silent. And it is clear that remaining silent – in the hope that the DPRK would similarly show restraint – is a failed strategy. We must pivot to a successful one. The Security Council must speak publicly and with one voice to condemn the DPRK’s unlawful actions and encourage the DPRK to return to the negotiating table.

The United States remains committed to a diplomatic solution. We hope the DPRK will accept our repeated offers of dialogue. But we also cannot stand idly by in the face of the DPRK’s repeated security resolution violations. We have also heard recent calls for sanctions relief for the DPRK. But why should the Security Council reward bad behavior? The DPRK has broken its self-imposed moratorium on launching ICBMs and has repeatedly shown that it is more interested in advancing its unlawful weapons programs than investing in the welfare of its own people. This is not my opinion. And it’s not a secret. The regime itself openly outlined this strategy in the 2021 Party Congress to develop increasingly sophisticated and advanced WMD and ballistic missile capabilities.

Offering sanctions relief, without substantive diplomatic progress, would only funnel more revenue to the regime and accelerate the realization of its WMD and ballistic weapons goals. It also sends the wrong message to other WMD proliferators: that the Security Council will reward them for repeatedly undermining the non-proliferation regime. Meanwhile, the sanctions regime has undeniably restricted the DPRK’s unlawful weapons advancements. So now is not the time to end our sanctions. Now is the time to enforce them.

The United States calls on all Member States to fully implement the existing Security Council resolutions. And because of the DPRK’s increasingly dangerous provocations, the United States will be introducing a Chapter VII Security Council resolution to update and strengthen the sanctions regime. In Security Council Resolution 2397, which we unanimously adopted, the Council decided we would take further action in the event of a DPRK ICBM launch. This is precisely what happened, so now is the time to take that action. And no matter what, sanctions regimes require regular updating and maintenance to be effective. Now is the time to make these critical updates. So, I call on all my fellow Council members to approach the negotiations on a text constructively toward our shared goal of denuclearization.

Colleagues, this isn’t a bilateral issue. It’s not a regional issue. It’s an issue for all of us. The DPRK’s pursuit of weapons of mass destruction and its ballistic missile delivery systems poses a threat to every member of the global community. History – especially recent history – has shown us that Council silence and sanctions relief does not work. Instead, we must come together – just like we did in 2016 and 2017 – to send an unequivocal message to the DPRK that the Security Council and international community will not ignore DPRK’s flagrant violations of Security Council resolutions and its willful disregard for regional and global stability.

Let us act now, before the DPRK escalates further, to send a message that the Security Council will not waver in its responsibility to protect the world from weapons of mass destruction and maintain international peace and security.