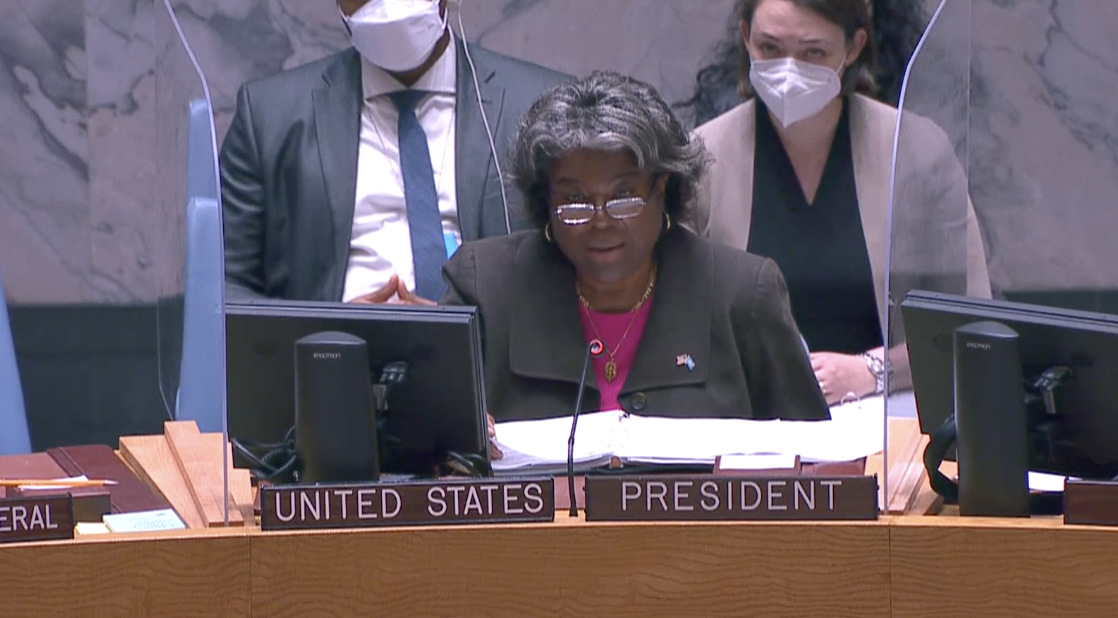 Let me start by thanking briefers ASG Pobee and Special Envoy Xia for your remarks. And I’d like to welcome Deputy Prime Minister and Foreign Minister Lutundula. Welcome your presence here today, along with the Permanent Representatives from Rwanda and Uganda to this conversation.

Deputy Prime Minister and Foreign Minister Lutundula: I greatly appreciate you traveling to be here with us today. The United States values President Tshisekedi’s commitment to strengthening the Democratic Republic of Congo’s democracy and human rights as well as the government’s efforts to fight corruption and protect the environment. You can count on the continued support of the United States for these efforts through our “Privileged Partnership for Peace, Prosperity, and Preservation of the Environment.”

We recognize your government and security forces face enormous challenges to stability, particularly in North and South Kivu and Ituri provinces. We also recognize the urgency reflected by your briefing here today to work to end the decades-long suffering of the people of eastern Congo who deserve peace. To that end, we applaud the diplomatic efforts of the Nairobi peace talks, and the pursuit of lasting peace in the region. We also support the efforts of the African Union Chair calling for peace.

We take note of the DRC recently joining the East African Community. Our A3 colleagues last month described the EAC as “one of the world’s most extensive exercises in the integration of trade, investment, and the free movement of people.” We believe the members of the EAC have a pivotal role to play in ensuring both the prosperity and stability of the region.

In the face of heightened security challenges that the DRC faces – including but not limited to M23 attacks in North Kivu and the influx of Congolese refugees into Uganda in recent weeks – we are encouraged that the DRC Armed Forces have collaborated effectively with MONUSCO forces to contain the various armed groups terrorizing civilian populations in the east.

We are concerned by reports of cross-border attacks on both sides of the DRC-Rwanda border in recent weeks. And we urge the governments of the DRC and Rwanda to engage in dialogue to reduce tension and pursue a diplomatic resolution.

And we urge all actors to prioritize civilian protection. The DRC government should continue dialogue with neighboring countries, especially with regards to M23’s ongoing campaign of violence against civilian populations.

The eastern DRC needs effective regional coordination. It demands the demobilization, disarmament, and community-based reintegration of eligible armed group members. It necessitates the protection of civilians and respect for human rights. And it supports the benefits of DRC’s extraordinary resources be provided to the people of DRC. And it requires accountability for those who have abused and violated those rights. When these needs are achieved, so will peace. We look forward to working with the DRC and other partners toward that end.

By United States Mission to the United Nations | 31 May, 2022 | Topics: Highlights, Remarks and Highlights