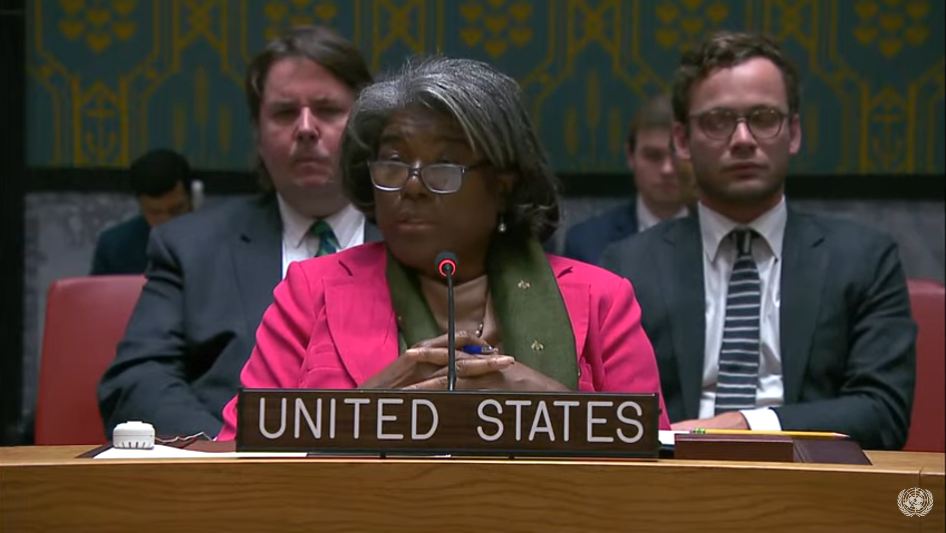 Thank you, Mr. President. Thank you also, Assistant-Secretary-General Khiari, for your briefing. And I welcome the participation of the Permanent Representatives of Japan and Republic of Korea to our meeting today.

And multiple Member States and the International Atomic Energy Agency have reported the DPRK is reconstituting its nuclear testing site in preparation for a seventh nuclear test. Kim Jong Un has called for – in his words – the “highest rapidity” in advancing the DPRK’s WMD program. And he appears to be getting his way.

Since the beginning of this year, 13 Council members have joined us in condemning these unlawful actions and in voting to impose real costs to the DPRK – real costs that would impede its WMD and ballistic missile pursuits. I thank these colleagues that remain committed to upholding the global nonproliferation regime.

But as we all know, the DPRK has enjoyed blanket protection from two members of this Council. These two members have gone out of their way to justify the DPRK’s repeated provocations and block every attempt to update the sanctions regime. In short, two permanent members of the Security Council have enabled Kim Jong Un. And before these two Council members repeat their myth that the DPRK’s provocations are somehow a consequence of hostile U.S. policies and actions, let’s review the facts.

On September 25, the DPRK launched two ballistic missiles in violation of multiple Security Council resolutions. The United States, our allies, and this Council did nothing to provoke this unacceptable behavior.

Following these launches, the United States, our allies, and this Council continued to be vigilant but did not raise the issue immediately. And over the next eight days, the DPRK continued its self-initiated escalations.

So, there is no question the DPRK’s hostile pursuit of unlawful weapons, has been unprovoked. We won’t tolerate any country blaming our defensive actions to respond to the DPRK threats as somehow the inherent cause of these threats.

Despite recent divisions, I believe it is still within our power to come together – just as we did in recent years – when we unanimously responded to the DPRK’s provocation. And we just heard from our briefer the importance of us remaining unified. We can and must return to a time when we spoke with a unified voice against the DPRK’s malign behavior and when we stood together in support of the global nonproliferation regime. This means fully implementing existing DPRK resolutions. It means undertaking sanctions maintenance efforts. And it means pursuing a resolution to address DPRK sanctions evasion activities going forward.

The truth is the DPRK is testing capabilities that can threaten every single UN Member State. That threatens all our individual and collective security, full stop. And by serving on this Council, we have all taken on the weighty responsibility of protecting and defending international peace and security.

So, let’s do our jobs. Let us honor that commitment.