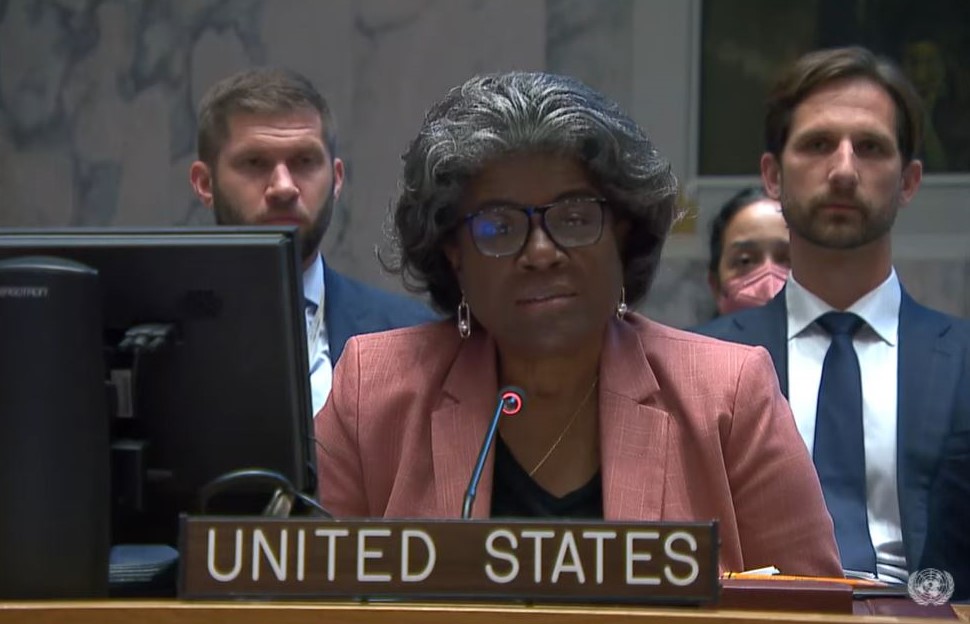 Thank you, Mr. President. Let me start by thanking the Secretary-General for his presence here with us today and for his crucial remarks. Thank you also to Under-Secretary-General Griffiths, for your briefing and the work of OCHA and the UN humanitarian agencies on this very important issue. And I also want to thank Iyad Agha, for bringing the voice of civil society to the Council today.

A little over a year ago, after we unanimously reauthorized the cross-border humanitarian mechanism, I told the Security Council that millions of Syrians could now breathe a sigh of relief. I said that because we put politics aside and came together to address a clear humanitarian need: starving children would receive food; sick mothers would receive medicine; and a population ravaged by COVID would receive vaccines. And while we can and must do more, that’s exactly what happened. The facts speak for themselves.

Last year, the UN-led cross-border response allowed aid workers to reach over 2.4 million people in northwest Syria every single month. It helped feed 1.8 million people each month – pulling children and families back from the brink of famine. And it allowed us to ship essential vaccine doses into northwest Syria.

Earlier this month, I again made a trip to the border of Türkiye and Syria to see the operations of the mechanism for myself, with my own eyes. I saw first-hand what is going across the border – the vaccines, the grains, the diapers, the pouch of ready-to-use therapeutic food that is used to treat children under five years old who are so severely malnourished that they are wasting away.

While there, I saw how the Bab al-Hawa border crossing is one of the most closely monitored and inspected crossings in the world. At the transshipment hub, aid workers confirm the contents of the boxes and seal up the trucks. There are multiple points of verification. Having worked on humanitarian issues for decades, I can tell you that their work really sets a gold standard.

I was briefed on how we have made encouraging progress on cross-line aid deliveries, and I reaffirmed U.S. support for early recovery efforts, which we know continues to be an important component of sustainable response efforts.

In short, we have followed through. We’ve made progress on everything outlined and promised in Resolution 2585. And the United States is committed to making even more progress on all these fronts in the coming year. But as every aid worker told me during my trip, cross-line aid alone cannot come close to meeting the dire needs on the ground. It can reach thousands, but not millions. Much more help is needed.

And tragically, today, the situation in Syria is even worse than it was before. As you just heard from the Secretary-General, people are living on the brink, no longer able to cope. Right now, over four million people in northwest Syria rely on humanitarian assistance. With the global food crisis, malnutrition rates are soaring, and the price of a food basket increased to record levels for the eighth consecutive month. As I heard on my visit, without cross-border aid, many people will die. Babies will die.

These aid workers are supporting a critical operation in a challenging and risky security environment, tragically underscored by the death on June 15 of an aid worker inside northwest Syria. We condemn attacks on humanitarian workers, and it is our mission to ensure they can carry out their lifesaving work. I did my best to reassure those aid workers – and the refugees that I met who are constantly worried about their loved ones in Syria. But the only way we can really relieve their anxieties – and the very least we can do – is to renew and expand the UN’s cross-border mechanism.

When I met with NGOs and I spoke with Mark Cutts, who leads the UN operation on the ground, the message I continued to hear was that the current cross-border operation is not even reaching the “bare minimum” of those who need aid. I heard from mothers in Türkiye that when they called their adult children in Syria, they said they did not have enough food to eat or enough medicines to treat their illnesses.

It is clear that what is needed right now is more cross-border aid, not less. And it is equally clear that failure to renew the border crossing would have dire consequences. UN humanitarian leaders issued a joint statement last week to make that exact point. And they said, such a failure “will immediately disrupt the UN’s lifesaving aid operation, plunging people in northwest Syria into deeper misery and threatening their access to the food, medical care, clean water, shelter, and protection from gender-based violence currently offered by UN-backed operations.”

This is literally a life or death decision.

And I firmly believe, just like last year, we can get this done. Because this is not about politics. This is about continuing to provide humanitarian assistance to millions of people who are counting on us. Some votes we take in this Council are difficult and complex. But this vote could not be more straightforward.

As the Secretary-General stated in his report and remarks today, the humanitarian needs on the ground cannot be met without the UN’s cross-border mechanism. And we know our friends in the League of Arab States also share this view.

Everyone I spoke to during my visit had just one message they asked me to bring back to the Security Council and share with you – they asked us to make a choice to save lives; to make a choice to ensure humanitarian aid continues to flow to those Syrians who most need it. And today, on International Refugee Day, we owe that to these refugees in Syria, and I want to take this opportunity to thank the Government of Türkiye for hosting so many Syrian refugees.

Let us all work together to get this done.