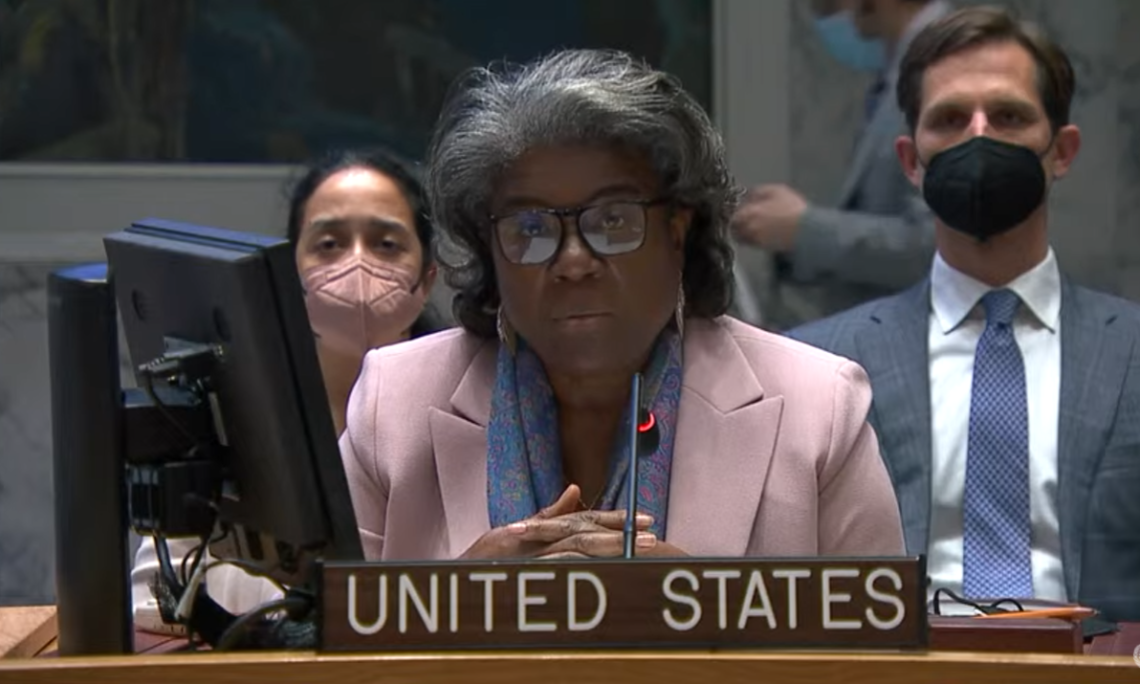 Thank you, Madam President. And I’d like to also thank Deputy High Commissioner Clements and Director General Vitorino, for your informative briefings on the situation on the ground in Ukraine. Right now, your agencies and NGO partners are doing such important, life-saving work. Your teams are putting their own lives on the line as they work to assist others. We were heartbroken to hear about the Caritas International staff that were killed in Mariupol.

I met with Caritas staff when I was in the region, and I saw the lifesaving work they were doing. Their deaths are tragic and unacceptable. Humanitarian aid workers do save lives. They are impartial. And they should be protected – not shelled indiscriminately. As we heard, Russia’s unprovoked, unconscionable war keeps generating new, sobering milestones. As of the latest count, five million refugees have left Ukraine in search of safety. Of course, the number of people internally displaced in Ukraine is even greater. And yes, these numbers are alarming.

Today, I’d like to focus on what we can do to both help refugees and to help those frontline countries protect those searching for safety. I want to start by thanking the countries who have initially taken in the vast majority of refugees. Poland, Moldova, Hungary, Romania, Slovakia – these frontline countries deserve our sincere and heartfelt gratitude for their service and their sacrifice. You have opened your borders and your hearts to the people of Ukraine. And you’ve not just done the right thing, but you’ve also done the hard thing.

I saw for myself when I visited Moldova and Romania, just how difficult and disruptive it can be for societies to integrate so many refugees in such a short period of time. But I speak on behalf of many when I say that you have given us all hope for humanity. You’ve shown the world what it means to be gracious, to be hospitable, to be generous, and to be kind – what it means to be a good neighbor. And I am so glad that many refugees from Ukraine are now being hosted by other European Union countries. That greatly alleviates the impact for all.

For our part, the United States is welcoming up to 100,000 Ukrainians, and we are funding efforts to support all those who have fled Ukraine. As we do everything we can to support Ukrainian refugees, all of us need to provide just as much support, protection, and grace to the many third-country nationals fleeing Ukraine. As I’ve said before, refugees are refugees, no matter their background, their race, their religion or the country they come from. Regardless of their age, their abilities, their nationality. Irrespective of their sexual orientation, gender identity, or creed. Refugees are refugees, period. Upholding the human rights of those in need is of paramount concern, and I’m proud that my government has contributed to these efforts.

National Geographic recently highlighted some of the stories of the refugees fleeing Ukraine. And they featured some of the thousands of Africans, many of whom were students, who were living in Ukraine and had to flee the country. And I was particularly moved by the story of one: a young woman by the name of Blessing Oyeleke. She was a 25-year-old medical student from Nigeria who escaped Ternopil. Blessing had lived in Ukraine for five years and she told reporters: “Coming to Ukraine was like a dream come true to me.” You don’t have to be a citizen of Ukraine to have your dreams dashed or your heart split in half. So, we are beyond grateful to the countries who have shown such generosity and hospitality and let in all those who are fleeing for their lives.

Finally, as Director General Vitorino made clear, we also need to address the threat of human trafficking. Because refugees and other displaced people have limited access to resources and employment, and often lack proper identification documents, they are particularly vulnerable to exploitation, violence, and human trafficking. And as we emphasized last week, 90 percent of this refugee population are women and children. They face immense risks – of being trafficked, exploited, and experiencing gender-based violence. And we must do everything we can to mitigate those risks.

I know some countries, like Poland and Romania, are conducting targeted awareness campaigns and also taking specific preventative measures, like instituting checks at the border, and facilitating access to shelter and transportation. The United States is proud to provide support for those important protection initiatives, both in Ukraine and also in neighboring countries like Romania, Poland, Slovakia, and Hungary. To that end, on my trip to the region, I announced 50 million dollars in additional assistance to Moldova, much of which went to border management and anti-human trafficking efforts.

With so many lives on the line, we must all increase our vigilance and support for anti-trafficking initiatives, as well as resources for survivors and accountability for those who exploit the most vulnerable. We cannot let the world’s most nefarious actors take a horrific situation and make it worse. But we need to work together. Supporting countries, partner organizations, UN agencies need to coordinate to ensure we are doing everything we can to help the countries on the frontlines of this refugee crisis and the millions of people fleeing from violence.

Yesterday, the Secretary General called for a humanitarian pause to allow for humanitarian corridors to open. Everyday I’m asked, “Is the UN – even, is the Security Council – irrelevant to this crisis?” We know that the world is looking to the UN and wondering how to respond in the wake of Russia’s unconscionable actions. Supporting refugees and the countries taking them in is one of the most powerful and immediate ways that we all can help. And it’s so important that the UN plays a key role in that.

So, let’s show the world what we have learned from decades of addressing refugee crises and humanitarian situations. Let’s show the world that when Russia provoked the worst refugee crisis in Europe since World War II, the rest of the Security Council and the United Nations stepped up and helped those most in need.