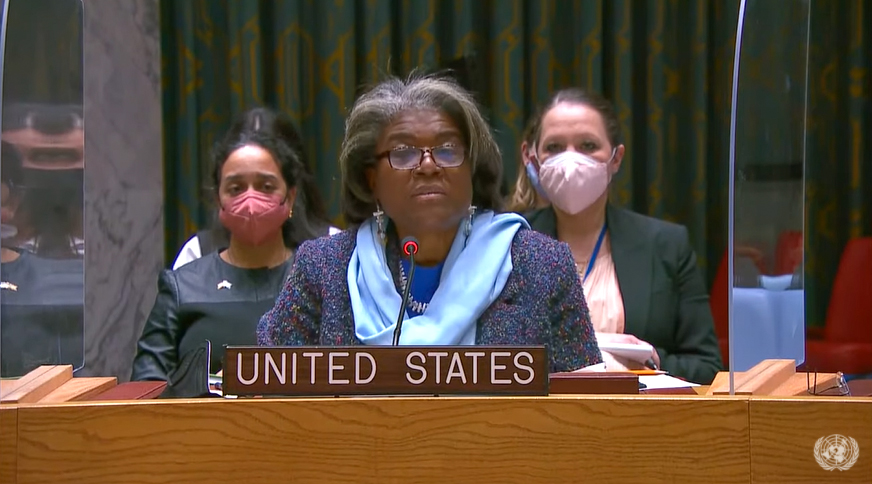 Thank you, Madam President. Thank you, Executive Director Russell, at your first briefing to the Council. We welcome you to this setting. And thank you, also, to Under-Secretary-General Griffiths. Both of your briefings were extraordinarily sobering, but we very much appreciate the work that you do. I also want to say that we are so appreciative and so proud and grateful to UNICEF and OCHA and other humanitarian agencies’ staff on the ground in Ukraine and throughout the region. We’ve seen the images of them coordinating deliveries from bomb shelters and continuing to provide assistance to the Ukrainian people under difficult and dangerous conditions. They are a testament to the life-saving work of the UN’s humanitarian agencies and your indispensable role helping vulnerable civilians suffering the consequences of war.

We are outraged by increased reports of Moscow’s attacks harming Ukrainian civilians in its unprovoked, unjustified war against the Ukrainian people. President Putin’s war of choice has already turned half a million children into refugees. Already more than 1.7 million civilians have fled Ukraine into surrounding countries – and this doesn’t include those who have been internally displaced.

We’ve seen the images of elderly fleeing, a woman killed in her wheelchair, children dying in their mothers’ arms, and a woman being rushed bleeding to a hospital. These are the images we are seeing daily of what is happening on the ground in Ukraine.

Last week, I had the opportunity to speak to my counterparts from Romania, Poland, Hungary, Slovakia and Moldova, where their governments, international organizations, and NGOs have been working nonstop to welcome all those who are fleeing. What I heard was staggering. My Polish colleague, who is sitting in the room with us today, shared that 100 refugees are crossing into Poland every minute – 100 a minute. Just do the math. We talked about many of the challenges these neighboring countries are facing and how the United States can help keep their borders open to all those seeking international protection, including those who may experience communication barriers with border agents due to disabilities or other factors. We are committed to providing support, and we know that their needs will only increase if Russia does not cease its violence.

We know this because of what we’ve seen over the last week – from the reckless attack on Europe’s largest nuclear power plant, to the siege of cities across Ukraine, to the tragic images and alarming reports from those who are unable to leave Ukraine to seek safety. The world is haunted by these images of homes, hospitals, schools, orphanages being destroyed, demolished in front of our eyes, child cancer patients unable to receive chemotherapy, babies delivered in basements instead of maternity wards, and hundreds of thousands of civilians without access to electricity for heat or drinking water to stay alive.

Ukrainian cities are under siege, under relentless Russian shelling. Hospitals are running out of supplies, food is dwindling, and civilian casualties are mounting, while the most vulnerable groups – those with disabilities, the elderly, children – continue to bear the brunt of suffering. We have seen besiegement before – from Leningrad to Aleppo. These are tragedies of immense proportions.

The United States is closely coordinating with the Government of Ukraine, neighboring countries, and international organizations, including those within the UN system, to monitor the situation, and we will work with them to address humanitarian needs both in Ukraine and in the region. While we are heartened by the international community’s pledges of over $1.5 billion in humanitarian support so far, we know that as long as Russia pursues its relentless and brutal campaign, the need for assistance will only increase. We all need to ensure these pledged funds are flexible and mobilized as quickly as possible, given the escalating needs on the ground.

We need Russia’s firm, clear, public, and unequivocal commitment to allow and facilitate immediate, unhindered humanitarian access for humanitarian partners in Ukraine. Very specifically, we call for the Russian Federation to agree to and honor in good faith Ukrainian proposals for time-bound humanitarian safe passage in specific, agreed upon locations. We call for the establishment of a ground-level notification system that will facilitate the safe movement of humanitarian convoys and flights. This is imperative for ensuring humanitarian supplies and commodities can be reliably transported into Ukraine to reach those most in need.

I also want to note today that the United States is increasingly concerned about the protection of civilians in this conflict, particularly women and girls who are vulnerable to gender-based violence, LGBTQI Ukrainians, as well as Ukraine’s population of older adults and people with disabilities. We also call for the protection and care of all vulnerable children, including separated and unaccompanied children and those in institutional care.

The humanitarian toll of President Putin’s war on Ukraine is mounting. Children are dying, people are fleeing their homes – and for what? As UNICEF has reported, we know already that dozens of children have been killed in Putin’s war – and as we work to confirm cases, we know the actual numbers are actually far greater. Young children have also been severely traumatized by the violence and destruction. They’ve witnessed so many things to the point they have stopped speaking. The physical and psychological wounds of this war will be long lasting.

It’s clear Mr. Putin has a plan to destroy and terrorize Ukraine.

If the last two weeks have shown us anything, it’s that the Ukrainian people are not going to give up. And many Russian people themselves, including many Russian soldiers, do not want this war. Unfortunately, Mr. Putin doesn’t seem to be listening and we are concerned that the world needs to be prepared for a very long and very difficult road ahead.

The Ukrainians are defending themselves bravely, and we will continue to stand with them and support them. But President Putin is clearly willing to sacrifice the lives of thousands of Russian soldiers to achieve his personal ambitions. We have been warning Moscow for weeks that, in the end, Russia will be weaker and not stronger for launching this war. This is already proving true. The question is how much devastation President Putin is willing to wreak for this enormous mistake.

We continue to call on Russia to change course, withdraw its forces, deescalate through diplomacy, and we support Ukraine’s call for a ceasefire. In the meantime, we applaud those doing everything in their power to alleviate the suffering Putin has unleashed on the Ukrainian people.